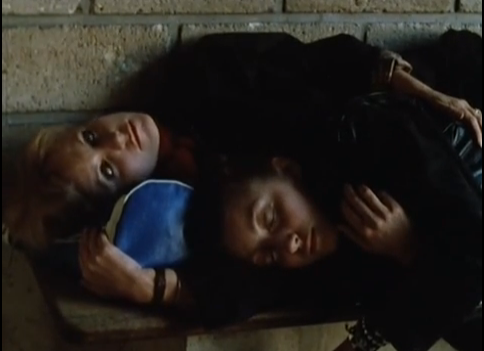 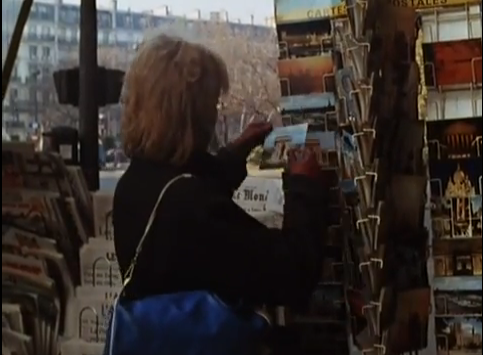 Two women lying next to each other on a bench, wake up. A hard cut to a shot of one of the women approaching a newspaper stand on a Parisian street. She scans the rack of postcards and chooses five with a picture of the Arc de Triomphe. The characters played by Bulle and Pascale Ogier in Jacques Rivette’s Le Pont du Nord (1981) could be described as that classic French type, the flâneur, “masking under multiple impressions the void” felt within and around themselves.2 In Paris s’en va (1981), these unnamed characters appear more like spirits, ghosts awoken from a centuries-long slumber by the expansive construction projects of then-president Valéry Giscard d’Estaing, rising out of the grave to comment on contemporary Paris by way of obscure 18th century poetry.

Production Le Pont du Nord began in October 1980 with a small budget from funds intended to finance a short film for France's Année du Patrimoine coming from producer Henry Chapier-Paris Audiovisuel. In order to deliver the short film required by this initial money, Rivette and his editor Nicole Lubtchansky put together a 30 minute film using alternate takes of scenes from Le Pont du Nord as well as other footage not used in the feature, calling it Paris s’en va3. This film, far more obscure then Le Pont du Nord, is, like other Rivette films that exist as shorter versions of a longer feature4, significantly different from the film it is related to.

More concerned with presence than character, no one in Paris s’en va is ever named. The characters exchange few words on screen. Jagged, abrupt cuts link stunning landscape shots of Paris under construction—buildings being demolished, half-finished bridges often depicted by a panning, tripod-mounted camera—and shots of the city’s monuments, filmed in shaky, handheld tracking shots from a car. Equally abrupt music and voice-over that comes and goes give the film an off-kilter, staccato rhythm.

By its title, Paris s’en va situates itself amongst a body of writing that flourished in France in the late 1800s, during the period of the Haussmann construction projects that were reshaping the Parisian landscape. Beginning around 1860 and continuing into the early 1900s, France saw an explosion of books with titles like Le Vieux Paris s’en va, Paris démoli, Paris qui disparaît, Paris qui s’efface, Paris qui s’en va et Paris qui vient, Paris qui passe, Paris vieux et neuf, Paris perdu, Paris disparu5. Writers, artists and politicians lamented the passing of their Paris, the emergence of a radically altered city: new streets, new building designs, new modes of advertisement like bright paintings on the sides of buildings, streetcars, the metro. Though changes in the city were certainly not new— Haussmann thought of them as a “transfiguration”6—it always being in a state of “perpetual birth and rebirth,”7 they were now more noticeable then ever. With shots contrasting older monuments and buildings being demolished by wrecking balls, Rivette’s film is like a contemporary extension of this literature. Yet the film does not quite feel like Baudelaire’s sad lamentation in Le Cygne. This is perhaps due to its being anchored in another, earlier time period, the 1700s, by way of its extensive voice over that seems to come and go as it pleases. 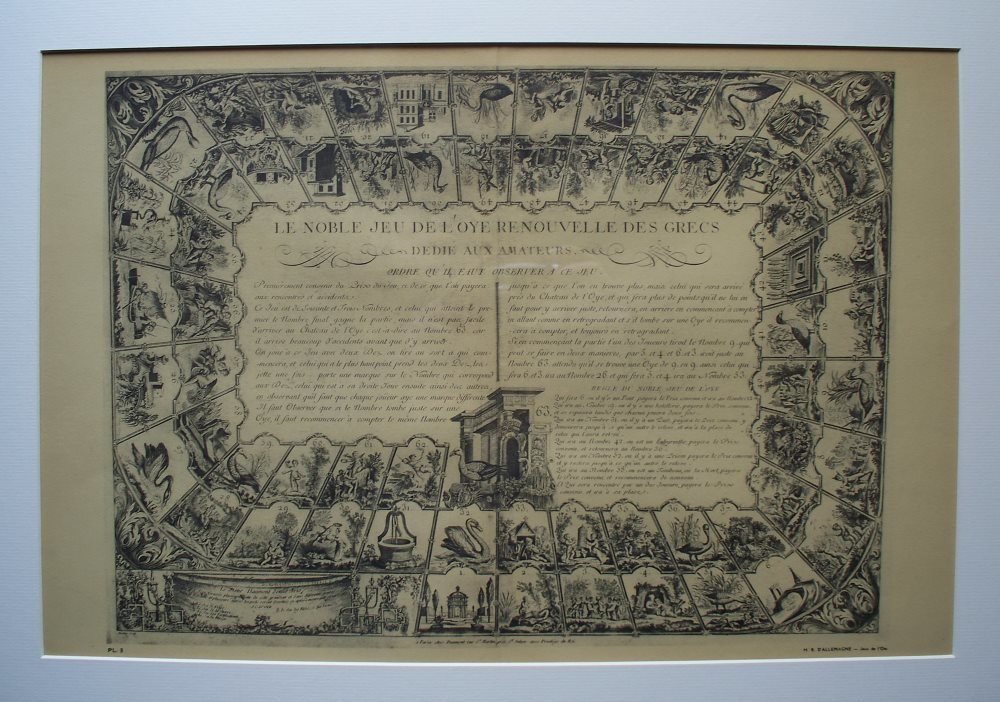 The spoken texts in Paris s’en va form a constellation around what will be a central element of Le Pont du Nord and here acts as a sort of mysterious incantatory gesture structuring the film: “the Noble Game of the Goose, renewed by the Greeks, dedicated to Amateurs.” Dating back to Francesco de Medici, it is a spiral race game with 63 spaces and a number of traps along the way. The numbers in the game originally had a strong cabalistic significance and the placement of the spaces was not accidental but, according to Goose scholar Adrian Seville, “governed by considerations that we would now call 'occult' but which in Francesco de Medici's time would have been regarded as at the forefront of philosophical knowledge […] In its original form, the Game of the Goose is clearly a game of human life.”8 Read off screen in their entirety and repeated multiple times by different voices (Pascale and Bulle Ogier and Pierre Clémenti) from a 1750 version of the game, there is a sense that the events on screen are somehow being governed by these rules and yet the connection remains elusive.

The other texts recited around this central one are equally, if not more, obscure. Selections from the Album of Minerva (“In every country, under every sky, in the North as in the South, among blacks as among whites, in savages’ huts and under city slates, in all times, always and everywhere, games have existed with their appetites, their violence and their excesses”), an excerpt from the memoirs of playwright Antoine-Vincent Arnault about Napoleon’s love of the Game (“Napoleon devoted himself to the Game of the Goose with southern vigor, moving his token’s spaces like a school boy, sulking when the dice went against him”), the 1731 Nouveau receuil de chansons choisies, Joseph-Antoine-Joachim Cerutti’s Portrait of Charlatanism, and more. 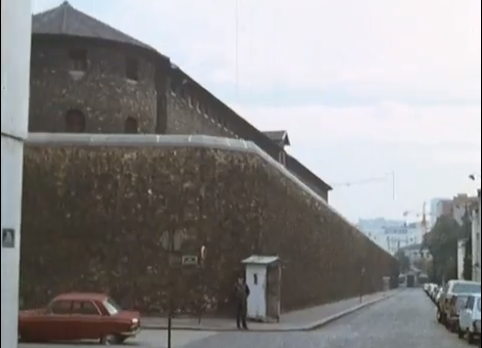 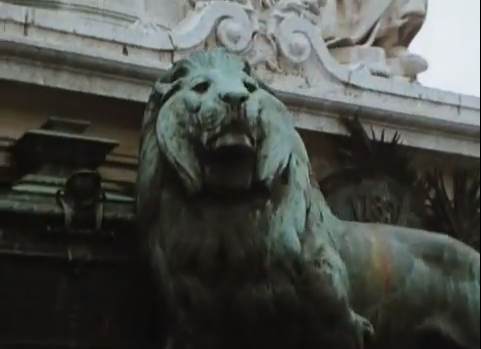 Multiple voices respond to each other and overlap in the intangible off screen space as the camera shakily glides along Parisian streets, caressing the wall of the prison (from which Bulle Ogier’s character in Le Pont du Nord will have just been released) or looking at a statue of a lion from all sides. These ghosts haunting modern Paris, occasionally glimpsed wandering its streets, relaxing next to its monuments, strolling along the Seine, in discrete moments of space and time captured by Georges Prat’s microphones and William Lubtchanksy’s 16mm camera, come and go as they please. Perhaps unique amongst Rivette’s post-Paris nous appartient films for not showing two characters meet and, consequently, engender or destroy a fiction,9 the film nevertheless begins and ends with two characters interacting on screen, passively in the first shot and actively in the last: a 360 degree pan away from Pascale Ogier and Jean-François Stévenin sparring on a bridge to the surrounding buildings. When the camera completes its rotation and returns to its original position, Ogier and Stévenin have vanished. 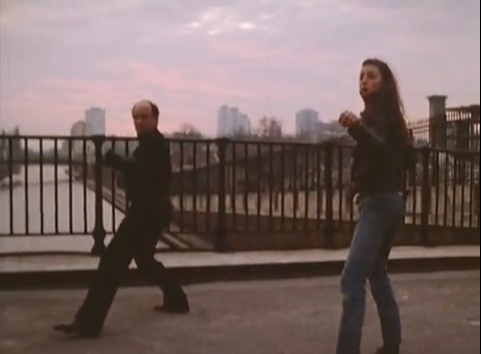 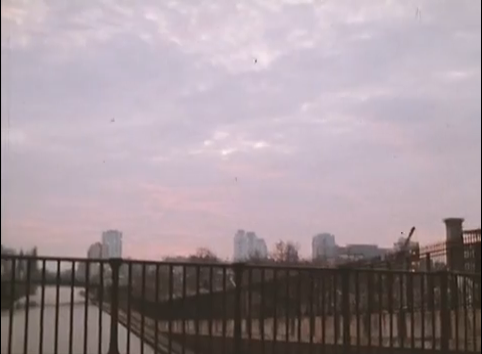 3. “When we were looking in vain for the indispensable, initial, small financing, it happened that there remained at Henry Chapier-Paris Audiovisuel […], in short that Paris Audiovisuel had 15 million (old) francs left to spend for the so-called Année du Patrimoine. Basically, we started with the money from Chapier but, so that the shoot wouldn’t stop after 15 days, Barbet Schroeder raised matching funds from Losange and Lyric. So, we made, at the same time, this short film for the Patrimoine and the feature – the short being made, in any case, in large part with elements of the feature put together in a different way; like a long, more abstract trailer sort of like the avant-garde of twenty years ago, a bit of a joke…” Jean Narboni, Entretien avec Jacques Rivette, Cahiers du cinema, issue 327, September 1981. My translation.

8. Adrian Seville, Tradition and Variation in the Game of the Goose, http://www.giochidelloca.it/scheda.php?id=1429