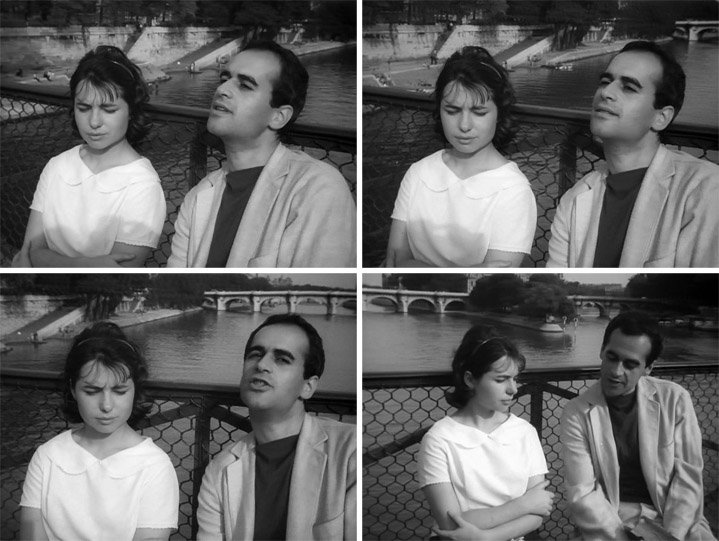 The shadow of cinematographer Charles L. Bitsch and his camera, briefly visible during a dolly shot in Jacques Rivette's Paris Belongs to Us (1961). Hardly a "material object," you'd say, but Rivette's plots are often about the blurred line between the non-existent and the totally tangible, and, like one of his barely-there conspiracies (such as, well, the one in Paris Belongs to Us), the shadow cast by Bitsch beckons to be interpreted in paranoid, metaphorical terms.

Jonathan Rosenabum once described Paris Belongs to Us as the most mature of the Nouvelle Vague debuts, and the most amateurish﻿. It's certainly a film of impoverished means. Though it's hard to find details on how much—﻿or rather how little—﻿it cost to make, the Cahiers du cinéma﻿ group's debuts were all cheapies (adjusted for inflation, the most expensive was probably the half-million-dollar Le beau Serge, with Breathless costing the modern equivalent of about $60,000)﻿, and Rivette's was supposedly the cheapest. And since, unlike Godard, Rivette doesn't try to flip the cheapness into a style / attitude in and of itself, but instead at all times aspires to classicism(1)—﻿﻿dollies, dissolves, clear scene structures—the impoverished means ﻿﻿﻿become visible in every shaky tracking shot, less-than-smooth pan, continuity error, and technical mistake.

A member of Eric Rohmer's Ciné-club du Quartier Latin﻿ and general friend of the Cahiers gang, Bitsch shot Rivette's shorts Le divertissement﻿ and Le coup du berger﻿ (a.k.a. Fool's Mate), as well as Eric Rohmer's Véronique et son cancre﻿; he was Godard's choice as the cinematographer for Breathless, but was replaced with Raoul Coutard by producer Georges de Beauregard﻿. Bitsch would serve as Godard's assistant director throughout the 1960s; Paris Belongs to Us would be his only feature as a cinematographer. The shadow is therefore neatly symbolic of the man himself: a key early collaborator, marginalized by circumstance, whose influence can only be stumbled upon. And even then, like with any Rivettian cipher, you can never be too sure...

1. Rivette's classicism and conspiracy leanings go hand-in-hand, because "conspiracy" happens to be a pretty good definition of classical mise-en-scene. ﻿.