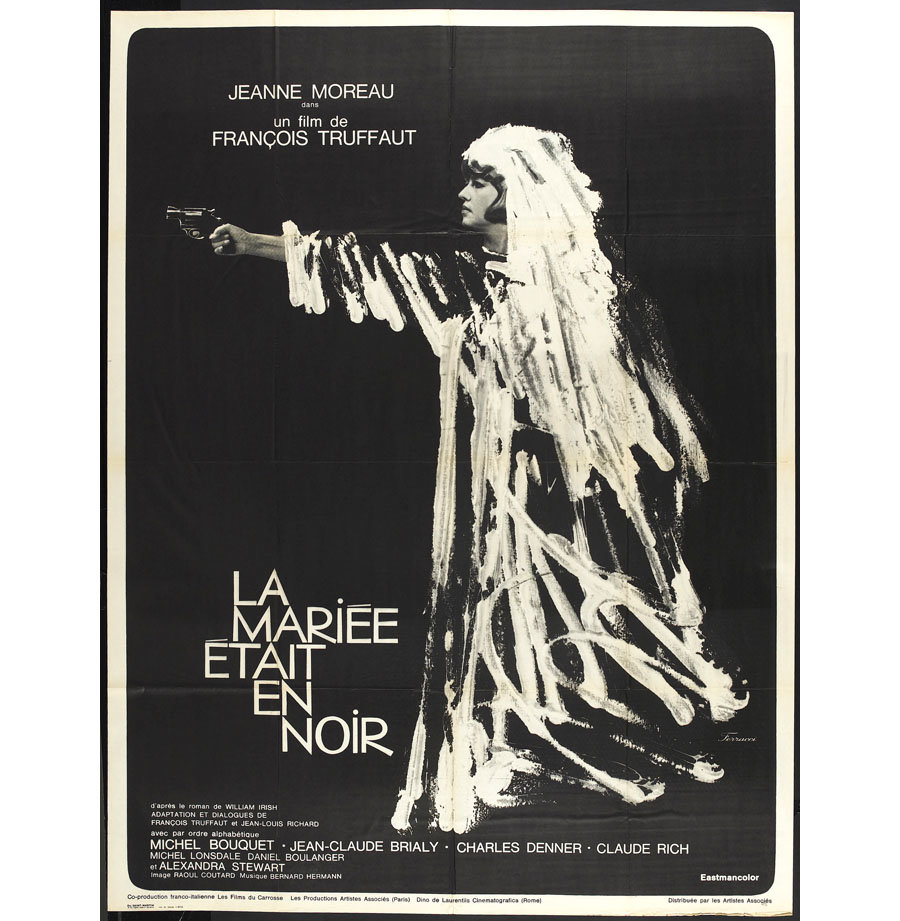 "[T]he shadow of Alfred Hitchcock would loom heavily over the works of the young critics who took up cameras and formed the French New Wave," writes Fernando F Croce in Slant. "Whether direct or circuitous, traces of Hitch can be felt in Godard's insistence on filmic technique visibly and violently manifesting itself, Chabrol's fascination with human duality and repressed beastliness, Rohmer's Catholic examinations of private moralities, and even Rivette's view of a world precariously suspended over various trap doors. Curiously, the upstart who related most ardently to the older auteur was also the one with the least in common stylistically and spiritually: François Truffaut, whose freewheeling camera and affection for hypersensitive characters put him at the opposite side of the spectrum from the implacable visual exactitude and jaundiced worldview which characterized the Master of Suspense…. Think of Truffaut's The Bride Wore Black [1968] as the lumpiest fruit borne out of that union, a frigid and oddly static procession of Hitchcockian shout-outs that plays like an affected sequel to the two filmmakers' celebrated interview book." More from Mark Asch (L) and Joshua Rothkopf (Time Out New York, 2/5). At New York's Film Forum through Thursday. Somewhat related: The New Yorker's Richard Brody on Fahrenheit 451 (1966).

J Hoberman in the Voice on Paul Newman's Sometimes a Great Notion (1971): "The surprise star of BAM's 2008 Newman retro, this generally forgotten, self-directed vehicle returns for a week in a near-pristine studio archival print some 40 years after its original, far from successful release. Adapted from a magnum opus, Sometimes a Great Notion vastly simplifies Ken Kesey's second novel, a mad, LSD-infused synthesis of Faulkner, Kerouac, and Ayn Rand, published in 1964 to severely mixed notices…. Newman, who replaced the movie's original director a few weeks into production, shot his version at the counterculture's high noon, but there's nothing trippy about it. His Sometimes a Great Notion is a New Hollywood movie suffused in Old Hollywood values." More from Stephen Garrett (Time Out New York, 4/5); and Alt Screen has a roundup. At BAMcinématek through Thursday.

See It Big! commands the title of Reverse Shot's series at the Museum of the Moving Image, and that goes double for the two features screening this weekend. The Museum's got a restored 70mm print of Jacques Tati's Play Time (1967), "wasn't made for the screen, but for the eye," argues Julien Allen. "When the camera stops, the eye wanders to all parts of the frame, to spot the minutest details, as one would study a Brueghel street scene." Jeff Reichert: You've seen a movie — probably several — inspired by [David Lean's] Lawrence of Arabia [1962], no doubt. You may well have seen a movie that parodies it, a sincere form of cinematic flattery. You've certainly seen bits and pieces replayed in every Academy Awards montage that runs every year. But if you haven't seen Lawrence on the big screen, then you just haven't seen it all."

Tom Noonan will be at 92YTribeca in just a few hours now for a rare screening of his 1994 directorial debut. Glenn Heath Jr for the L: "Set entirely in a New York City apartment during a date between co-workers Jackie (Karen Sillas) and Michael (Noonan), two lonely professionals meeting on personal turf for the first and possibly only time, What Happened Was... examines the way tone and rhythm define a contained physical space."