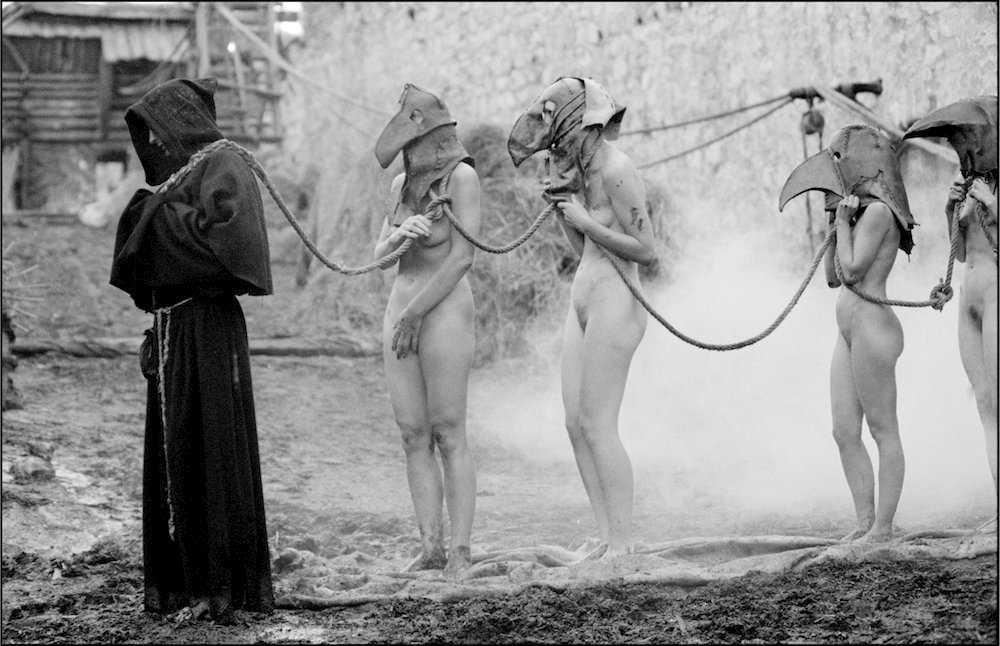 ﻿Bombardment: textures. If you, like many, have been waiting so many years for Soviet/Russian master Aleksei German (My Friend Ivan Lapshin; Khrustalyov, My Car!) to finish what, upon the director's passing last year, has ended up being his final film (with finishing touches by his wife and co-writer Svetlana Karmalita and his son Aleksei German Jr.﻿), you will have to embrace muck. You will have to swim in shit, slather yourself with grime, dirt, and water, enrobe yourself in filthy fog, feel roughened leather, splintered wood, caked and hardened cloth, rusted and creaky iron armor; you will have to embrace the damp, dank, dirty opus of cinema that is Hard to Be a God. It is cinematic texture taken to an extreme.

Based on a 1964 novel by the Strugatsky brothers (literary sources for Tarkovsky's Stalker and Aleksandr Sokurov's Day of Eclipse, among other adaptations), its barely sci-fi premise proposes Earth scientists of the near future travel to a newly discovered planet so Earth-like it resembles our 13th century. In other words, this is a medieval movie, and one thoroughly in the gonzo-sludge-stench category of Monty Python and the Holy Grail, our "middle" history as a decaying, dilapidated heap of the half ruined and all-engrimed. The first catch is this initial sci-fi premise: the Earth men are under ominous, vague stricture neither to use their knowledge nor to impact the world around them, and so are left to wander and inhabit a barbaric land—a land where writings and art are burned, the literate killed, and women are conspicuously rare—as enlightened but inactive aristocrat-gods. The second catch is that the film is by German, who brings his overwhelming and baroquely dense mise en scène﻿: lengthy, offhandedly elaborately choreographed long-take sequence﻿s, overdubbed voices (and sounds) only half translated that are layered as if they are murmuring for your ears alone, and a way of using these two tendencies to bury the story movements deep within the historical/cultural/social context of his films.

Previous films by German, especially the two thundering masterpieces Ivan Lapshin (1984) and Khrustalyov (1998)﻿, practically required an upbringing in Soviet Russia to be familiar with the cultural touchstones which guide and give meaning to the director's cinema. While in a way Hard to Be a God makes for "easier" viewing because of its generalized, semi-allegorical false-history setting, nevertheless this recognizable but "new" world asks us to make sense of a seemingly equally deep social strata and cultural system. (Such cinematic world building is immensely impressive, all the more so in that much of it exists in such bizarre examples as the way feces, its taste and smell, are used as something like totems, currency, or maybe a drug-like food in the film.) Episodic but almost story-less—though distinctly focused on one "lord"/god whose advanced knowledge and bizarre placement in both the society and mythology of the planet condemn him to wander the world with little meaning, hope or joy—and seemingly intended to represent historical time as a immobile quagmire, Hard to Be a God is primarily a primordial immersion into humanity's filthy, desperate, debauched past, one which, the film suggests, the educated could (or can) do little to save from its entrenched gloom and must patiently wait out a slow evolution from early civilized barbarism. (It is a cinematic brother in many ways to Andrzej Zulawski's woe-begotten, dirt-ridden sci-fi vision of beginning human civilization anew, On the Silver Globe.) And with blood, mud, sausages, and entrails literally flung onto the lens as a cavalcade of freaks and miscreants leer at each other and out at us in servility, obsequiousness, and devious insinuations—Bahktin's carnival turned into a permanent and thus joyless state of society—the film is a tour (de force) indeed of barbarism incarnate.

And what about aesthetic barbarism, what about a real, historical decadence taken to such an extreme as to become barbaric? Hard to Be a God made a perfect, if exponentially exhausting double feature with a short feature by director Heinz Emigholz shown the day before the Russian opus, and which subsequently seared my senses: D'Annunzio's Cave (2005).

Part of the essential and eye-opening but far from extensive sidebar retrospective here on the great German filmmaker focusing on his recent documentary work, this aesthetically gross architectural exploration and objet d'art explores with obvious morbid fascination the hyper-baroque house of Italian poet Gabriel d'Annunzio. Leaving aside Emigholz's often serene analysis of larger architecture, he here goes ever deeper and with even more immediate a personal touch (signaled by very loose camerawork) into the claustrophobic, purple (in both senses of the word) interiors crammed beyond life with artifacts, art, bric-a-brac, sculptures, and an unnamable multitude of the over-collected and vainly displayed.

The house is a Welles-Losey-Ruiz nightmare of cramped and overlapping decorous ornamentation taken to an extreme. The soundtrack, always rich in Emigholz's work, features a similarly dense aggressiveness as the camera and indeed D'Annunzio's inescapable highfalutin grotesque decadence, readingtexts, poems and room descriptions in multiple computer voiceovers. It is a soundtrack rightly characterized by Olaf Möller﻿ as "musique concrète﻿," and makes the film even more dizzyingly perfumed by the repellent. Watch back to back with Hard to Be a God for an epic, unforgettably immersive experience of cinematic wretchedness, refined and degraded. 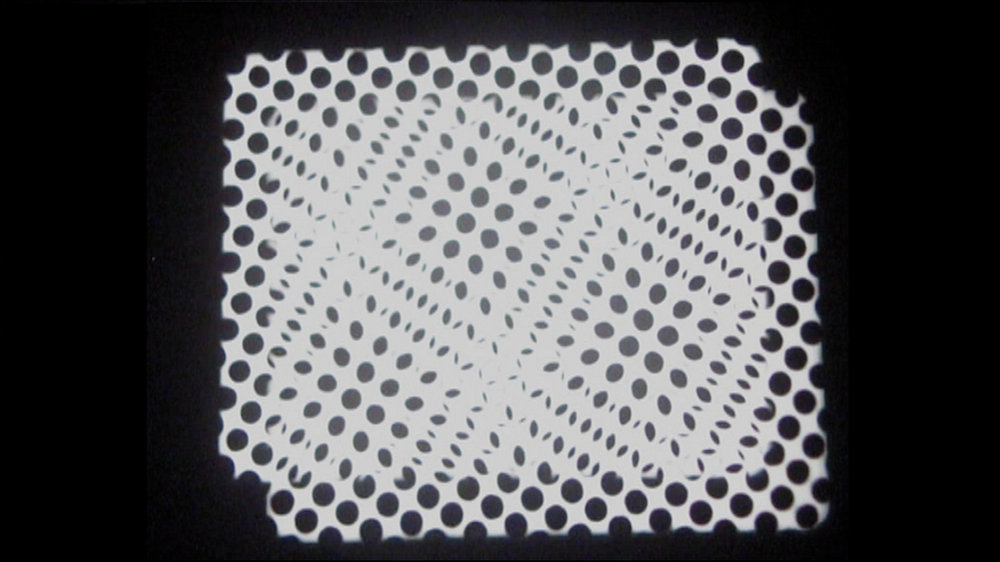 ﻿Bombardment: cacophony. The fragility of the "Silver" program of shorts I wrote about was aggressively resisted—though in a no less precarious way—by the final short film in the series, Richard Touhy's rhythmic sensory attack film, Dot Matrix. Last year at the New York Film Festival's Views from the Avant-Garde sidebar Touhly showed Screen Tone, a 16mm cameraless film made by layering dots and cut outs of dots on top of one another and photogramming them onto film stock. Dot Matrix cleverly actualizes this effect live by using two 16mm projectors each with a similar but subtly different print made of single layer of photogrammed dots, and then projecting each film on top of one another. The result—different every time; apparently Touhy much preferred the second screening of the work at the festival—is a visual percolating cacophony of black and white optical effects dynamically creating surprisingly and evolving tremors, animations, and shapes from these basic elements. (It should be noted the dots Touhy plays with are the kind manga and newspaper printing used to use, so in effect Dot Matrix animates the immobile particulars that make up still images into an agitated cinema of constant movement.) The sound is equally arresting, created along with the visuals, by "exposing" the sound element on the film stock to the dotted light, resulting in a tick-and-thacking analog glitch-like techno score that rapidly ripples with blunt prickles through the show.

Such cacophony turned out to be the guiding idea of "Vertical Cinema," the most ambitious and promising show in the entirety of the Rotterdam festival, but which ultimately turned out to be underwhelmingly curated. An anthology of ten shorts commissioned to be shown in 35mm CinemaScope projected vertically in a church, to my and several others' surprise and disappointment, many of the shorts were confusingly created digitally and then transferred to film, most of the soundtracks were of an overwhelming and uniformly drone 'n techno style, and, most shocking of all, most of the short films did little to engage with or challenge the wild "new" aspect ratio of the projection. Yet simply the readjustment necessary to watch this program was something tremendous to experience, an exhausting craning upward at the skyscraper-like white tower of screen which asked for an up-and-down scanning of the image rather than the now-ingrained, Strangers on a Train-esque left-and-write reading.

As I should have expected, Chrome, a color film produced through ancient techniques from black and white emulsion by Dutch filmmaker Esther Urlus, who has three lovely short hand-processed films at the festival (including Konrad & Kurfurst) stood out in the program as a subtly vertical dance and waterfall of dotted and splotched colors. Makino Takashi, who last year made the fantastic 2012, co-directed with "Telcosystems" the best film in the show, the simultaneously macro and microscopic Deborbit, a madly hectic and detailed animation that could equally represent a space travel epic or a biological plunge. (Crucially, Deorbit's success was also not hampered by its frenetic drum-based percussion accompaniment that was one of the few soundtracks in the show that did not compete with or flatten the effect of its accompanying visuals. Whether it enhanced the experience I'm not too sure.) It was a film so visually active I find it too difficult to describe or characterize, and ever after at the festival I've been looking for Makino to ask him just what the heck I was actually watching.

Most of the "Vertical" shorts felt structureless and, along with their music, suggested unusually inventive background visuals to a techno show. Notable exceptions were the lone photographic (!) short, by Johann Lurf, a circling survey of a lens flare bouncing off a large glass pyramid building, and Tina Frank's Colterrain, which, though created synthetically in the audio-image creator Synchronator, achieved a hypnotic vertical flow that fully embraced the project spatially, rhythmically and phenomenologically in a way few of the other shorts did, creating a throbbing, waxing and waning river of color bands that would have been a terrific and poignant way to end the program if it had closed the selection as Chrome had introduced it. 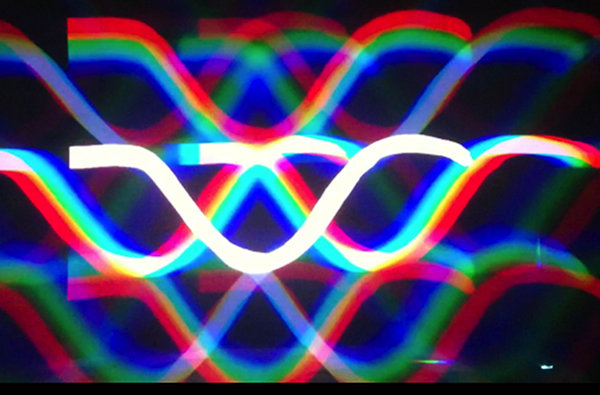 I leave the shortest, most vibrant, and most fun bombardment for last: Jodie Mack's stroboscopic animation Let Your Light Shine. This pocket-sized refracting feast of light was the culminating ("second encore") short in the far and away best show at the 2014 festival, which featured four animated shorts bookending Mack's rock opera short feature, Dusty Stacks of Mom: The Pop Project, a full program joyfully taking the structure of a music concert. More on Mack's program later, but Let Your Line Shine's graphically spare animation of white lines and on a black background, when combined with prismatic glasses, created a three-plane, three-dimensional spectacular as we watched the screen's animation, the rainbowing refraction on our glasses' lens themselves, and then the true "3D" effect created in the space between the screen and our goggled vision. (The theater's "Exit" sign was incidentally also rendered as an unexpected stroboscopic installation during the film's "performance.") Calling back in tone and style to early 70s experimental computer cinema, like Lillian Schwartz's Bell Laboratories 3D masterpiece UFOs, and in form to 1930s animation like that of Oskar Fischinger﻿ (from whom its soundtrack creation is also inspired), the film with a giddy, burbling energy goes back even further, literally creates a cinema of attractions: the entire theater space itself is transformed from simple flat screen into a beaming, bouncing animated show of light.﻿