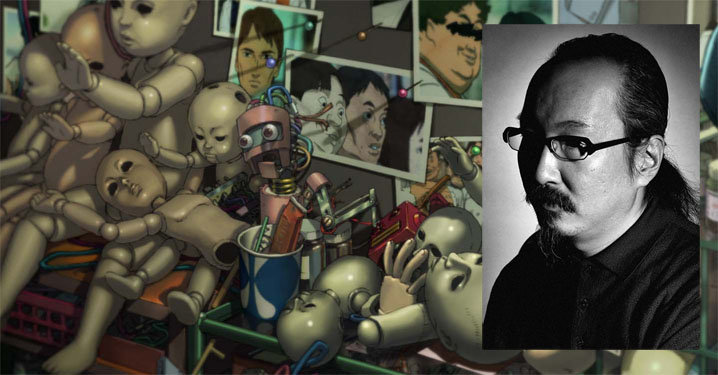 The news that groundbreaking anime director Satoshi Kon has passed away at the age of 47 was initially met with skepticism, but many are now sadly pointing to confirmation from Jim Vowles, a member of the Otakorp Board of Directors for the Otakon convention.

Tom Mes interviewed Satoshi Kon for Midnight Eye in 2001. Of his 1997 debut, Mes wrote, "With its dazzling storytelling technique and strikingly mature subject matter, Perfect Blue finally convinced a lot of people that animation might be more than just a children's medium." Millennium Actress followed four years later: "Far from falling victim to the dreaded sophomore slump, Kon has created a more than worthy successor. His second film is another example of his virtuoso storytelling technique as well as an homage to Japanese cinema history."

"2003's Tokyo Godfathers was his lone linear narrative," writes IFC's Alison Willmore, "though it too was a complicated story of three homeless people with loaded pasts who discover a baby in the trash on Christmas Eve. These are grown-up features all, ones that use the visual freedom of their medium to inventive, sometimes astonishing (particularly in Paprika) effect."

As many have argued, Christopher Nolan's Inception owes at least a little something to Paprika. When it appeared in 2006, Acquarello wrote, "Based on the futuristic novel by seminal science fiction author Yasutaka Tsutsui, Paprika is a bold, provocative, mind-bending, and fiercely intelligent exposition into the nature of terrorism, the demystification of the subconscious, and the psychology of fetishism and objectification." At one point, a "team soon realizes that their quest is also a race against time as the rapidly fusing dreams spiral uncontrollably into a collective delusion that threatens to supplant the 'real' reality with its fantastic and nightmarish incarnation."

"Satoshi Kon also tried dabbling in TV a bit with the short run series Paranoia Agent [2004] which played to some of the themes he's used in movies in the past," notes Chris Beveridge at Mania.com.

Kon had been working on a new film, The Dream Machine, which he told Anime News Network a bit about in an interview in 2008: "On the surface, it's going to be a fantasy-adventure targeted at younger audiences. However, it will also be a film that people who have seen our films up to this point will be able to enjoy. So it will be an adventure that even older audiences can appreciate. There will be no human characters in the film; only robots. It'll be like a 'road movie' for robots."

Updates: An excellent tip from Jason Morehead: Grady Hendrix's overview of the work for the New York Sun in 2008. Among the points argued: "Paranoia Agent, a 13-episode TV series, stands next to David Lynch's Twin Peaks and Lars Von Trier's The Kingdom as one of the most sustained and ambitious artistic visions ever broadcast on television. A repository for story ideas trapped in Mr Kon's head after five laborious years of feature filmmaking, Paranoia Agent is set in a modern-day Tokyo that's observed with the cool detachment of a JG Ballard novel."

Ioncinema posts an interview from 2007.

Updates, 8/25: "In the past few months," writes Chris MaGee at Toronto J-Film Pow-Wow, "we have seen the deaths of some of the most influential, both in front of the camera and behind — actor Kei Sato, director Katsumi Nishikawa, and art directors Takeo Kimura and Kimihiko Nakamura — all men who shaped the history of Japanese film in their unique ways. Their losses were sad, but all of them lived long and eventful lives, passing away in their 80s and 90s. Today, though, the news broke of the passing of a man who has shaped not only Japanese animation, but also film around the world, and the worst part is that he left us so tragically early.... All fans of Japanese film, anime, animation worldwide and science fiction at large will now be left with only speculation as to the legacy that Kon might have left had he lived into old age."

"Kon was a manga artist who worked behind the scenes in anime before creating an international sensation with his debut directorial feature, 1998's Perfect Blue, which blends Hitchcockian psychodrama with bright bubblegum colors and surreal imagery." Tasha Robinson at the AV Club: "It follows a pop-singer-turned-actress dealing with a possibly supernatural stalker and an emotional breakdown that makes her doubt her own senses, which gave Kon a chance to touch on what would become his pet theme: the intersections between fantasy and reality, and the way art and emotion blur the lines between them. His follow-up, 2001's Millennium Actress (which Scott Tobias dissected at length last year for New Cult Canon) went deeper into those ideas, with the story of an aged actress looking back on her life as if it were a series of genre pictures, and gladly falling into their bright fantasies."

Listening (46'04"). In 2008, Brendon Bouzard, John Lichman and Keith Uhlich discussed Kon and his work at the House Next Door.

"Every one of Kon's films is an increasingly ambitious technical and storytelling challenge," writes Chris Stangl. "Satoshi Kon made films expansive of imagination and personal of preoccupation, pushed the boundaries of his medium and tried to break, dodge, and stand out from certain clichés, prejudices and lazy habits of the Japanese animation industry. It is that ambition to blow an audience's mind with sights they have not seen and will not forget that separates Kon's work, and, one hopes, will be the inspirational legacy of his films. As I always feel lacking during such moments, I direct interested persons to this appreciation and 2003 interview by Brian Camp. The discussion mainly concerns Tokyo Godfathers, but manages to cover several key and under-examined aspects of Kon's films, such as the realer-than-truth documentary qualities possible in animation, and his dedication to visual depiction of Japanese characters that look Japanese."

"Kon was the real deal and his films were all wonderful and strange," blogs Simon Abrams for the New York Press. "I'm saddened by the prospect of never being able to see a new Kon movie on the big screen again, because even if the Madhouse guys do finish The Dream Machine, Kon's latest project, post-humously, I suspect something will be missing. Kon was a very hands-on artist (he originally worked as a manga artist and apprenticed under Akira's Katsuhiro Otomo) and all of his work show a distinct personality at work. I don't think you can duplicate or pinch-hit for that kind of talent." And he points to his 2008 interview with Kon for Twitch.

Dave Kehr reminds us of his 2007 profile for the New York Times, in which Kon tells him, "Animation is supposed to be like a dream, pretty and nice. When you see a Disney cartoon, you're in a dream world of sweet animals and pretty flowers. The dream world in Paprika is quite the opposite — frightening and horrible, a surprising notion coming from a cartoon."

"[T]here are not too many online scholarly studies of Kon's work yet," notes Catherine Grant. "For now, then," she offers quite a nice collection of "links to the very worthwhile resources and discussions that have been made freely accessible."

"[A]part from merging the lines between the real and the fantasy and exuding the sense of magic realism throughout, it is also the subjective reality reflected through his storytelling that arrests you," argues Nitesh Rohit.

Thanks to Tyson Kubota for noting in the comments below that Anime News Network has posted statements from Kon's widow, Kyōko Kon and Madhouse as well as Kon's own final message: "With feelings of gratitude for all that is good in this world, I put down my pen. Well, I'll be leaving now. Satoshi Kon."

Updates, 8/26: "With Hayao Miyazaki (Spirited Away, My Neighbour Totoro), Isao Takahata (Grave of the Fireflies, Only Yesterday) and Mamoru Oshii (Ghost in the Shell) he revolutionised the medium not so much in form but in emotional depth and artistic subtlety. Animation had never been more serious or been taken more seriously." For Stephen Russell-Gebbett, Kon's greatest achievement was Paranoia Agent: "When people can no longer face their troubles a boy with a demented smile assaults them with a golden bat. When he swings his bat with vicious force he offers an escape — to a hospital bed and to a place outside of the system. Is he real? He is a hologram that no-one gets close enough to pass their hand through who becomes an agent of paranoia akin to a chemical agent.... Satoshi Kon’s work was part of a trend in Japanese TV and film — examples of which were Kiyoshi Kurosawa's Pulse and anime series Serial Experiments Lain — depicting  a generation of people with little stake in life, eaten from within and attacked from without. These shows were characterised by nihilism but a nihilism mollified by empathy."

"While Mr Kon's film work incorporated many familiar anime elements — pixielike female characters, sensitive robots, futuristic cityscapes and an anxious fascination with the creative and destructive power of technology — it was also informed by literary, artistic and cinematic traditions far beyond contemporary Japanese popular culture." In the NYT, AO Scott also talks with Susan J Napier, author of several books on anime, who links Kon with Miyazaki and novelist Kenzaburo Oe: "Mr Kon, she said, combined their characteristic social and ethical concerns — including sympathy for outsiders and a belief in the redemptive power of love — with a mischievous and wildly inventive visual style."

"It became clear with Millennium Actress and Tokyo Godfathers that he was doing something very different from his peers," blogs Phelim O'Neill for the Guardian. "The first, which tells the story of a popular film star who withdraws from public life, proved he was a director-aficionado with a deep knowledge and even deeper love of cinema. Chiyoko's narrative is interspersed with memories/clips from her films that blur together — telling not only her own history but also a potted history of Japanese cinema. The actress was based on Setsuko Hara and Hideko Takamine, muses of the great directors Yasujirō Ozu and Mikio Naruse respectively. Millennium Actress also touched on Kaiju Eiga, the Japanese monster-movie genre. There aren't any other animated films I can think of that assimilate such a range of references."

The Guardian's more or less official obituary is by Andrew Osmond: "Kon thought that people lived in multiple realities, such as those of television, the internet and the realm of memory. 'The human brain is mysterious; we can't share the time axis in our memory with other people,' he said. 'I'm interested in trying to visualise those nonlinear ways of thinking.'"

"The late Satoshi Kon's family has posted a heartbreaking final message from the anime director on his website," notes IFC's Alison Willmore. "Blogger Makiko Itoh has translated the document," and you can read it here. Fair warning, though. As Alison adds, "Get out some Kleenex first."