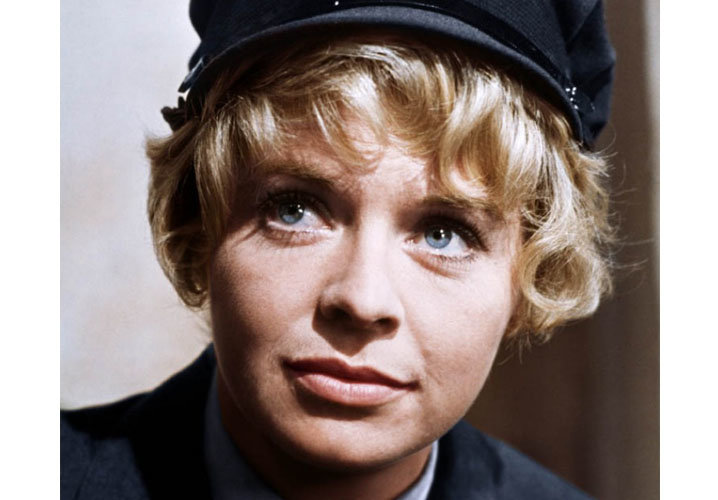 "Susannah York, the British actress whose gamine looks and demure persona made her an icon of the swinging 60s, has died at the age of 72," reports Ben Quinn in the Guardian. "She passed away yesterday following a long battle with bone marrow cancer. York won acclaim for her roles in They Shoot Horses, Don't They? — the 1969 film role for which she was nominated for an Oscar and Golden Globe — as well as A Man For All Seasons in 1966 and as the feisty section officer who took on Kenneth More in the stirring second world war epic Battle of Britain in 1969."

"But her most memorable performance was surely as Childie, the young lesbian in Robert Aldrich's film adaptation of Frank Marcus's hit play The Killing of Sister George (1969)," argues the Telegraph. "The film, which is now viewed by many as one of Aldridge's best, encountered numerous difficulties during and after the production, partly due to behind-the-scenes bitching between Beryl Reid and Coral Browne — Susannah York's alcoholic co-stars, and rivals (in the film) for her affection. It also ran into trouble on account of its most notorious sequence, an extended scene of lesbian lovemaking between Childie and Mercy Croft (Coral Browne) that was so explicit that it caused the film to be X-rated and banned in several locations. (It also caused Aldrich's longtime collaborator Frank De Vol to quit in disgust). Susannah York was extremely uncomfortable playing the scene, but it carried a strong erotic charge, and Susannah York's performance in the role of Childie demonstrated her versatility as an actress, allowing her shed her typecast image as the demure English Rose."

"As a hormonally inflamed adolescent during the 1960s," recalls Joe Leydon, "I harbored considerable lust in my heart (and other vital organs) for British actress Susannah York as she appeared as a sprightly, sexy and altogether scrumptious presence in movies as diverse as Tom Jones, Sebastian, Duffy — and Kaleidoscope, the cheeky 1966 comic-thriller in which she played the vivacious romantic interest for an audacious gambler (Warren Beatty) who breaks into a card-printing plant to mark the cards and thereby ensure his winning streak at various European casinos. Well into the 70s, as she shared a bubble bath with Roger Moore in Gold (1974), became Elliott Gould's partner in crime in The Silent Partner (1978), and ultimately served as the hypotenuse of a romantic triangle with Michael Caine and Elizabeth Taylor in X, Y and Z (1972), she continued to impress as a slow-simmering hottie, sassy and sensual but, when she needed to be, endearingly vulnerable."

Foremost among Glenn Kenny's favorite performances is York's Rachel Fielding in Jerzy Skolimowski's The Shout (1978), "wherein, for my then-18-year-old money, as it were, she really set the screen ablaze… A very gutsy performer whose heyday came during an era when being a gutsy performer was kind of taken for granted."

"York's mix of (apparent) sexual naiveté and sexual eagerness can be attested in [Tony Richardson's] Tom Jones [1963], in which she incarnates the idealized blonde, blue-eyed English Rose — one who looks as seductive as she's lovely, and who quite likely could have taught a lesson or two in sexual 'depravity' to the more experienced Joyce Redman." Andre Soares at the Alt Film Guide: "In John Huston's Freud (1962), one of the director's most curious and perhaps his most underrated effort, York plays one of Dr Freud's patients, a deceptively demure but actually sexually repressed young woman with a father fixation. Now, Huston probably didn't find York an 'adorable creature,' as the short-tempered actress punched the director after he ridiculed Montgomery Clift's failing eyesight. (In 1999, York would tell the Sunday Mirror: 'I have a very quick, strong temper. I don't smash up things, I just go for people. And I never know when it's going to happen to me. I can turn in a moment. The thing about my temper is that it takes me totally by surprise so, of course, it takes everyone else by surprise too.')"

Back in August, David William Upton revisited this pivotal scene in They Shoot Horses, Don't They? "After Sailor (Red Buttons), a victim of a second ten-minute sprint around the dancehall, collapses stiffly onto her dress, Alice cracks. Tainted, she thinks, by death, she flees to cleanse herself. There is something about me, evidently, that has a mind that responds so much more heavily to physical acting — Susannah York barely utters a word in this scene, yet it was, for me, the most arresting, stunning scene of a film that is hardly short on the despair… This isn't just Alice's breakdown — it acts as the film's, the awaited implosion of physical and mental torture that all the characters are enduring."

"In Robert Altman's film Images she plays a woman again on the verge of madness," writes David Sillito for the BBC, "and while she won the best actress award at the Cannes Film Festival, it was not an experience that won praise from every critic at the time. But the fact that she is better known in the 70s for being Superman's mum, the calm wife of Marlon Brando does her acting skills or reputation no justice."

Updates: From the Guardian's theater critic, Michael Billington: "[E]ven when her movie career waned, she worked ceaselessly in theatre, often appearing in pioneering fringe productions. It was typical of her that, although diagnosed with cancer late in 2010, she refused chemotherapy and fulfilled a contractual obligation to do a tour of Ronald Harwood's Quartet." And on Altman's Images: "Here she played a possibly schizophrenic author of children's books wrestling with her sexual identity. She put something of herself into the character, responded excellently to Altman's sympathetic direction and, although some found the film mystifying, it retains interest, as [David] Thomson wrote, 'because of the actress's resolute seriousness.'" Then: "I have rarely known anyone less bothered by fame and celebrity. If she used her star-power, it was purely to promote causes in which she believed. One was that of Mordechai Vanunu, the Israeli dissident who was imprisoned in 1986 for revealing his country's nuclear weapons programme. In 1984 she also produced, at the Apollo, Victoria, The Big One: A Variety Show for Peace, which featured U2 and the premiere of a Harold Pinter sketch, Precisely, and which was driven by her anti-nuclear beliefs. Somehow she also found time to write fiction, including two popular children's books, In Search of Unicorns (1973) and Lark's Castle (1975)… But perhaps York's greatest achievement was to escape the pigeonholing that is the curse of her profession and to overcome the perception of her as the flaxen-haired beauty of 1960s British movies. In her richly fulfilled later career, she proved that she was a real actor of extraordinary emotional range, not just a movie star."

Also in the Guardian, Ben Walters comments on a series of clips.

Join the discussion here. And for news and tips throughout the day every day, follow The Daily Notebook on Twitter and/or the RSS feed.