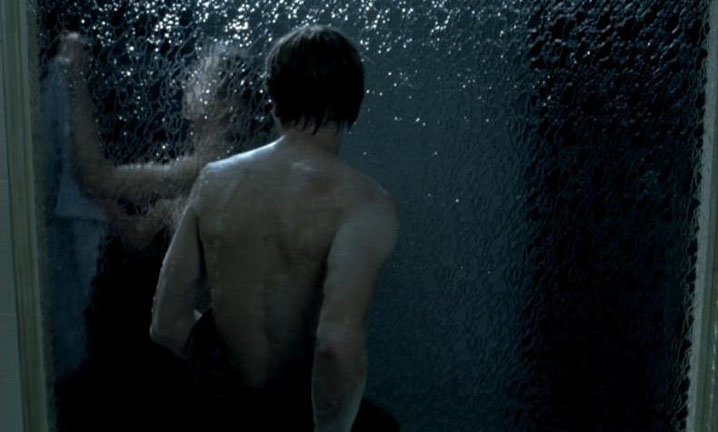 "One of the finest literary adaptations ever made, Chantal Akerman's La Captive (2000) distills La Prisonnière, the fifth volume of Marcel Proust's sprawling In Search of Lost Time, to a spare, inventive rumination on the author's key themes: jealousy and possession." Melissa Anderson for Artforum: "Akerman, who co-wrote La Captive with Eric de Kuyper, dispenses with the novel's belle epoque time frame, setting her film in present-day Paris. Marcel and Albertine, Proust's mismatched lovers, become Simon (Stanislas Merhar) and Ariane (Sylvie Testud), who live together in Simon's enormous apartment. A neurasthenic writer, Simon is feverishly jealous, first seen studying Super 8 footage of Ariane playing on the beach with a group of women — a time he refers to as her 'other life,' when her romantic relationships were exclusively same-sex."

For the New Yorker's Richard Brody, Akerman's "resplendent images reference masterworks by Hitchcock and Godard, and canny, rectilinear framings of scenes shot in cars turn the city, as seen through rear windows, into rear-screen projections, holding natural imperatives and social artifices — and inner lives and outer circumstances — in exquisite and ambiguous balance."

"Akerman's filmic command of the obsessive movement in La Captive is spectacular," wrote Ivone Margulies in an essay for Rouge in 2006, "La Chambre Akerman: The Captive as Creator."

This may be "the most Bressonian of Chantal Akerman's minimalist and dedramatized cinema," suggested Acquarello in 2004, "most notably, in the bookend structure and psychological deconstruction of A Gentle Woman... Akerman distills the lush texturality and baroque elements of Proust to create a spare and essential portrait that nevertheless retains the thematic density and emotional ambiguity of the psychological novel."

Nick Davis (from whom the above image has been unceremoniously ripped), last summer: "It's a kick on a DVD supplement to hear this under-appreciated Belgian master compare her film La Captive... to the widely rejected Eyes Wide Shut, and not principally because both movies rework early 20th-century literary conceits into the social and sexual idioms of nearly 100 years later. This La Captive certainly does, with just as much affinity for ironic anachronism as Kubrick betrays, and with a similar, powerful emphasis on the ways in which even shallow, diminished men control women, imagining they have absorbed them and known them fully."

Festivals in Edinburgh, Los Angeles and San Francisco have wrapped, but the New York Asian Film Festival rolls on (as do a good handful of other events in the City). Il Cinema Ritrovato is on in Bologna through Saturday and David Bordwell has posted an entry on the series of early films by John Ford: "all his surviving silents, plus a selection of rarely-seen talkies." Dan Sallitt has been posting reviews of Mikio Naruse rarities. Reverse Shot's second podcast ever is now available. PopMatters' epic Hitchcock series is now complete. Catherine Grant has posted a massive roundup on Michael Haneke and Mike Everleth has your "Underground Film Links" for the week.