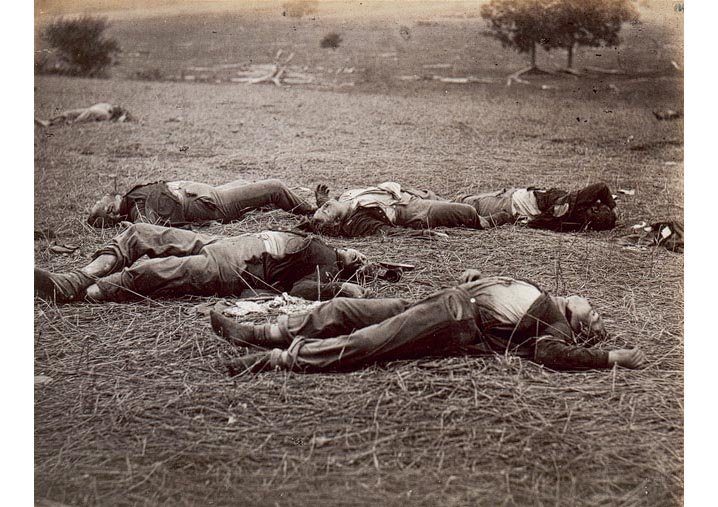 "When South Carolina artillerymen opened fire on a small band of federal troops garrisoned in Ft Sumter exactly 150 years ago," writes Scott Collins in the Los Angeles Times, "the American Civil War officially began. Now Hollywood is getting ready to fight the nation's bloodiest conflict all over again with a passel of new sesquicentennial-ready film and TV projects from some of the biggest names in the entertainment industry, including directors Steven Spielberg, Ridley Scott and Robert Redford."

Spielberg is currently set to begin shooting Lincoln in the fall, with Daniel Day-Lewis in the title role; Scott and his brother Tony have created CGI-enhanced reenactments for the History Channel's two-hour documentary Gettysburg, airing next month; and Redford's The Conspirator, "with Robin Wright as Mary Surratt, the boarding house proprietor who was accused of aiding John Wilkes Booth in his plot to kill Abraham Lincoln in April 1865," opens on Friday.

You can't write a piece on cinema's treatment of the Civil War without consulting Ken Burns, of course. Last week, PBS re-ran his and his brother Ric's 1990 ten-hour documentary The Civil War, and he tells Collins that this war is still "the most important event in American history. Everything that came before the Civil War led up to it; everything since has been, in many ways, a direct consequence of it."

The New York Times has turned to Burns as well, for a piece in which he elaborates on that argument. Today, he writes, "we ask again whether in our supposedly post-racial, globalized, 21st-century world those now seemingly distant battles of the mid-19th century still have any relevance. But it is clear that the further we get from those four horrible years in our national existence — when, paradoxically, in order to become one we tore ourselves in two — the more central and defining that war becomes. In our less civil society of this moment we are reminded of the full consequences of our failure to compromise in that moment." As for that landmark doc, "It was an emotional archaeology we were all after, less concerned with troop movements than with trying to represent the full fury of that war; we were attracted to its psychological disturbances and conflicted personalities, its persistent dissonance as well as its inspirational moments. We wanted to tell a more accurate story of African-Americans, not as the passive bystanders of conventional wisdom, but as active soldiers in an intensely personal drama of self-liberation. We wished to tell bottom-up stories of so-called ordinary soldiers, North as well as South, to note women's changing roles, to understand the Radical Republicans in Congress, to revel in the inconvenient truths of nearly every aspect of the Civil War."

Back to Collins: "'Hollywood has a frankly terrible history with the Civil War,' said David W Blight, a Yale historian currently on a fellowship at the Huntington Library in Pasadena, whose 2001 book Race and Reunion: The Civil War in American Memory exploded many of the myths associated with the postwar Reconstruction period. A key problem, Blight noted, was the 'Lost Cause' mythology, which was promoted by Southern writers in the late 19th and early 20th centuries, and depicted the Confederacy as a noble and idyllic civilization vanquished by impossible odds. In some viewers' minds, the notion of sumptuous plantations filled with contented, wisecracking slaves still persists. 'Gone With the Wind laid that down in cinematic terms, so that you can probably never pull its roots out,' Blight said."

Also in the LAT, Susan King revisits "four memorable movies and one TV drama about the bloody conflict that redefined the nation": Buster Keaton's The General (1927), John Huston's The Red Badge of Courage (1951), John Ford's The Horse Soldiers (1959), Don Siegel's The Beguiled (1971) and George C Scott's The Andersonville Trial (1970).

Updates: The New Yorker's Richard Brody has caught Lincoln fever today, too, mentioning in a brief roundup John Ford's The Prisoner of Shark Island (1936) and "via Studio 360, in a surprising document of the director Steven Soderbergh's cultural consumption over the past year, where he mentions watching The Tall Target, Anthony Mann's taut and fascinating 1951 film noir about a thwarted conspiracy to kill Lincoln in 1860. (I wrote about the film when it played at Film Forum a couple of years ago.) Mann's film reflects the political paranoia, the ambient menace of violence, the incommensurable divisions that wracked the republic on the eve of the Civil War — and Mann's direction audaciously reflects the inner state of fear and tension. In effect, it's a nuclear-age Cold War thriller done up in top hats; it's available on DVD from Warner Archive."

Update, 4/14: "This year marks the 75th anniversary of the publication of Gone With the Wind, Margaret Mitchell's novel about Civil War-era Atlanta and the source of one of Hollywood most legendary cinematic enterprises," notes ST VanAirsdale at Movieline. "And because nothing says 'party' like an epic tale of 19th-century privilege, slavery, violence, privation, defeat and heartbreak, the 'Windy' subculture is getting together to celebrate. According to the NYT, scores of devoted 'Windies' are preparing to converge on Atlanta for a real barnburner — err, megabash, or something…" 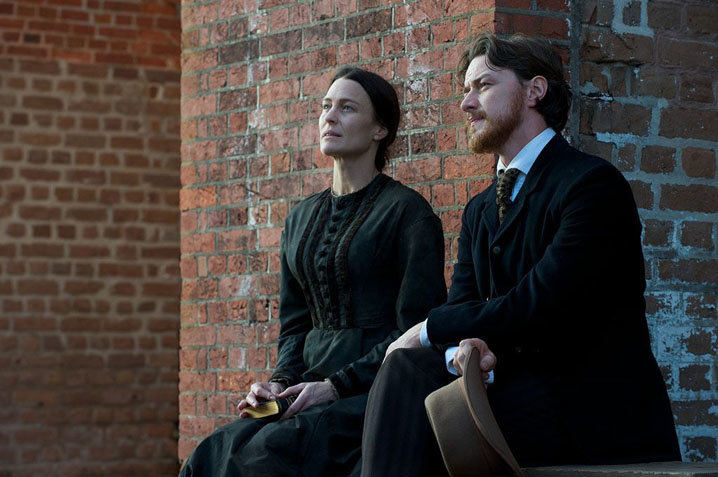 To The Conspirator and, for starters, Anthony Lane's review in the New Yorker: "It is almost a century since DW Griffith, in the course of The Birth of a Nation (1915), dramatized the same assassination, which in turn had taken place only fifty years before. In The Conspirator, John Wilkes Booth is played by someone who looks like Borat, but Griffith's Booth was played by Raoul Walsh, who went on to become a major director, making movies up to the 1960s. Such are the seven-league leaps with which cinema connects us to the past. The director of The Conspirator, Robert Redford, and his screenwriter, James D Solomon, spend less than half an hour on the night of the killing itself, but they use the time briskly; whether or not by design, they follow Griffith's original procedure, right down to the closeup of Booth's pistol, outside the theatre box, and his daring jump to the stage once the deed is done. The remainder of the new film is centered in the courtroom, where Surratt and some of her fellow-defendants were tried, and where she was represented by Frederick Aiken (James McAvoy), a young attorney on his first case… [O]ne wishes that the director had found the grace to touch upon, rather than belabor, the parallels between the conspirators of 1865 and the present-day inmates of Guantánamo: the humiliating hoods that they are forced to wear, and the adjudicating presence of a military tribunal instead of a civilian jury. Now and then, the dourness takes a break, and I am always a sucker for a good, old-fashioned showdown in a courtroom, especially when the wily prosecutor is played by Danny Huston, who seems twice as mean when he's trying to be nice." All in all, though, "the air is thick with noble intentions."

Updates, 4/13: "Square-jawed and knotty-fingered, with the look of having been dragged around by life, Wright fits her part and period," writes Nick Pinkerton in the Voice, "but McAvoy's Aiken is the one who carries, and stumbles with, the film. Aiken is chosen to represent Surratt in part for his wartime credentials — he's introduced bleeding on a History Channel battlefield — but nothing in McAvoy's pushover peevishness suggests knowledge of command or the burdensome memory of war. This would matter little if there was any transference from Surratt, if Aiken absorbed her toughness through their partnership, but such gravitas never arrives. The story is one of idealistic youth speaking truth to power, with Kevin Kline's Secretary of War Edwin Stanton the archetypal cynical insider, but after Aiken's closing argument, you're mostly stirred to watch Danny Huston's prosecuting attorney break him."

"Redford obviously wants to make the enraged, corrective movie of his glory days," writes Joshua Rothkopf in Time Out New York. "The effort is admirable, even if his whole team isn't on the same page."

Eric Kohn at indieWIRE: "It's possible that the only hope for rejuvenating Lincoln on film will come with the upcoming release of Abraham Lincoln: Vampire Hunter, because Redford's treatment simply sucks the life out of the material."

Updates, 4/14: From Steven Zeitchik's backgrounder in the Los Angeles Times: "'Many people have been making the Guantanamo comparisons, which is really odd to me,' said screenwriter James Solomon, referring to the reaction after The Conspirator screened for preview audiences and critics around the country. 'It was 1993 when I started this. George W Bush wasn't even the governor of Texas yet. Then again, the real-world circumstances provide a great understanding of the context. People can now bring their own awareness of the chaos, the fear, the anxiety that was plaguing the country at that time.'"

For Jonathan Kiefer at the Faster Times, "there's something unsatisfying in how the movie hurries through its pretext, as if too dignified to dwell on the infamous event itself, in order to make a nest in the courtroom and lecture the audience on what to think about what happened thereafter."

"Who even makes quiet, methodical pictures about historical events anymore?" wonders Movieline's Stephanie Zacharek. "The Conspirator does feel like Redford's bid for elder-statesman, serious-filmmaker status, and maybe that bid is a little naked. But so what? For every awkward misstep the movie takes — and for every static courtroom scene that might tread dangerously close to putting you to sleep — Redford's earnestness at least shows that he thinks about what it means to be a decent citizen, and that he understands that having a sense of where we've been as a nation might have some bearing on where we're headed."

"Wright does a game job of evincing Mary's moral and spiritual panic," writes Paul Schrodt in Slant. "How does she prove her innocence without giving her own son up for execution? But if she never quite rises to the challenge of, say, Sean Penn's moral ambiguity in Dead Man Walking, it's because Redford is less interested in Mary as a real, living person than as an abstraction of US history."

"From the hurried opening that details the events on the night of the assassination to the arguments and counter-arguments of the courtroom procedural, The Conspirator rarely welcomes the viewer into its activities," finds Marjorie Baumgarten in the Austin Chronicle.

Updates, 4/15: Slate's Dana Stevens: "It's easy to imagine the bulleted list of questions to be handed out afterwards for high-school civics students to ponder: What is a writ of habeas corpus? But once you accustom yourself to this film's unhurried rhythm and old-fashioned Hollywood stolidity, The Conspirator is not without its pleasures."