"The cinema event of a lifetime," promises that trailer up there. No doubt. It's an event we've been banging the drum for the past couple of weeks — see, first and foremost, Adrian Curry's marvelous collection of posters.

Today and tomorrow, and then again next Saturday and Sunday, the San Francisco Silent Film Festival will present the latest restoration of Abel Gance's epic Napoleon (1927) at the grand Paramount Theater in Oakland. Historian Kevin Brownlow, who's devoted much of his life to reconstructing the original version, has overseen this newest 330-minute version. The original original is believed to have run for nine hours when it first screened in Paris over two days before it was cut down to varying lengths for domestic and international distribution. As Manohla Dargis notes in her must-read piece for the New York Times, MGM cut one of the shortest for the US: 70 minutes, "a butchering that seemed to encourage bad reviews":

By the time Gance, who died in 1981 at 92, started on Napoleon he had already been anointed a cinematic pioneer, primarily for his touching 1919 romance J'Accuse, set against World War I, and his frenzied 1922 tragedy La Roue, about desperate desire in a poor railroad family. Both were successes and inspired feverish acclaim. The Cubist painter and future filmmaker Fernand Léger said that with La Roue Gance had "elevated the art of film to the plane of the plastic arts." Jean Cocteau declared that "there is cinema before and after La Roue as there is painting before and after Picasso." Gance answered this praise with the even more ambitious Napoleon, calling it "the greatest film of modern times."

Gance envisioned making six films about Napoleon. He directed (if revisited) just the one, and it ends in 1796 with the 26-year-old Napoleon (Albert Dieudonné) leading the French Army into Italy for what became known as the First Italian Campaign. What Gance was after wasn't a melodramatic tale, say, about Napoleon and his lady love, Josephine — "I have made the minimum concession to the romantic" — but something more psychologically evolved. What interested him was History, capital H. Napoleon, he said, was a "paroxysm in his time just as his time was a paroxysm of history." It's hard not to think Gance was also talking about himself.

Criterion presents a brief but gorgeous slide show to accompany its brief but informative interview with Brownlow: "There has never been a film involving so much camera experimentation: footage exists showing cameras mounted on sleds, on cables, on overhead pendulums, and even on the back of a horse. Gance tended to use multiple cameras on his films. On Napoleon, he had dozens. He had enough cameras that he could produce enough negatives to make a completely different version."

Napoleon acquired its legendary status on this side of the Atlantic three decades ago, in January 1981, when an earlier, four-hour restoration by Brownlow was screened in New York under the aegis of Francis Ford Coppola. Never overlook Coppola's role as film catalyst and patron. Around this time he was also instrumental in getting Godard's Sauve qui peut and Kurosawa's  Kagemusha made and distributed. Even if he'd never directed any films, Coppola would deserve an honored place in movie history. This is worth bearing in mind, as it's been reported that he is at least in part responsible for this fuller Brownlow restoration taking so long to be shown in the United States. The 1981 version has music by Carmine Coppola, Francis's father. The score of the longer one, by Carl Davis, is generally considered superior. Michael Corleone isn't the only son overly protective of his father's legacy. 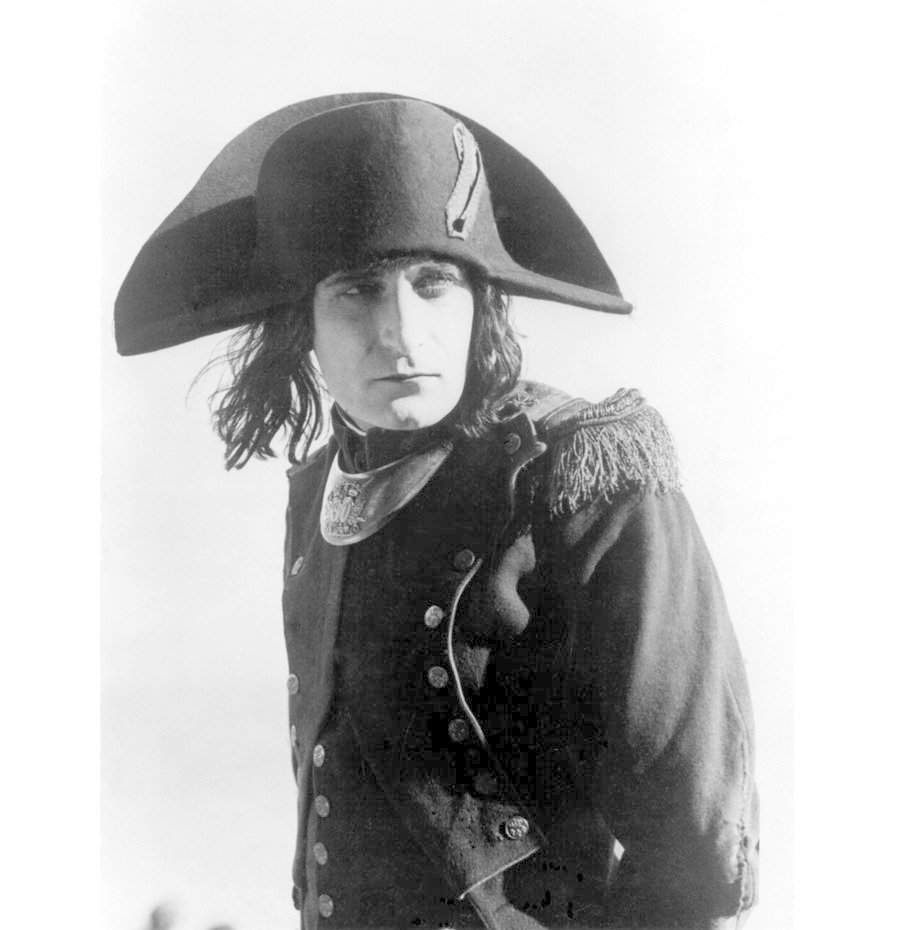 Feeney saw Napoleon at its return engagement at Radio City Music Hall ten months after its premiere, and I can't help but quote another big swath from his piece:

It's at once the greatest novel Victor Hugo never photographed and absolute "visual Berlioz" (as the Globe's Richard Buell wrote when it was shown at what is now the Citi Center's Wang Theatre, in November 1981). Part of the wonder of Napoleon is how something so shamelessly, magniloquently 19th century in content and sensibility should take the form of state-of-the-art 20th-century technology (as it then was).

When people talk about how technically innovative Napoleon was they invariably mean its use of Polyvision. That was Gance's term for a process whereby the screen becomes a triptych at the movie's climax, when Bonaparte leads his army into Italy. What's even more startling — it's flat-out overwhelming — is when Gance superimposes on a close-up of Napoleon in the center panel a speeded-up, double-exposed image of the conquest of Italy that awaits. Forget visual Berlioz. This is visual William James, visual James Joyce: filmed stream of consciousness. There'd be nothing like it in a movie, at least not that I can think of, until that light show toward the end of 2001: A Space Odyssey, 40 years later — and Kubrick did it with a gratuitousness quite unlike Gance. Napoleon as a whole is my greatest moviegoing experience (the snowball fight! the unfurling of the tricolor as Bonaparte escapes Nelson!) — but the most thrilling is that visualization of stream of consciousness. It's like the Eroica played on airplane propellers — and sounding even better than Furtwangler conducting it.

No wonder Feeney won the Pulizter Prize for Criticism in 2008. Speaking of criticism, Brian Darr traces Napoleon's reception over the past several decades, noting in particular how revivals have affected its standing on those "greatest films of all time" lists. For more on the history behind the film and its times, see Sean Axmaker at Parallax View, Daniel Eagan for Smithsonian Magazine and Dennis Harvey for Fandor. Michael Guillén talks with Charles Tabesh about TCM's role in the restoration and presentation and the San Francisco Silent Film Festival has not only a Napoleon FAQ but also page with links to further coverage.﻿

Update, 3/26: "At 9:40 pm Saturday, the near-capacity crowd at the 3000-seat Paramount Theatre rose from the places it had settled into eight hours earlier and cheered a mighty cheer, the kind of full-throated, sustained roar not usually heard in a movie theater," reports Kenneth Turan in the Los Angeles Times. "'My God, wasn't that incredible?' said Los Angeles-based author and film historian Cari Beauchamp, who came to Oakland for the screening. 'Absolutely a once-in-a-lifetime experience. Just glorious, glorious, glorious.' … Cinema fans came from around the world to experience all this in the Paramount Theatre, a stunning Art Deco time machine that looks exactly as it did when it opened in 1931. Director Alexander Payne arrived from Los Angeles, determined to see Napoleon twice on the opening weekend. Others came from as far away as Amsterdam and the Czech Republic." The San Francisco Silent Film Festival "went out on an expensive limb to bring Napoleon to the screen again. For these two showings and two to follow next weekend the total cost was about $720,000…. 'It was a very gutsy thing to do,' said Bruce Goldstein, director of repertory programming at New York's Film Forum…. 'People ask me, "Why isn't this in New York?"' Goldstein said, referring to the 1981 Radio City Music Hall screening. 'But Radio City would cost 10 times more.'"﻿

Update, 3/27: "Napoléon is more than a restoration," writes Luke McKernan, "indeed it is more of a re-creation, an attempt by Brownlow to build ever close to that original conception of the film, to re-enter the mind of Abel Gance. There have been so many versions of the film (Gance tinkered with his film for years, much as Brownlow would then do), it would be hard to point to any one that would be definitive. Is the longest version the best? Of course not – at least, not necessarily so – but that doesn’t seem to be the point. It is the quest that matters, quite as much as whatever stage the film may have reached at its successive screenings. The auteur was once Abel Gance; now the auteur is Kevin Brownlow."﻿

Update, 4/8: "I was well prepared for the 3-screen finale but its appearance was still awe-inspiring," blogs shahn. "Gasps and spontaneous applause exploded from the audience as the curtains swing back to reveal the Polyvision screens. What struck me at first was the light — three screens means much more light in the room. All of the heads in front of me were lit up, putting the audience into the film. The sudden light felt like the first warm spring day after winter. It was really, really cool."﻿

Updates, 4/12: "Gance's film is very much an example of leaving a myth unexamined — or worse, peppering it with enough historical tidbits that the director seems half-convinced that this is all what actually happened," writes Duncan Gray. "The historical narrative is foggy, and Napoleon the man is ultimately something of a red-herring. Instead, the film lives on today as a celebration of cinema itself."

"I wouldn't quibble with anyone who said it was one of the greatest films ever made nor with someone who thinks that it isn't even one of the top 10 of the silent era," writes Dave Filipi of the Wexner Center for the Arts. "There really isn't anything to compare it to, especially when one considers the theater, the live score, and the audience primed to burst into generous rounds of applause in response to any of Gance's stylistic flourishes…. As wondrous and unforgettable as the screening was, I found myself lamenting the fact that I may well never have another cinematic experience even close to this one."