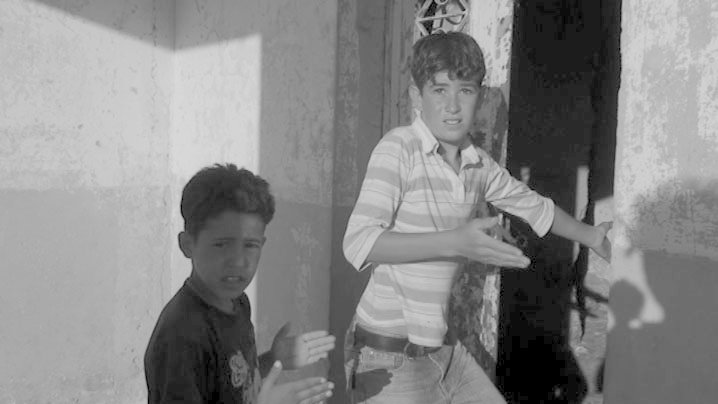 "Hitting the film festival circuit for a year with In the City of Sylvia, José Luis Guerín wanders the streets to catch glances of human bustle in a variety of locations," writes Fernando F Croce, reviewing Guest at the House Next Door. "The trouble with Guerín's evocative two-hour diary is that, attempting to convey a feeling of life continuously swarming away from the confines of festivals, it reveals a dearth of concern for specific subjects that turns the faces and places into an amorphous mass. Touching without exploring, it still showcases enough of Guerín's warm touch to make one wish more visiting filmmakers would stray from their hotel rooms, camera in hand." More from Jonathan Holland (Variety), Daniel Kasman (The Daily Notebook), Karina Longworth (Voice) and Eugenio Renzi (Independencia, 4.3).

Megan Lehmann in the Hollywood Reporter on Paul Clarke's Mother of Rock: Lillian Roxon: "There's a Lillian Roxon-shaped hole at the center of this surprisingly inert documentary about an unsung female rock writer whose dynamism drew in such New York luminaries as Andy Warhol, Bob Dylan, Patti Smith and Iggy Pop. A static handful of photographs, teasingly obscure re-creations and recorded phone conversations with confidante Danny Fields stand in for Roxon, who died in 1973." All in all, it's "an affectionate but unsatisfying portrait — with a killer soundtrack." More from Dennis Harvey in Variety.

"What do people do, when the law prevents them from protecting themselves?" asks John Anderson in Variety. "That's the question at the heart of The Pipe, a stirring, character-rich docu from Irish helmer Risteard Ó Domhnaill about Shell vs Rossport, Ireland, where the oil company decided to run a gas line, and the community decided otherwise. The Irish don't harbor a lot of affection toward things British, but those behind The Pipe might think fondly of BP, whose recent gulf disaster will add currency and urgency to this charismatic David-Goliath tale."

"One of the more thought-provoking documentaries in recent years about the Israel-Palestine stalemate, Precious Life beautifully wraps the fundamental dilemmas of the conflict into the moving story of a baby fighting for his life," writes Screen's Mike Goodridge. "Directed and shot by [Shlomi] Eldar, an Israeli TV journalist who has been covering life on the Gaza strip for 20 years, the film rarely resorts to the sentiment pregnant in a story like this, yet asks some emotive questions of its characters and audience." More from John Horn (Los Angeles Times).

"Over Your Cities Grass Will Grow is Sophie Fiennes's towering portrait of the artist Anselm Kiefer at work at La Ribotte, his massive studio in Barjac, France," blogs Tom Hall. "A traditional documentary film would typically try to conform to the 'natural' state of the subject while making the 'meaning' of his work the centerpiece of the narrative, but Over Your Cities Grass Will Grow instead grapples with the emotional impact of Kiefer's art, using stunning cinematography (the film was shot in CinemaScope) and beautiful use of the music of György Ligeti to great effect." Earlier: Cannes roundup.

"Inside Job is classy and thorough, but not much in it will play as a revelation to a news junkie," blogs Karina Longworth for the Voice. "To steal a tactic from [Charles] Ferguson, who loves graphics that break his events and concepts down into easily digestible lists, the director brings three things to the table: excellent collation skills, a feel for Hollywood slickness (best exemplified in the film's exemplary credit sequence, which sexes up Ferguson's 'cast' of heroes and villain talking heads to the tune of Peter Gabriel's 'Big Time'), and Ferguson's own persona." More from James McNally, Stephen Saito (IFC) and Scott Tobias, who gives it a B- at the AV Club. Cannes.

Joe Leydon in Variety: "After Not Quite Hollywood, his explosive expose of B-movies from Down Under, Melbourne maverick Mark Hartley should further please connoisseurs of sleazy cinema with Machete Maidens Unleashed!, a richly bemused and slickly produced overview of the lurid schlock inexpensively shot in the Philippines between the 1960s and 80s." Noel Murray at the AV Club: "It's way too anecdotal, but the anecdotes — and the clips — are funny and exciting, and I appreciated that Hartley didn't shy away from the debate over whether the countless women-in-prison movies shot in the Philippines were empowering to women or simply degrading. There's a lot of valuable data here for film scholars; it's just put together too haphazardly." More from Megan Lehmann (THR) and Bob Turnbull. For the TIFF Midnight Madness Blog, Todd Brown has five questions for Hartley; the Austin Chronicle's Marc Savlov has a few more.

Laura Israel's Windfall "could take the sails out of wind power," writes Anthony Kaufman for the Wall Street Journal. "The film observes the deeply divided residents of Meredith, New York — an Upstate farm community in decline — as they debate the pros and cons of allowing wind turbines on their land. Local proponents champion the promise of green energy and monetary compensation, while detractors question the efficiency of wind-generated energy and the drawbacks of living among 400-foot tall towers with gigantic rotating blades." More from Howard Feinstein (Filmmaker), Stanley Fish (NYT), Stephen Saito (IFC) and Michael Tully (Hammer to Nail).

"Childbirth goes zen with extreme and serene tactility in Genpin, veteran Naomi Kawase's unornamented ode to natural birth and to a gentle Japanese obstetrician who has made it his life's vocation," writes David D'Arcy for Screen. "Kawase's documentary is not a debate on how to bear a child, but a celebration of an approach that all in the film agree to be the best. Based on what we see, the approach works effectively, although we don't see any evidence to the contrary."

Vibeke Løkkeberg's Tears of Gaza "deals with the 2008-09 bombing of Gaza by the Israeli military," explains the Hollywood Reporter's Kirk Honeycutt. "Her strategy is to focus on the horrific impact this has on civilians — mostly women and children; in other words, how war affects the innocent. Løkkeberg, a Norwegian actress, author and filmmaker, has scrubbed away all context, political or otherwise. This could be any war descended on an urban population." And it is "gut-wrenching to watch — perhaps the ultimate anti-war film — but will the word 'Gaza' in the title stop people?" More from John Anderson (Variety).

"The beauty of sitting down to watch a new Kim Longinotto film is that even if you don't have any idea what it's about, you can trust that it's going to deliver," writes Michael Tully at Hammer to Nail. "Her latest, Pink Saris, is no exception. Sampat Pal Devi is the founder and leader of the gulabi gang (aka, Pink Gang) in Uttar Pradesh, India. Having suffered through her own abusive childhood and forced into an adolescent marriage at the age of 12, Sampat gradually found the strength and courage to reinvent herself as a crusader for women's rights.... Equal parts Divorce Iranian Style and Rough Aunties, Pink Saris is another emotionally gripping document of the rampant, bone-deep misogyny that continues to plague our planet." More from John Anderson (Variety), David D'Arcy (Screen) and Alison Frank (Little White Lies).

At the AV Club, Noel Murray gives a C to "a French documentary about a fake game show designed along the same parameters as [the] Milgram [Experiment]: there's a dude in a box, pretending to be electro-shocked by an unsuspecting volunteer whenever he answers a question wrong. This time, over 80% of the participants follow the 'game' through to the end, although an even larger number of them also say something to the effect of, 'C'mon, it's a TV show; I knew you weren't really going to hurt anybody.' That documentarians Christophe Nick and Thomas Bornot consider this a further example of how easily people are controlled — as opposed to an example of how savvy they are — is just one of the ways that The Game of Death is irritatingly presumptuous."

"Janus Metz made news when his war documentary Armadillo became the first documentary ever to screen as part of Critics' Week in Cannes," writes Todd Brown at Twitch. "It made even more news when it took home the top prize. But as well deserved as these accomplishments are I would suggest that the greatest accomplishment of Metz and his incredibly gifted crew was simply surviving making the film without any of their team getting shot." More from Scott Tobias, AV Club, B-.

"Jody Shapiro takes a generally light-hearted look at what makes a nation in How to Start Your Own Country," writes Shelagh M Rowan-Legg in Little White Lies. "The film begins with a small 1.5 acre plot of land in Nevada, which the owner has proclaimed as its own country, complete with a unique currency and a passport control office." The film is "light-hearted in its exploration of what drives certain individuals to 'secede' due to frustration with government, desire for autonomy, or just as an indulgent experiment." More from John Anderson (Variety) and Noel Murray (AV Club).

"[C]onventional wisdom needs to be questioned and the tendency of politicians and activists like Al Gore to use scare tactics to motivate people is often insidious," concedes Scott Tobias at the AV Club. "However, [Ondi Timoner's] Cool It basically fights propaganda with propaganda, accepting [Bjørn] Lomborg's work at face value while giving little time to the many scientists who have taken issue with him.... Here's a guy who's doing to environmental science what the Atkins Diet did to weight loss, and Timoner isn't looking for anyone to call his conclusions into question? Bullshit." More from Dan Fainaru (Screen), Rob Nelson (Variety) and Steven Zeitchik (Los Angeles Times).

Fernando F Croce at the House Next Door on Frederick Wiseman's Boxing Gym: "Rather than a fixation on the violence of the sport, there's a serene appreciation of muscle, sinew, and movement: 'It's about the art,' somebody says. A more detailed look at the personal drives of the aspiring fighters would have made for more piercing reportage, though it's hard to fault Wiseman's optimistic contemplation of the almost familial atmosphere of democratic athleticism on the screen."