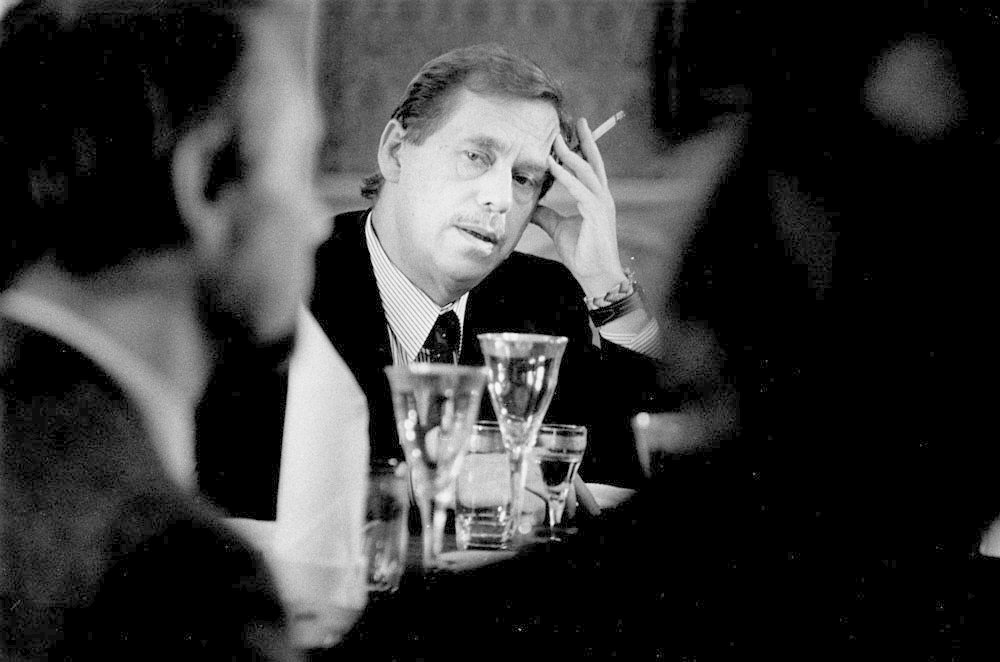 "Václav Havel, the dissident playwright who wove theater into politics to peacefully bring down communism in Czechoslovakia and become a hero of the epic struggle that ended the Cold War, has died. He was 75." Karel Janicek for the AP: "Havel was his country's first democratically elected president after the nonviolent 'Velvet Revolution' that ended four decades of repression by a regime he ridiculed as 'Absurdistan.' … Havel left office in 2003, 10 years after Czechoslovakia broke up and just months before both nations joined the European Union. He was credited with laying the groundwork that brought his Czech Republic into the 27-nation bloc, and was president when it joined NATO in 1999. Shy and bookish, with wispy mustache and unkempt hair, Havel came to symbolize the power of the people to peacefully overcome totalitarian rule."

"In his youth he formed a literary circle called Thirty-Sixers, after the year of its members' birth," notes Books and Writers. "With the future film director Milos Forman he visited the poet Jaroslav Seifert, who read his first texts. Although Kafka's literary heritage was nearly buried by the authorities, his works deeply influenced Havel…. As a playwright Havel has used dramatic techniques to make situations or characters seem ridiculous. In The Memorandum (1965) he introduced an artificial language that is supposed to allow for greater precision in communication. The absurd attempt results in a complete breakdown of human relationships. The theme was taken even further in The Increased Difficulty of Concentration (1968), in which Havel attacked fashionable sociological terminology. 1968. In the 1970s Havel wrote a series of one-act plays, Audience (1978), Private View (1978), and Protest (1978), in which the protagonist is a dissident playwright in trouble with the authorities. Most plays from this period are built around the writer Vanék, who faces the absurd realities of Czech life."

Radio Prague not only has full biography recounting Havel's years a dissident and politician but also Rob Cameron's report from the set of Leaving, Havel's debut as a film director. Based on his own play, Leaving is "about — what else? — a politician trying to adjust to a new life after leaving politics." It "tells the story of Vilém Rieger, the former chancellor of an unnamed country, locked in a battle of wills with his successor, the unsavory Vlastík Klein. It's a King Lear-like contemplation on a politician's frustrating impotence at finding himself slowly being forced out of his beloved government villa, with several of Havel's favorite actors among the cast. They include his wife Dagmar [Havlová], who plays the chancellor's wife, Irena."

"At home, the slogan 'truth and love will prevail over lies and hatred' which Václav Havel coined during the Velvet Revolution of 1989 has been ridiculed and dismissed by many, including the current president Václav Klaus," reported Jan Richter this summer. "But abroad, the story of an artist turned political prisoner turned president never lost its appeal." And he quotes political commentator Jiří Pehe: "The real danger for Václav Havel is not that his imprint in the Czech national memory will remain as it is now but rather that he will jump over the realm of history and wind up in the real of mythology."﻿

Updates: In 1999, Slavoj Žižek's review of John Keane's Václav Havel: A Political Tragedy in Six Acts in the London Review of Books became an assessment of the then-popular notion of a Third Way: "How do we get from the lone, fragile dissident with a crumpled jacket and uncompromising ethics, who opposes the all-mighty totalitarian power, to the President who babbles about the anthropic principle and the end of the Cartesian paradigm, reminds us that human rights are conferred on us by the Creator, and is applauded in the US Congress for his defence of Western values? Is this depressing spectacle the necessary outcome, the 'truth,' of Havel the heroic dissident? To put it in Hegel's terms: how does the ethically impeccable ‘noble consciousness' imperceptibly pass into the servile 'base consciousness'? Of course, for a 'Post-Modern' Third Way democrat immersed in New Age ideology, there is no tension: Havel is simply following his destiny, and is deserving of praise for not shirking political power. But there is no escape from the conclusion that his life has descended from the sublime to the ridiculous."﻿

The New Yorker's Richard Brody: "It's worth recalling that Havel is, above all, an artist — a playwright whose inspirations are cultural; who was famously inspired by Frank Zappa, Samuel Beckett, and other artists from abroad; who, as David Remnick noted in his 2003 portrait of Havel in the magazine, added to a NATO summit in Prague 'theatrical performances organized by Havel himself,' which involved, among other things, 'booming renditions of the "Ode to Joy," a souped-up "Marseillaise," and John Lennon's "Power to the People"'; and who, in 1992, resigned the presidency of Czechoslovakia rather than preside over the breakup of the country. He was a fighter for freedom — and a universalist, who saw the higher aspirations of humanity in the desire to transcend apparent differences in the love of an ideal. I can only imagine how outraged he must have been to see even this idea, of the international, hijacked by the regime that imprisoned him."

Today, David Remnick adds: "In a parallel universe, in a luckier realm, Havel would have lived out his life as a Czech epigone of Ionesco and Beckett, a carefree son of privilege, free to write, to pursue his pleasures, to listen to the rock ‘n roll he loved. Instead, like a living figure from Kafka, he was born to a system where absurdity, not law, ruled; calmly, resolutely, he pursued a life of dissidence, led a revolution, and then assumed a home in the Castle, the seat of power in liberated Prague…. What world leader has ever exposed the texture of his own mind with more honesty? His essays, letters, and speeches comprise the spiritual autobiography of a public man. Other dissidents have reached the seat of power — in post-colonial Africa, for example — but none with the same complexity of spirit."

Remnick also presents "a top-ten list, the first entry being Havel's greatest hits, and the rest books and writers whom Havel admired — contemporaries or near contemporaries who lived in the same region and under similar regimes."﻿