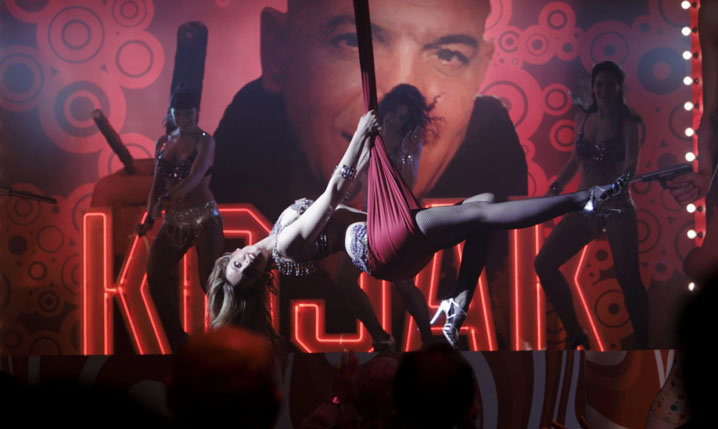 Jay Weissberg in Variety on the film for which Álex de la Iglesia has won the Silver Lion and an Osella for Best Screenplay in Venice, Balada triste de trompeta, known among English-speakers as either as A Sad Trumpet Ballad or The Last Circus: "Loud, tedious and unattractive in every sense, this barrage of blood set during the Franco regime combines the helmer's customary cartoonishness with horror and ups it a thousand notches. Presumably his two vengeful clowns are meant to be an in-your-face comment on Spain's fascist past, but the nonstop splatter has all the insight of an ultraviolent videogame."

"The hideous tug of war is between puffy, owlish Sad Clown (Carlos Areces) and drunken, sadistic Happy Clown (Antonio de la Torre), yin-yang monsters whose deformed psyches eventually can no longer be camouflaged by greasepaint," writes Fernando F Croce at the House Next Door. "At the center is Carolina Bang's toothsome acrobat — the soul of Spain herself? If so, all the more credit to de la Iglesia for making her a darting-tongued lewdling who perversely relishes her own vile ravishment. The filmmaker's lack of discipline ultimately mars the subtext, but the brazen fusion of Jodorowsky and Tashlin remains a heady mix that shows how timid and safe Pan's Labyrinth really was."

"[T]he film features a scattered mosaic of silent-film references, touching on James Whale and Tod Browning," notes Guy Lodge at In Contention, "but its nightmarish sound mix makes a far stronger case for the merits of pre-talkie cinema."

"Normally, I would run a mile from a movie with oddball stiltwalkers, flying midgets and comedy human cannonballs, but this had a wildness, sexiness and daring insanity that I found weirdly compelling," writes the Observer's Jason Solomons. "Two rampaging, disfigured clowns with machetes and machine guns duelling over a large-breasted trapeze artist on top of a 200ft-high cross? You gotta see that."

Reports Camillo de Marco for Cineuropa: "'It's my most personal and risky film; I've put my heart and soul into it,' explained the director, who identified with both protagonists. 'In my opinion, it's first and foremost a love story: mad, wild and horrible. In short, a mix of horror and passion: the things I love.' On the dark period of the dictatorship, Iglesia says he has 'brought out the anguish, with shades of film noir and irony, in order to be able to bury it. We have a terribly painful past which influences all our present-day lives. We've suffered pain and torture: things which change people and destroy the life of the film's protagonist.'" 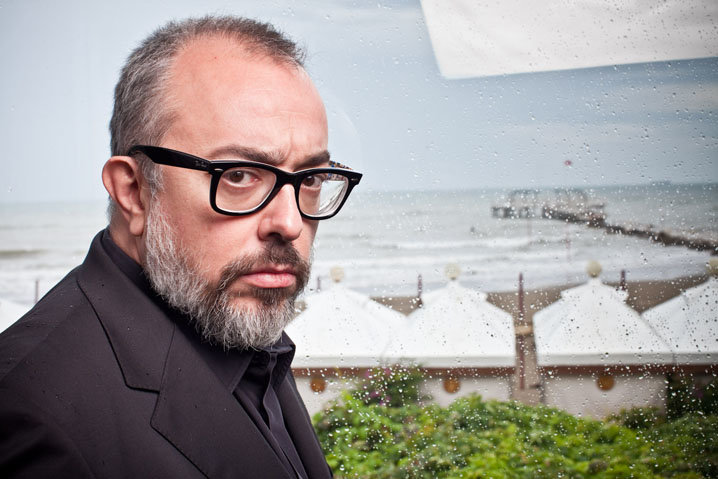 A Sad Trumpet Ballad screens in Toronto on Tuesday, Wednesday and September 19.

Update, 9/16: "[T]hough the film becomes a bit of an unwieldy mess at points, unable to fully support the full scope of what de la Iglesia is attempting it still remains one of the most vital and compelling pieces of work in the career of one of the world's most unique and unusual talents," writes Twitch's Todd Brown.

Update, 9/20: "Beginning in carnage and soaring into surrealist tragicomedy, Balada Triste is a film hellbent on madness and in full control of it," writes Time's Richard Corliss. "Is it the best movie in Venice and Toronto, or the worst? Could be either. But it was surely the most."