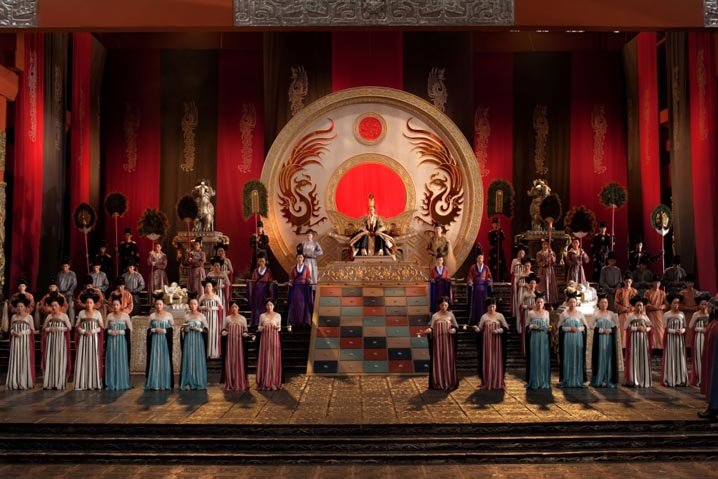 "Tsui Hark, who directed about half of the best films of Hong Kong's golden age (Peking Opera Blues, Once Upon a Time in China, Zu: Warriors from the Magic Mountain) and produced most of the other half (A Better Tomorrow, A Chinese Ghost Story, Iron Monkey), returns in fabulous form with this gorgeous action picture about the intrigue attending the rise of history's first female emperor," writes Time's Richard Corliss. "Detective Dee is the first China-Hong Kong coproduction since Hero to make good on the grand promise of epic entertainment."

"An inventive marriage of ancient China and Agatha Christie, Detective Dee and the Mystery of Phantom Flame is a lavishly overwrought historical whodunit," writes Justin Chang in Variety. "A string of hideously baroque murders and various imperial intrigues keep Tsui Hark's costume drama-actioner percolating most of the way, though it eventually bogs down in a surfeit of red herrings and CGI.... Zhang Jialu's screenplay centers around the character of Di Renjie, or Detective Dee (played by Andy Lau), a real-life Tang Dynasty official who has since been popularized in mystery novels and TV series."

"Lau said the director gave him the homework of figuring out what type of animal Detective Dee could be, saying they would develop the character from there," reports Sheri Jennings for the AP. "The conclusion was, 'He is a monkey. Swift and intelligent.'"

"It's been a while since Tsui Hark has produced a real crowd pleaser," writes Todd Brown at Twitch. "Once the absolute top of the heap when it came to action film, his peak period spinning out hits by the fistful as both a producer and a director, the general consensus is that his last really good film was Time and Tide a full decade ago with more recent efforts like Seven Swords and Missing bogging down in overly convoluted plots and uninspired scripts." This time out, "Tsui Hark has found his missing sense of humor, people, and it looks good on him.... A bit of comedy, a bit of mystery, some romance, some martial arts, a dash of horror, a trace of palace intrigue, Detective Dee is like a full season of your favorite kung fu soap opera distilled down into a more compact package with far better production values."

For Deborah Young, writing in the Hollywood Reporter, "a little character development and an adult emotion or two crammed between jaw-dropping set pieces would have been appreciated."

Update: "Tsui reaches for no profundity and understandably finds none," writes Daniel Kasman here in The Daily Notebook, "but his images are clear, his action slick and clever, and everyone is just so damn affable, even the grouchy eunuch."

Update, 9/19: "Sammo Hung's choreography, with fight scenes shot as cartwheeling flurries of gold, blue, and crimson, is just one of the pleasures in a film that also includes shapeshifting heroines, talking stags, a toppling colossus, cheesy digital compositions, and wacky exchanges ('What's a Phantom Bazaar?' 'It's a spooky pandemonium!')." Fernando F Croce at the House Next Door: "Ripping fun in ways Guy Ritchie's Sherlock Holmes could only dream of."

Update, 9/21: "Detective Dee is the best Tsui Hark movie in 14 years," blogs Grady Hendrix, "and while it's too uncertain of itself to join the ranks of his classics, it's a solid b-list entry in his career, standing shoulder-to-shoulder with We're Going to Eat You, A Better Tomorrow III and The Swordsman. It's also, fittingly, the 50th film from Tsui's Film Workshop, which has reshaped the Hong Kong film industry, and it's a sign that, like grandpa getting a mail order bride, there's some fight left in the old boy yet."