On the right: Bob Rafelson (left) and Bert Schneider (right)

"Bert Schneider, the iconoclastic producer behind a trio of influential movies — Easy Rider, Five Easy Pieces and The Last Picture Show — that captured the rootlessness and discontent of the late 1960s and 70s and became symbols of a new era in Hollywood, has died," reports Elaine Woo in the Los Angeles Times. "The son of a Hollywood power broker — his father, Abraham, ran Columbia Pictures in the late 1960s — Schneider helped revitalize moviemaking in the 'New Hollywood' movement in which directors, not studios, held the creative reins and made movies that embraced the sensibilities of the emerging counterculture. 'This was a beginning of the independent movies and, more than that, a kind of celebration of anti-establishment movie subjects,' producer-director Bob Rafelson, who was one of Schneider's partners in the company that produced Easy Rider and six other films, said in an interview Tuesday. 'Bert broke with everybody's rules,' Rafelson said. A political activist who was close to 1960s radicals Huey Newton and Abbie Hoffman, Schneider produced 11 films between 1968 and 1981, including the Oscar-winning, anti-Vietnam-War documentary Hearts and Minds (1974) and the Terrence Malick-directed drama Days of Heaven (1978)."

"Mr Schneider and Mr Rafelson, his frequent filmmaking partner, began their producing careers with much lighter fare," notes Anita Gates in the New York Times. "In the mid-1960s, when both were working at the Screen Gems division of Columbia Pictures, they created The Monkees, a freewheeling comedy about a Beatles-like rock band, the four young members of which the two men cast through a classified ad. The fictional group soon had real hit records, and The Monkees received the 1967 Emmy Award for outstanding comedy series. A year later, Mr Schneider and Mr Rafelson made Head, a feature film depicting the members of the Monkees through a druggy haze. It flopped but is now considered an intriguing period piece."

In the Hollywood Reporter, Mike Barnes recalls Schneider's most famous break with Hollywood protocol: "During his Oscar acceptance speech for Hearts and Minds, Schneider said, 'It’s ironic that we're here at a time just before Vietnam is about to be liberated' and then read a telegram from Viet Cong official Dinh Ba Thi that thanked the US anti-war movement 'for all they have done on behalf of peace.' Later, Oscar co-host Frank Sinatra responded on behalf on the Academy, saying, 'We are not responsible for any political references made on the program, and we are sorry they had to take place this evening.'"﻿ 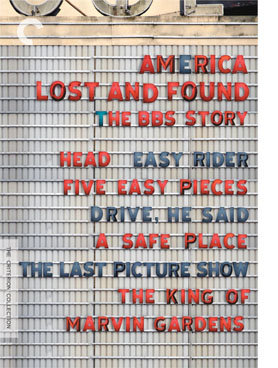 A little over a year ago, Criterion released a seven-film DVD box set, America Lost and Found: The BBS Story﻿. "The working atmosphere at BBS had a spontaneity, lack of pretense, and dedication that stands by itself in my experience," recalled Peter Bogdanovich at the time, "and the often risky and influential work that came out of it, therefore, is no accident." But his post was primarily about "Bob Rafelson's disturbing and memorable, peculiarly American tragedy," Five Easy Pieces (1970). The set also includes Easy Rider (1969), which, of course, "became an enduring pop-culture icon," Bogdanovich's own The Last Picture Show (1971), "which received eight Oscar nominations and won two," as well as "Rafelson's challenging The King of Marvin Gardens with [Jack] Nicholson and Bruce Dern as fractious brothers; Head with The Monkees in an avant-garde script by Nicholson and Rafelson; Henry Jaglom's sensitive and poetic A Safe Place with Nicholson, Tuesday Weld and Orson Welles as a Jewish magician; and Drive, He Said, distinctively and daringly directed by Nicholson."﻿

More on Five Easy Pieces from Kent Jones and on Head from Chuck Stephens, both for Criterion. And more on BBS and the 70s in general from Manohla Dargis (New York Times) and Dennis Lim (LAT).

Update: "Schneider was no bandwagon jumper, but a committed leftist," writes Ronald Bergan in the Guardian. He did more than pal around with Newton and Hoffman: "Schneider helped Newton escape to Cuba to avoid prosecution on murder charges in 1974, and lent support to Hoffman when he went underground after being charged with conspiracy and inciting to riot at the 1968 Democratic National Convention…. Hearts and Minds was among the very few US films of the mid-70s to focus on Vietnam from an anti-war angle. Shot over a period of a year at a cost of about $1m, the theme was illustrated by the military analyst Daniel Ellsworth's remark: 'We weren't on the wrong side — we were the wrong side.'"﻿

Update, 12/18: "The success of [Easy Rider, The Last Picture Show and Five Easy Pieces] encouraged Universal to establish a low-budget unit that eventually produced American Graffiti," recalls Peter Biskind for Vanity Fair. "In other words, if Schneider had followed his father into the front office like a good boy, instead of going over to the dark side, there would have been no Dennis Hopper, no Peter Bogdanovich, no Jack Nicholson, and no George Lucas…. After movies, politics, women, and drugs — or maybe it was drugs first, and then women — Schneider's passion was litigation.  He refused to do interviews on the theory that if he never appeared in the press, he could not be considered a public figure, thereby making it more likely that he would win when he sued writers for libeling him. For me, when I was writing Easy Riders, Raging Bulls, about a decade in which Hollywood was bursting with brilliant, creative people, I found Schneider the most compelling, and I virtually stalked him. I finally got my interview when he got on the phone to tell me why he wouldn't do it, and in the process couldn't help himself. He was one of those."﻿