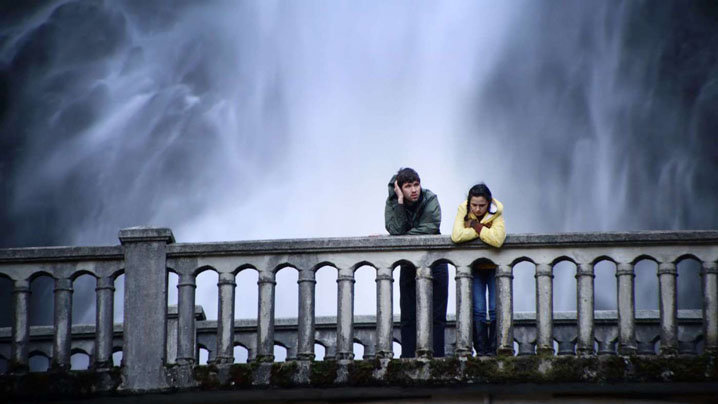 "Low-key and lovely," begins Manohla Dargis in the New York Times, "the independent movie Cold Weather opens with a shot of raindrops clinging to a pane of glass, a fitting introduction for a movie about characters who are revealed gradually, as if through a glass — not darkly, but obliquely. With brooding, expressive digital photography, a rooted sense of place and characters that seem as real as the people next door, the director Aaron Katz has created a lived-in world that's so intimate and familiar that even with the story's unexpected turns, you might not initially see its art for its everydayness."

"Cheerfully diffident, garrulous yet uninflected, blithely self-absorbed, the mumblecore brand proliferates," writes J Hoberman in the Voice. "Last year's star vehicles Greenberg and Cyrus introduced the concept of mega-mumble. The low-budget musical Guy and Madeline on a Park Bench pioneered mumble-chord; Tiny Furniture was part psycho-drumble, part sit-cumble. Premiering with the latter at last spring's South by Southwest Festival, Cold Weather, Aaron Katz's Portland, Oregon-set junior detective mystery, stakes a claim as the founding work of mumble-noir… Steadily building in intensity from sluggish interest to mild excitement, Cold Weather is a slight movie with a long, circuitous fuse — and that's the point. Katz is something of a trickster, closer in spirit to Jacques Rivette than Raymond Chandler; his movie is not a riff on mystery stories so much as it is a riff, pure and simple, on the mystery of stories."

For Zachary Wagon, writing for Filmmaker, "Cold Weather provides something of a blueprint for how, with the right approach, filmmakers can breathe new life into tired genres without compromising their more original artistic goals. That, in fact, may be the most important observation of Katz's aesthetic in Cold Weather — he does not compromise how he views the world for the sake of his story. Cold Weather is neither a mumblecore film told with a mystery hook nor a mystery movie with a mumblecore delivery; rather, it's a natural blend of genre and individual voice, formula and originality, which works together to create something entirely fresh — which, of course, is how storytelling modes always progress: perhaps in 40 years we'll be bemoaning the state of the redundant, Katzian pseudo-genre narrative."

"Yann Arthus-Bertrand's Home is an urgent jeremiad decrying man's plundering of the earth's natural resources," writes Andrew Schenker in the Voice. "As mournful strings set the tone, narrator Glenn Close delivers a withering, if repetitive, account of humanity's crimes against the planet, a list that includes factory farming, deforestation, and the building of megalopolises that require an ever-increasing supply of energy to power. But while Close's testimony is sufficiently terrifying, moving toward an apocalyptic vision of climate-change catastrophe, the urgency of her tone is belied by the placidity of the film's visuals." More from Jeannette Catsoulis (NYT) and Diego Costa (Slant, 2/4). Michael Slenske talks with Arthus-Bertrand for Interview.

"American Grindhouse captures the intoxication of being an exploitation-movie junkie sitting in a theater for several consecutive hours as an onslaught of disreputable films plays before you," writes Chuck Bowen in Slant. "Director Elijah Drenner and co-writer/producer Calum Waddell have structured the film as a tour of the history of American exploitation cinema that opens with the origin of filmmaking at the hands of Thomas Edison in the late 1800s and closes with the release of current faux-exploitation movies such as Grindhouse. In between, virtually every kind of low-budget fringe film gets a shout-out: the pre-Code films of the 1920s-1930s, the birthing docs of the 1940s, the drive-in biker movies and teenage monster movies of the 1950s, the nudist colony films, the crueler bondage films, Nazi fetish films, blaxsploitation, etc. In between refreshingly nasty, telling clips are testaments from a veritable who's who of veterans and admirers, including [Jack] Hill, [Hershell Gordon] Lewis, Joe Dante, John Landis, Allison Anders, Fred Williamson, Don Edmonds, and Larry Cohen, with Robert Forster presiding over the entire affair with his distinctively dry, sadly affectionate narration. The doc is very engaging and has clearly been made with quite a bit of love, and, for that alone, you want to cut it some slack. But the film, as the above might imply, is over-stuffed, particularly at a needlessly slim 80 minutes." More from Mike Hale (NYT), Mark Holcomb (Voice) and Justin Stewart (L).

"As movies about the fashion world go, Dressed isn't very fabulous," writes Paul Schrodt in Slant. "But then again, director David John Swajeski isn't trying to make a typical fashion movie: His documentary follows a young, aspiring fashion designer, Nary Manivong, who grew up homeless in Columbus, Ohio, after he was abandoned by his Laos-born parents at the age of 14. As the movie takes pains to communicate, it's this troubled past that has both inspired Manivong creatively (after picking up his first copy of Vogue as a teenager, he 'knew immediately it was what I wanted to do') and driven him to meet his end goal." More from Jeannette Catsoulis (NYT), Ernest Hardy (Voice) and S James Snyder (TONY, 2/5).

Jeannette Catsoulis stakes her ground at NPR: "Had Black Swan not screeched its way to an undeserved Oscar nomination, we might never have seen The Other Woman, Natalie Portman's 2009 performance as a second wife haunted by the loss of a newborn and the weight of a terrible secret. That would have been a shame; if your limit on bereavement movies is only one per annum, skip the overpraised Rabbit Hole and see this one instead." For the NYT's AO Scott, this is "is a not-bad movie (written and directed by Don Roos) based on a pretty good book (Love and Other Impossible Pursuits by Ayelet Waldman)." In the Voice, Melissa Anderson notes that "this minor 2009 Toronto Film Festival entry has been dusted off to capitalize on insatiable, inexplicable Natalie Portmania." Lisa Rosman in Time Out New York: "Ultimately, it's [Lisa] Kudrow who saves the picture: Blazing and bitter, she may be allotted a third dimension only near the end of the movie, but, man, does she pack a wallop when it finally comes." More from Chris Barsanti (Filmcritic.com, 3/5), Jesse Cataldo (Slant, 2.5/4), Richard Corliss (Time), Elvis Mitchell (Movieline, 5/10), Noel Murray (AV Club, C+) and Dana Stevens (Slate). 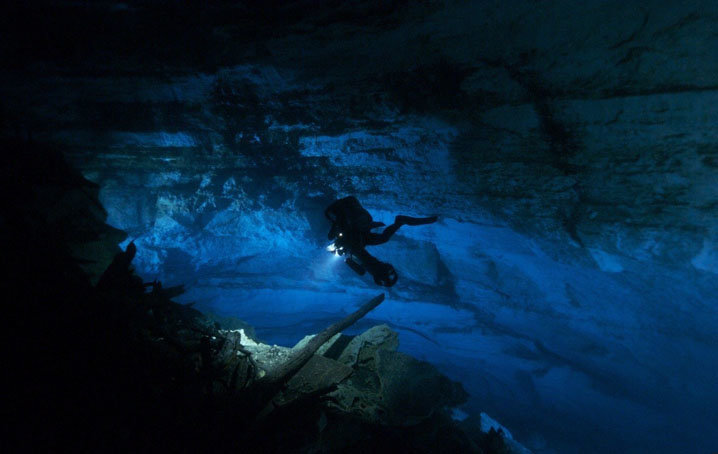 "Filmed at an actual meteorological research station in the Russian Arctic coast that was built under Stalin, How I Ended This Summer combines memorable images of the gorgeous, rugged wilderness, meticulous sound design that emphasizes the characters' isolation, a dash of dark wit and a dose of madness," writes Salon's Andrew O'Hehir. "This isn't quite a horror movie, nor does it have some astonishing plot switchback near the end, but nonetheless there are elements of, say, The Shining or Shutter Island here." More from Mark Asch (L), Stephen Holden (NYT), Nick Pinkerton (Voice), Joshua Rothkopf (TONY, 3/5) and James van Maanen.

"Safely buried under 70 years of cretaceous history, Graham Greene's 1939 novel Brighton Rock was one thing," writes Nigel Andrews in the Financial Times. "So was the 1947 Boulting Brothers film version with Richard Attenborough as Pinkie, the gangland thug who marries a lovelorn girl to prevent her testifying in a murder case. More than half a century ago, both book and movie seemed at home in a Britain ravaged by war or postwar anxieties, by unequal wealth, by the life lotteries of pre-socialism. But will we still need the story — will it still feed us artistically — if the year is changed to 1964? For me, first-time feature director Rowan Joffe has updated cleverly… A few Greene purists have cried woe, but Greene would surely have loved it." 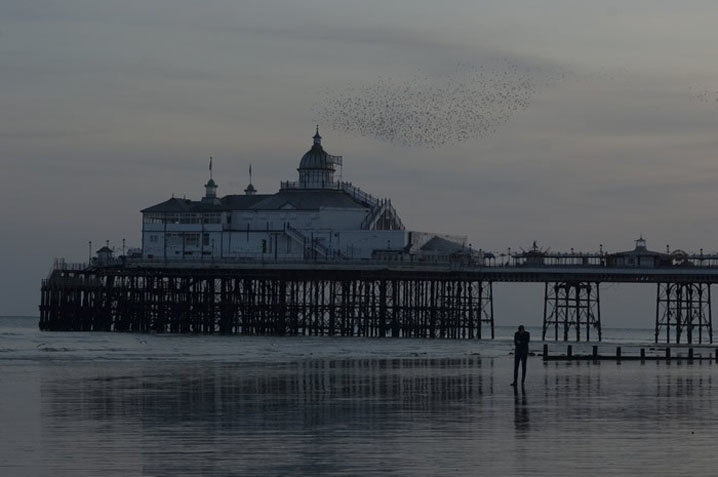 For the Independent's Anthony Quinn, "Joffe's decision to shift the timeframe to the early 1960s of mods and rockers is bold and imaginative, at once distancing the mood from its postwar black-and-white predecessor and fixing it squarely in an era when generational tensions were coming to a head: teenagers had arrived, and the oldsters were running scared… The plot concerns Pinkie's murderous rise through the local underworld and his co-opting of meek waitress Rose into marriage, thus ensuring her silence as a witness for potential prosecution. As Rose, Andrea Riseborough is exceptionally touching; as Pinkie, Sam Riley has the right whippety-lean look, though lacks the cold-eyed malignancy of the character."

Dave Calhoun in Time Out London: "Joffe's other big change is to focus more than the 1947 film on the 'romance' between Pinkie and new wife Rose and allow his story to amble down more by-ways, some of them involving hard-nosed Ida (Helen Mirren), recast as Rose's boss at Snow's cafeteria, but still Pinkie's chief tormentor. The result of this welcome change in emphasis is that the noir momentum of the Boulting brothers' movie is lost in favour of a more sensitive, inquiring take on real human relations. Some may find this new Brighton Rock a slower, less energetic experience as a result, but at least there's more room for Joffe to explore the dirty bedsits and towering cliffs of Brighton with some exquisite photography from John Mathieson and production design from James Merifield."

"You don't even need to love the Boulting brothers' 1947 version to consider this a slightly tragic business, and one whose score is bullying enough to trigger headaches," finds the Telegraph's Tim Robey. The Guardian's Peter Bradshaw has his reservations, but: "This is still a bold and exhilarating picture, summoning up, in its own way, a chill seafront breeze of guilt and shame." Earlier: Reviews from the Toronto and London film festivals.