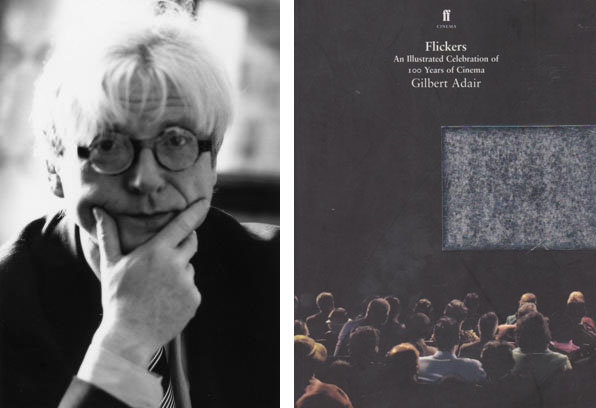 "Gilbert Adair, the acclaimed critic who had some of his own novels turned into successful films, has died aged 66," reports Catherine Shoard in the Guardian. "Adair won the respect of cineastes with volumes such as A Night at the Pictures (1985), Myths & Memories (1986), Hollywood's Vietnam (1981), Flickers (1995), Surfing the Zeitgeist (1997) and with his translation of the letters of François Truffaut (published in 1990). He was a prolific journalist, writing a regular column for the Sunday Times in the 1990s, as well as for this paper — last year he interviewed the French filmmaker Alain Resnais."

As a screenwriter, Adair will be remembered for his collaborations with Raúl Ruiz (The Territory in 1981, Klimt in 2006, Blind Revenge in 2010) and Bernardo Bertolucci (The Dreamers in 2003, based on his own novel, The Holy Innocents). Richard Kwietniowski's Love and Death on Long Island (1997) is based on Adair's novel.

In January 2010, Adair wrote in the Guardian, "I yield to no one in my ­admiration for Rohmer. Yet his ­characters are among the most ­foolish and ineffectual milquetoasts ever to have graced a cinema screen; 90% of their celebrated talk is ­unadulterated ­twaddle. This is ­absolutely not a flaw: it is, rather, a ­species of trompe l'oeil (or trompe l'oreille)." 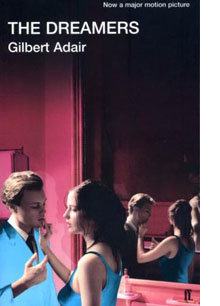 And in 2008, he wrote an overview of Pop Goes the Revolution, "a short season of films released in France just before, during or after the riots. In a way, such a season is doubly appropriate. In the first place, film has always been, of the arts, the most powerful (if, on occasion, distorting) mirror of social textures and trappings, often simply at the not so very trivial level of permitting later generations to see what the past actually looked like. In the second place, May 68 began with the cinema."

Also in 2008, Adair reviewed Richard Brody's Everything Is Cinema: The Working Life of Jean-Luc Godard, calling it "a good, scholarly life, of interest not only to a charmed circle of initiates, and its lapses are fairly minor ones of judgement (he mystifyingly dismisses Bande à part, one of the most puckishly magical films ever made, while praising the almost unwatchable King Lear as being among Godard's finest achievements) and tone (the book is utterly devoid of irony, something that cannot be said about its subject's films)." And in 2004, also for the New Statesman, he argued that Jean Cocteau "was actually one of the most significant artists of the 20th century."﻿

Updates: "Adair, among other things, could never resist a good gag, particularly if it had a postmodern twist," writes Stuart Jeffries in the Guardian. "He once wrote a celebration of Charlie Chaplin called On First Looking into Chaplin's Humour, along with a collection of critical essays entitled The Postmodernist Always Rings Twice (1992)…. But Adair was more than a literary joker. He was a fine critic, novelist, screenwriter and journalist, and a powerful theorist who made one of the most fruitful distinctions in postmodern culture, namely that between between art and culture. Adair's thesis was that you don't need to have experienced the former to do the latter. He wrote that it 'would make not an iota of difference to the majority of people in this country, even those who consider themselves culturally informed, if the plays, films, books, operas, concerts and exhibitions that they have been ordered to see were totally chimerical entities, pure fictions collectively perpetrated by those whose profession or vocation it is to keep the culture industry oiled and operative.'"

Further down that same page, Ronald Bergan recalls that he first met Adair "in 1967 in Paris when we were both teaching English at Berlitz." Wow. "We were both almost nightly visitors to the Cinémathèque at the Palais de Chaillot, and had many arguments about films in a cafe at the Trocadero afterwards, most of which he won and some of which found their way into The Holy Innocents and The Dreamers. We wrote two unperformed plays together, each of us vying to top each other's lines, with neither willing to accede to the other; not a recipe for a successful collaborative effort…. I will miss him greatly." 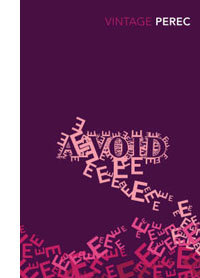 "Perhaps his single most gasp-inducingly clever achievement was a translation of Georges Perec's 1969 novel La Disparition, a work in which the letter 'e' never features, except in the author's name on the cover," suggests the Guardian's Peter Bradshaw. "It was a challenge Adair could not resist, and he published a prizewinning translation in English under the same constraints, entitled A Void…. Looking back at Adair's remarkable bibliography, it is notable that his purely literary interests seem to have been at the forefront of his mind towards the end of his life. It could be that his cinema writing reached its high point as the medium itself reached its century in the 1990s, and the millennial moment prompted some of Adair's most inspired work as a historian and critic."

"The first and only time David Foster Wallace visited Premiere's New York office," recalls Glenn Kenny, "he made a pretty careful inspection of the books I had lying around in my hovel of a semi-detached cubicle, and honed in one one, and made a pretty immediate and enthusiastic connection with it. The book was Gilbert Adair's 1995 Flickers, an unusual kind of meta-history of the first hundred years of cinema, its method being for Adair to choose one still from one film of every one of those hundred years and compose a mini-essay ostensibly about that film but also of course about everything else. I think Dave was immediately impressed by both the eccentricity and the implicit rigor of this nearly Oulipean approach, and I believe that as he read through one piece and then another he was not only impressed by the writing but discovering a kindred spirit in Adair."﻿

Update, 12/10: Jonathan Rosenbaum introduces an interview he, Adair and Lauren Sedofsky conducted with Jacques Rivette which originally appeared in Film Comment in 1974: "I was shocked to learn earlier today of the death of Gilbert Adair, a close friend during the mid-70s (when both of us were living in Paris, and then for some time later, after I moved to London ahead of Gilbert). Although I can't swear to this, it's possible that this collaborative interview may be the first thing that Gilbert ever published; at least it's the earliest piece of his that I know about, and I'm reprinting it now not because it contains his best prose — far from it, in fact — but in memory of our friendship."﻿ 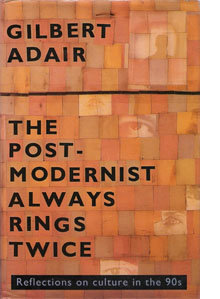 Update, 12/11: Adair was the chief critic for the Independent on Sunday for two years in the late 90s, and today, Mike Higgins writes: "Each week, he filed a column that wasn't merely his pithy, often withering assessment of that week's most eye-catching release; incrementally, his reviews amounted to a rearguard action in defence of his beloved cinema, which, in his view, was suffering in 'an era of pandemic imagorrhea ... [and] such parasitical media as television, video and advertising.' This makes him sound elitist, which he was, and no fun at all, which he certainly wasn't."﻿

Updates, 12/13:  Luke McKernan runs an excerpt from the 1985 essay "On First Looking into Chaplin's Humour," noting: "This takes on the Chaplin vs Keaton debate with imaginative style. Keaton, for Adair, was 'an aristocrat' (you will have to read the full essay to judge why he thinks so); Chaplin stood for something else."

He also points us to Geoff Andrew's remembrance in Time Out London. Andrew and Adair first clashed in the letters section of Sight & Sound, then finally met and bonded at the Midnight Sun Film Festival in Finland: "After that experience, I saw Gilbert rather more frequently, as a friend rather than simply as a partner in critical crime…. I soon found that this extraordinarily versatile and perceptive  writer was as witty, elegant and – it sounds awful, but it most definitely wasn't – enlightening in person as he was on the printed page. In the tradition of that first encounter, our debates continued… but while he almost always stood his ground, Gilbert was never once condescending. He was known for not suffering fools gladly, but also for his good manners, and he never made people feel he wasn't interested in what they had to say.﻿ 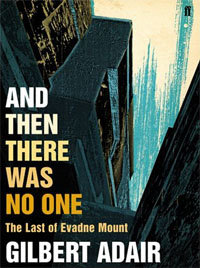 Updates, 12/18: Watching Guy Ritchie's Sherlock Holmes: A Game of Shadows, "I was constantly thinking of my friend and colleague, the brilliant wit, critic, novelist, translator and pasticheur Gilbert Adair," writes the Observer's Philip French. "Especially his postmodern trilogy of parodic detective stories which conclude at a Sherlock Holmes conference in Meiringen, where Adair himself plunges into the Reichenbach Falls with his own central character. Adair calls non-canonical Watson narratives 'Schlock Holmes,' but the final book in his series, And Then There Was No One, contains the best Holmes pastiche ever written, a 30-page re-creation of 'The Giant Rat of Sumatra,' a tale referred to by Watson in 'The Adventure of the Sussex Vampire' and called 'a story for which the world is not yet prepared.' I must declare a slight personal interest here, as there's a pretentious movie critic in the book called Philippe Françaix."

Update, 12/23: Michael Brooke introduces an incredible collection for Sight & Sound: "The narrative content of Gilbert Adair's various obituaries has generally been weighted towards the last two decades of his career: the broadsheet columns, the screenplays, the books (fiction and non-fiction) and the translations (including the mind-boggling Georges Perec-sourced A Void). Although understandable, this has tended to obscure the fact that in the late 1970s and 80s, he was not merely one of the best writers ever to grace the pages of Sight & Sound and the Monthly Film Bulletin, but also one of the most immediately recognisable. When he took over S&S's pseudonymous Double Takes column in the mid-80s, he was rumbled almost immediately as 'Heurtebise,' and the true authorship of the Roland Barthes-accredited April Fool, 'The Nautilus and the Nursery,' was also never seriously in doubt."﻿