Patricio Guzmán's Nostalgia for the Light won Best Feature at the International Documentary Association's Awards ceremony in Los Angeles last night. The LA Times' Susan King: "Set in northern Chile's Atacama Desert, the documentary juxtaposes scenes of astronomers in observatories scanning the galaxies, while nearby, archaeologists and elderly women dig through the sand searching for the human remains of pre-Columbian mummies, 19th century miners who labored in slave conditions and the bodies of victims of Gen Augusto Pinochet's regime who were taken to the Atacama as political prisoners and dumped there." Michael Guillén interviewed Guzmán in October 2010.

TheWrap's Steve Pond notes that neither Nostalgia nor any of the other docs nominated for the IDA's top award — Better This World, How to Die in Oregon, The Redemption of General Butt Naked and The Tiniest Place — have made the Academy's shortlist of 15 films left in the race for the Best Documentary Feature Oscar.

Pond: "Les Blank was presented with a Career Achievement Award by director Werner Herzog, who said Blank's work was 'always defining America, in a way.' (Blank responded with a story about Herzog's wild-man ways while filming Fitzcarraldo, which Blank documented in his film Burden of Dreams.) Hell and Back Again director Danfung Dennis was given the Jacqueline Donnet Emerging Filmmaker Award."

Anne Thompson reports that the Producers Guild of America has announced its five nominees for best documentary, two of which — James Marsh's Project Nim and Richard Press's Bill Cunningham New York — are on Oscar's shortlist. The other three: Michael Rapaport's Beats, Rhymes & Life: The Travels of A Tribe Called Quest, Asif Kapadia's Senna and Cameron Crowe's The Union.

"Two Italian documentaries about Benito Mussolini, both unspooling at the Turin Film Festival, are creating a stir in Italy due to some blatant analogies with a certain contempo leader that they serve up," reports Nick Vivarelli in Variety. "Mussolini's Body, by Fabrizio Laurenti, is 'a voyage into the obsession Italians have with their leaders' bodies,' says Laurenti…. The other hot-button Mussolini doc is The Boss' Smile by Marco Bechis (Garage Olimpo), about Mussolini's charisma and media savvy. 'I didn't want to create direct links with the present,' Bechis said at the Turin presser. 'But the continuity between that past and our present just became screamingly evident.'"﻿

Besides Khodorovsky and Under Control, other docs currently in theaters are The Big Fix, Grandma, a Thousand Times and Under Fire: Journalists in Combat.

"Beginning as a nose-to-the-ground investigation into the aftermath of the Deepwater Horizon oil spill, Josh Tickell and Rebecca Harrell Tickell’s doc expands into a damning indictment of the government-lobbyist revolving door, the campaign finance system and corporate capitalism in general," writes Andrew Schenker in Time Out New York. "But for all its connect-the-dots mapping and damning narration, The Big Fix hardly provides the viewer with any information not easily gleaned from even a cursory glance through the left-wing blogosphere; it’s more a summarizing project than an act of investigative journalism or a revelatory indictment."

On the other hand, Ernest Hardy in the Voice: "By doing smart, covert reporting that shames our news media, by interviewing uncensored journalists, by speaking with locals whose health has been destroyed, and by interviewing scientists who haven't been bought by BP (many have, as the film illustrates), Fix stretches into a mandatory-viewing critique of widespread government corruption."

"Every year sees the release of documentaries about their filmmakers' families that were made on miniscule budgets, but few are as satisfying as Grandma, A Thousand Times," writes Chuck Bowen in Slant. "The film has been crafted with a deceptive simplicity; achieving a tone so steady and confident that it could be taken for granted, as there isn't any of the naked striving for profundity or pathos that can strike one, at best, as ham-handed and desperate or, at worst, mean and exploitive. The film is somehow tough and nostalgic at once and in equal measure, and in that fashion it recalls such Olivier Assayas films as Late August, Early September and Summer Hours."

Aaron Hillis in the Voice: "From her rundown balcony a few flights above the streets of old Beirut, illiterate but sharp-tongued octogenarian Teta Fatima observes the bustle, haggles with vendors over the price of potatoes (ultimately making transactions via bucket and rope), and habitually drinks coffee while smoking an arguileh (hookah). She might not be our kin, but filmmaker Mahmoud Kaabour's anecdotal, warm-humored tribute to his grandmother — and, to a limited extent, to her cultural heritage — taps into the universal desire to hang onto loved ones in their waning years." 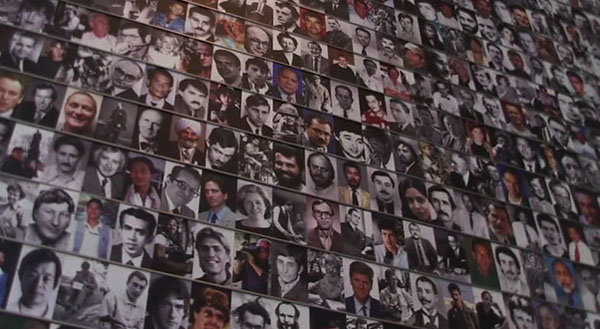 "An appreciation for news-gathering in extreme conditions, Martyn Burke's documentary Under Fire: Journalists in Combat brings a heightened sense of psychological cost to the work of war correspondents, whose jobs have become increasingly dangerous," writes Robert Abele in the Los Angeles Times.

Andrew Schenker in Slant: "Built around a series of interviews with journalists active and retired as well as a smattering of the footage that they shot, Burke's film unfolds a gallery of shell-shocked newspapermen and women, many of them suffering PTSD-induced nightmares, an inability to sustain human relationships, and a sense of guilt both over their fallen colleagues and the fact that they require death and suffering to make their living. Under Fire never sidesteps the thorny issues of a journalist's ethical responsibility — using as a particularly incisive case a photographer's famous still of a starving boy in an African refugee camp who he chose not to help — and features no shortage of gripping, anguished testimonials from its subjects…. And yet, by confining his focus strictly to the journalists, Burke tends to place an undue emphasis on first-world psychological suffering to the detriment of the genuine physical misery being undergone by these reporters' subjects."

In the Voice, Ernest Hardy finds that little "in the film is actually surprising, but it's still fascinating and often devastating."

For news and tips throughout the day every day, follow @thedailyMUBI on Twitter and/or the RSS feed.﻿﻿﻿﻿﻿﻿﻿﻿﻿﻿﻿﻿﻿﻿