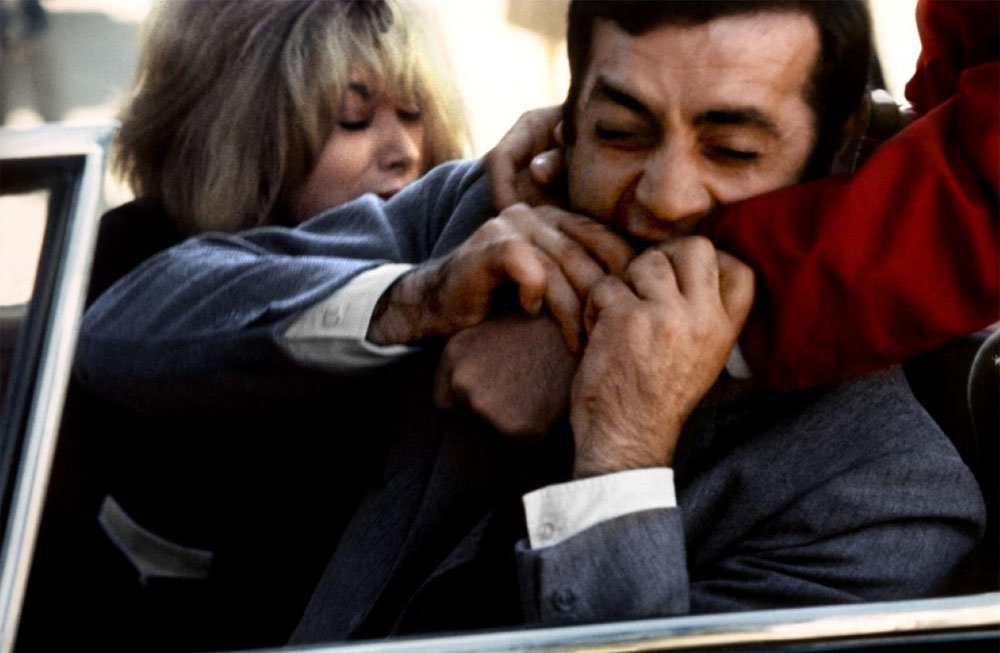 Jean-Luc Godard changed the course of film history with his debut Breathless (1960) and then again when he capped an unprecedented seven-year run with his 14th feature, Weekend," writes J Hoberman in the Voice. "Less an individual movie than the culmination of a process we might call the Godardification of cinema, Weekend was first shown here at the 1968 New York Film Festival and opened immediately thereafter at an Upper East Side movie house with an ad that paraphrased the French student radicals of the previous May: 'IMAGINATION IS SEIZING POWER!' This apocalyptic farce — Alice in Wonderland as reconceived by the Marquis de Sade — would mark both the high point and the end of Godard's meteoric career as a popular artist."

It was "the self-proclaimed 'end of cinema,'" writes the L's Mark Asch, "which was also, ironically, his most cinematographically sophisticated film to date. Though a hitchhiker called the Exterminating Angel warns of a coming age of 'flamboyance' in the cinema, Godard, along with cinematographer Raoul Coutard, demonstrates a technical proficiency to match the mass-produced bourgeois culture whose casual brutality he so callously savages: when Coutard pans for minutes at a time alongside an epic traffic jam, the joke is less about the fender-benders and chess-playing stalled drivers, than in the oppressive bleat of car horns, and the simple audacious duration of a moment rare in the Nouvelle Vague: the exactingly choreographed long take."

"Having hatched a scheme to commit a murder or two for profit," writes Charles H Meyer Cinespect, "Corinne [Mireille Darc] and Roland Durand [Jean Yanne] set off on the road in their nihilistically black convertible but are immediately waylaid by a seemingly endless traffic jam, sporadic car accidents, wandering historical and literary figures, and various revolutionaries as well armed with words as they are with guns…. Over the course of Week End, as French society collapses like a war-battered country being struck not by bombs but by the corrosive, corrupting forces of capitalism, so collapses the film's original narrative, which the increasingly radicalized proletariat commandeer away from the murderously money-grubbing Durands as Godard turns his film into an extended lecture on Marxist revolutionary theory."

Keith Uhlich in Time Out New York: "The satire may be scattershot — 1972's Tout va bien is a more potent attack on plutocratic values — but you'll still be unsettled in all the right ways. As long as cinema like this exists, there's no end in sight."

A new 35mm print is screening at Film Forum in New York through October 20.

Update: Criterion asks Steve Chow about the new poster he's designed for Weekend, the one that caught Adrian Curry's eye a couple of weeks ago.﻿

Update, 10/15: "Weekend is the closest thing to a Chabrol film that Godard ever made," writes the New Yorker's Richard Brody. "It's a fliply comic scorched-earth rejection of the allure and gloss of modern life — yet, unlike Chabrol's caustic rejection of the moralism and piety that goes with it, the free fall with which Godard's film ends is cushioned by the all-enveloping, all-purifying orthodoxies of extreme leftism, of nominal Maoism. A scene late in the film, featuring an African laborer endorsing, in the presence of the movie's wandering couple, revolutionary violence, is a virtual sermon; it's the one scene in the film that offers neither directorial flourishes nor cartoonish exaggeration. And, for Godard, it was the wave of the future — of his future."﻿