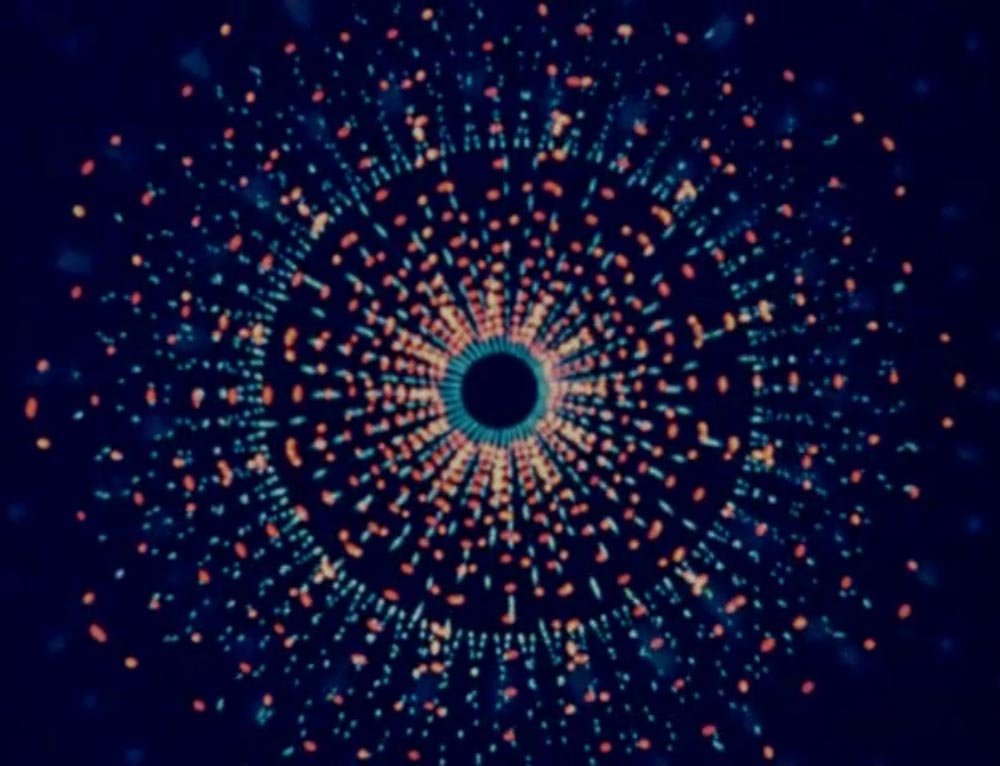 Sadly, the Center for Visual Music confirms the news many of us first heard from Jacob W. when he responded to yesterday's entry: "George Kuchar and Jordan Belson on the same day, yet another enormous blow…" CVM, which released the DVD Jordan Belson: 5 Essential Films in 2007 and offers further research material at its site, notes that Belson "died peacefully early Tuesday morning, September 6, at his home in San Francisco, of heart failure. He was 85. A memorial screening is planned for October 19 in the San Francisco Bay Area, plus tribute screenings in several other cities later this fall. Details will follow soon."

Last year, Cindy Keefer, archivist and curator at CVM, wrote for SFMOMA, "Jordan Belson is an enigma and a legend of the experimental film world. He has produced a remarkable body of over 33 abstract films over six decades, richly woven with cosmological imagery, exploring consciousness, transcendence, and the nature of light itself. His films have been called 'cosmic cinema,' and the imagery is not terrestrial — it is of skies, galaxies, halos, suns, stars, auroras. He works with a vocabulary of film images he's created since the 1940s, but does not use computers. He withdrew his films from distribution decades ago, thus many are difficult to see. Belson doesn't give interviews, write about his work, or discuss his methods, leaving the viewer to derive his/her own experiences and meanings from his films. He states, 'The films are not meant to be explained, analyzed, or understood. They are more experiential, more like listening to music.'"

"Jordan Belson studied painting before seeing Oskar Fischinger and the Whitney brothers' films at the 1946 Art in Cinema festival at the San Francisco Museum, whereupon he increasingly devoted himself to the moving abstract image," wrote William Moritz in 1997. "His early films animated real objects (pavements in Bop-Scotch [1952]) and scroll paintings prepared like film strips with successive images (Mandala [1953])﻿.... Between 1957 and 1959, Belson collaborated with composer Henry Jacobs on the historic Vortex Concerts, which combined the latest electronic music with moving visual abstractions projected on the dome of Morrison Planetarium in San Francisco (and also the Brussels World Fair in 1958)…. The second major well-spring of Belson's mature films arose from his increasing involvement with mystical and contemplative philosophies."

"Belson exhibited large scale artworks at the Guggenheim Museum in the late 1940s," wrote Ying Tan in 1999. "For a few years he was among those artists supported by Hilla Rebay, the founding director of the Guggenheim Museum in New York. Although most people only know him as a filmmaker, Belson has never stopped painting, even when he was no longer making films composed of animated paintings and drawings. To Belson, his films and graphic art mirror each other: they are all about sacred art, about a spiritual quest."

Update, 9/11: "He was, at bottom, an illuminator, relentlessly exploring viewers' perception of the play of light on the screen," writes Margolit Fox in the New York Times. "His films have a haunting, evanescent beauty: seeing them is like watching patterns formed by floating watercolors or clouds of ink."﻿

Image: Still from Allures (1961), 16mm film by Jordan Belson. © Jordan Belson, courtesy Center for Visual Music.﻿ For news and tips throughout the day every day, follow @thedailyMUBI on Twitter and/or the RSS feed.﻿