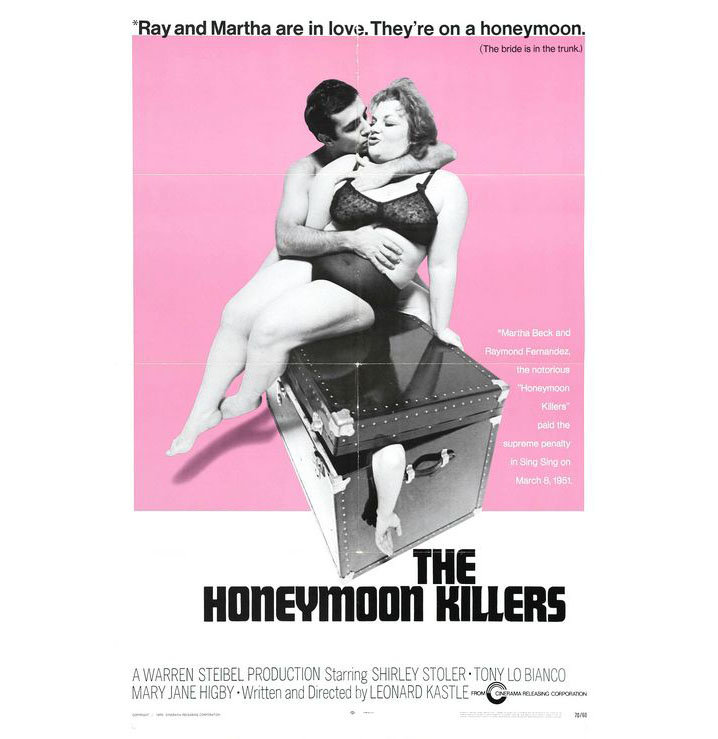 "Leonard Kastle, writer-director of 1969 film The Honeymoon Killers, which became a cult classic, died May 18 in Westerlo, NY," reports Carmel Dagan in Variety. "He was 82. The Honeymoon Killers starred Shirley Stoler and Tony Lo Bianco in the true story of notorious 'lonely hearts killers' Martha Beck and Ray Hernandez, who lured a series of lovelorn women, robbed them and murdered them in the late 1940s." He also notes, as everyone must, that "François Truffaut called it 'his favorite American film.'"

"Leonard Kastle seized the tabloid case of plug-ugly criminals as a rebuke to Bonnie and Clyde's sham lyricism, and his vehement denunciation of 'beautiful' shots — more Frederick Wiseman than Diane Arbus — is bracing." Fernando F Croce: "Kastle is a born filmmaker with an uncanny feeling for the startling close-up and the excruciating long-take, Edgar G Ulmer would have applauded his mise en scène of light bulbs and cellar burials."

Kastle was also an opera composer and librettist as well as the winner of the first prize in the Leschetitsky Piano Competition (1948), a Baxter Prize for choral composition (1963), an NEA grant (1974), and two Meet-the-Composer grants (1981 and 1985). You can read more about his career as a musician at the University at Albany.

Update, 5/23: "He was a brilliant, spiritual man who graciously let my colleagues Abbey and Robert, myself, and a film crew into his home in 2003 for the interview that appears in our release of his film," writes Criterion's Susan Arosteguy. "He spent a few hours with us and gave possibly the longest interview ever about his musical career and single foray into filmmaking." She also presents a "video clip from 2003, in which Leonard Kastle talks about directing The Honeymoon Killers and working with the film's lead actress, Shirley Stoler" and which "is a tribute to the man's vision and sensitivity."