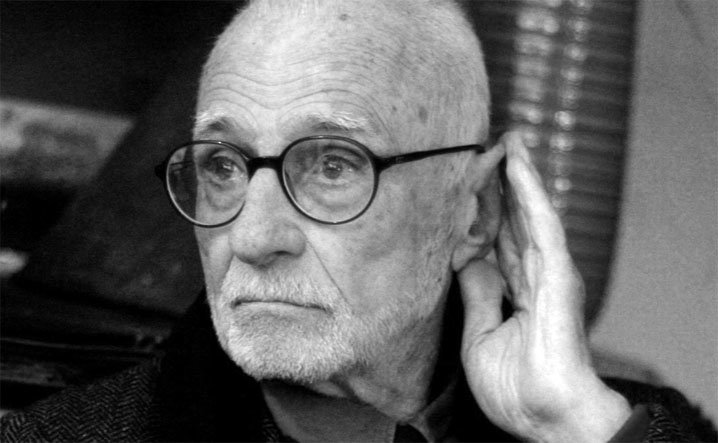 "Oscar-nominated director and screenwriter Mario Monicelli, considered one of the fathers of the Italian comedy of the 1940s-1960s, died Monday after jumping from a fifth-story hospital window," reports the AP. "He was 95. Monicelli was being treated at Rome's San Giovanni hospital for pancreatic problems and leaped to his death Monday night, said Anna Scoltore, who heads the hospital's media office. She said he had been admitted a few days ago and that it appeared his condition was terminal."

From the Reuters story: "He made his first short film when he was 19 and made his directorial debut in 1949 by directing the Italian comic genius Totò, a partnership that would help make them both famous. He directed some of post-war Italy's greatest actors, including Marcello Mastroianni, Sophia Loren, Vittorio Gassman, Alberto Sordi, Anna Magnani and Monica Vitti."

CBC News: "Monicelli got Oscar nominations for best foreign film for Casanova 70 in 1965, about the amorous adventures of an army officer, and I Compagni (The Organizer) in 1963, about exploited textile factory workers in Turin, Italy. He won a Golden Lion for lifetime achievement from the Venice Film Festival in 1991, more than 40 years after his The Great War won the prize at the festival.... His I soliti ignoti (Big Deal on Madonna Street) of 1958 stars the comedic actor Totò, and marks the comedy debuts of both Vittorio Gassman and Marcello Mastroianni."

Monsters and Critics: "In 2006 he directed his last feature film, Roses of the Desert. The screenplay included a contribution by acclaimed Italian screenwriter Suso Cecchi D'Amico. Paying homage to Cecchi D'Amico who died aged 96 in July, Monicelli said: 'Her passing leaves me feeling very lonely, but we have to bend to the passing years.'"

Ilaria Lacommare profiled Monicelli for Café Babel in 2008, when he told her, "The commedia all'italiana is comedy which does not solely deal with customs. It is a light exchange between the characters, and it hinges on life and current events. Therefore the more regional it is, the more it becomes international, because it relies on universal factors."

Updates, 11/30: "Beyond its humor, Monicelli's work combined comedy with serious social criticism of the difficulties faced by an Italian society that had been traumatized by wars and the Fascist movement," writes Michael Roston in the New York Times. "His influence was also felt in American cinema. Several directors have have produced work inspired by Big Deal on Madonna Street, including Woody Allen's Small Time Crooks, Louis Malle's Crackers, Alan Taylor's Palookaville and the Russo Brothers' Welcome to Collinwood."

"Monicelli was a particular critic of the policies of the Italian prime minister, Silvio Berlusconi, and what he called the 'get-rich culture,'" notes Ben Child in the Guardian. "He worked on a documentary about the protest-hit G8 summit in Genoa in 2001 and in June called on students to rise up against plans by Berlusconi's right-wing coalition government to reduce Italy's culture budget."

"After directing the emerging comic star Alberto Sordi in a semi-dramatic role in Un Eroe dei Nostri Tempi (A Hero of Our Times, 1955), Monicelli began an ideal partnership with the scriptwriters Agenore Incrocci (known as Age) and Furio Scarpelli that was to last most of his career," writes John Francis Lane in the Guardian. "They were co-authors, with Monicelli, of the original story and screenplay for I Soliti Ignoti.... Monicelli then had the intuition to pair Gassman with Sordi in La Grande Guerra (The Great War, 1959), produced by Dino De Laurentiis. They were cast as rascally, down-at-heel soldiers in the first world war who turn into reluctant heroes when they are captured by the Austrians. The ironic treatment of military traditions angered some, but audiences generally loved the film and it was the joint winner of the Golden Lion at the Venice film festival in 1959.... Monicelli remained prolific after his 70th birthday, directing one of his best later films, Speriamo che sia Femmina (Let's Hope It's a Girl, 1986), a story of feminist solidarity in a radiant Tuscan setting.... He had been sceptical about the new generation of Italian comedian-auteurs such as Nanni Moretti and Roberto Benigni, but began to feel more kindly towards them when they turned their irony against Berlusconi. Monicelli, who was always a leftist, thanked Berlusconi 'for making me feel young again by joining in protests against he who has all the makings of a modern tyrant.'"