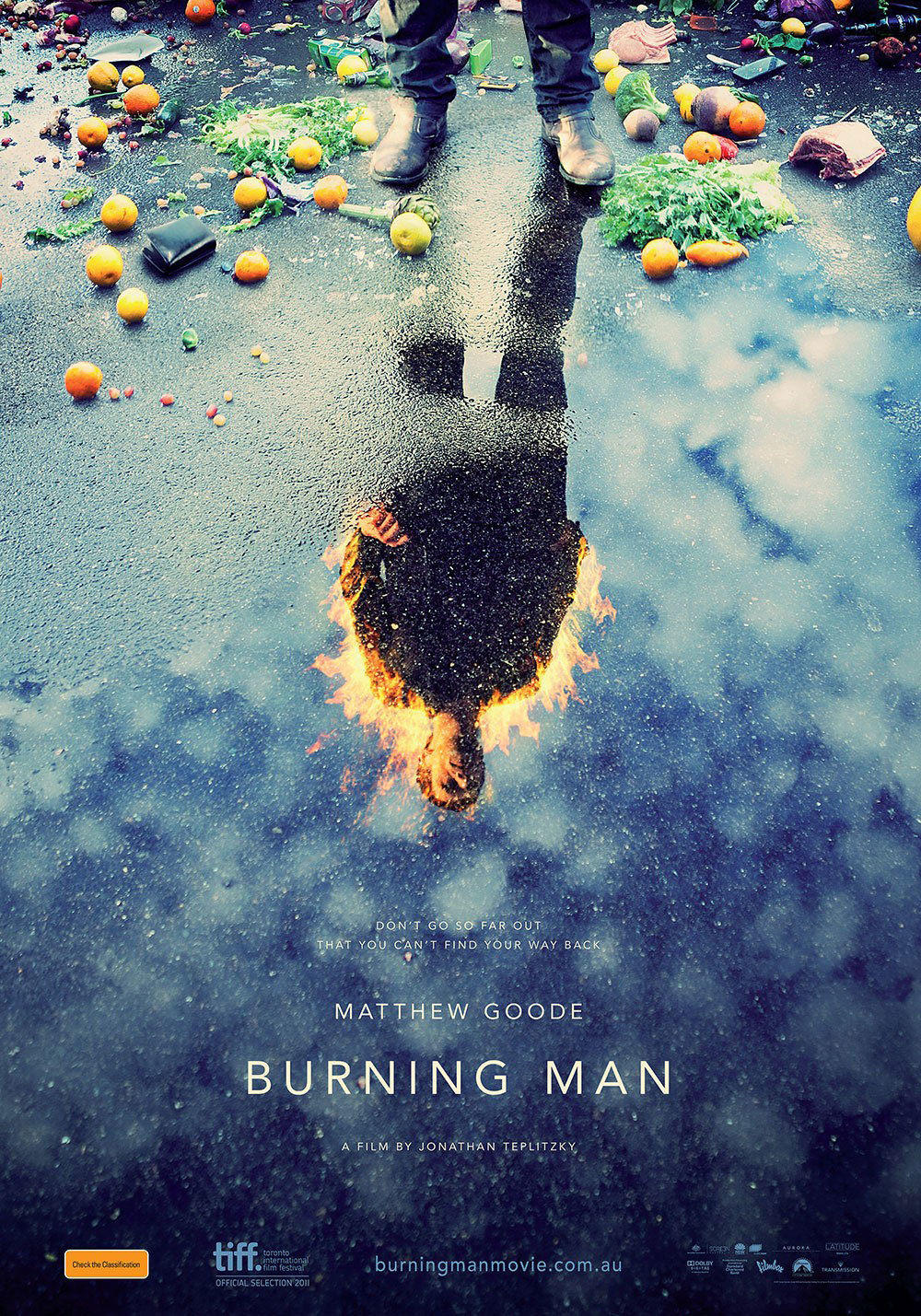 As soon as I saw this poster (for a film I’d never heard of) I fell in love with it, and so I wasn’t surprised to discover that it was designed by Jeremy Saunders whose posters I’ve featured a number of times before. British-born, but based in Australia, Saunders designed the best poster for Lars Von Trier’s Antichrist as well as a superb Fish Tank poster (in my Top Ten of 2010). I also loved his illustration and hand-lettering for the short film Bear which can be seen in my Cannes round-up this year.

What I love about the poster, beyond its gorgeous color scheme of blues and yellows, and its superb sense of composition (the inverted pyramid of yellow pointing down to a triangle of nicely minimal text) is that it knocks you a little off balance. First of all there’s Matthew Goode upside down (which makes you twist your neck) and on fire (is this a Nic Cage film?) — but, wait, are those lemons strewn around his feet? Is that cilantro? Something’s going on here and you have no idea what, but it sucks you in. It turns out that “Burning Man is the reckless, sexy, funny, moving and ultimately life-affirming story of Tom, a British chef in a Bondi restaurant, who seems to have decided there are no longer any rules he needs to obey.” I like that the poster gives you a hint of that (once you know, it all kind of makes sense) but doesn’t feel the need to explain itself.

I’m not a big fan of overly Photoshopped posters, but Saunders has a deft touch. Cloudscapes are so overdone as movie poster backgrounds these days, but Saunders’ reflected sky, with its soft, out of focus clouds falling out of that hard wet concrete, is lovely.

I was so intrigued by the poster (which it turns out is actually the teaser poster) that I wrote to Jeremy to find out more about it. The result was a fascinating insight into the poster designer’s process as well as his thoughts on where movie marketing is heading.

“I’ve known the writer and director Jonathan Teplitzky for a few years now; we did the not-particularly-subtle Cul-De-Sac homage for Gettin’ Square together [you can see the Polish original he’s referring to here]. Burning Man is a really important story for him to tell and I was thrilled that he’d been able to finally make it, and to have the opportunity to be involved in helping him introduce it to people. Which sounds like PR speak but for once it’s actually true...

“I did a bunch of rough designs for the AFM last October, and during that process myself, the producers and the distributors were all in steadfast agreement that the artwork should avoid having any kind of literal image of a burning man, as it would be trite and reductive. (Consequently both the teaser and the theatrical artworks feature literal images of a burning man.)

“I met with everyone again in April and was presented with a few directions they wanted me to try out. This happens quite a lot and you feel a bit like a monkey with a Wacom rather than a Very Special Artist, but after a year of having pretty much every good design I’ve done rejected, sometimes it’s nice to have a hand-hold through the dark woods. So I ploughed on with those.

“The year’s been pretty tough and I was dog tired and feeling hugely unenthusiastic about my career choice. I was completely spent and over the whole thing. Just burnt out. And that was definitely coming through in the work. Jonathan came around for a cup of tea on the porch and gently suggested (or as gently as Jonathan can suggest anything, he was a PE teacher earlier in his life and it kind of carries over) I completely ignore every brief I’d been given and go my own way (‘Just fucking tear it up, mate’). Which was a rallying cry if ever there was one. Now I just had to try to summon up an idea.

“So I was desperately looking through the stills for inspiration and saw a few (taken by Lisa Tomasetti) of Matthew Goode and Jonathan talking, reflected in the puddle, that for some reason I’d just ignored and was suddenly very taken with them. The strewn foods are from a car crash scene, and it helps to reflect (no pun intended) that Tom’s life is out of control. Plus, you know, he’s a chef, so there’s that.

“So I tried to combine both the elements and after a bit of 3d jiggery-pokery to get the angles right it all fell together. After that it was just ten minutes setting him on fire in Photoshop. The lemons etc are pretty much all from a series of shots taken during the shoot, but to say any more would be doing a disservice to the movie. Suffice to say any stills photographer who spends idle moments taking images of production design and empty sets is worth their weight in gold.﻿

“I read some internet concern about the tiny type but if it makes people slow down to try and read it, they read it. We see more images before breakfast every day than people 100 years ago saw in their entire lives, so to make people take notice of one in particular is a huge challenge. And I find it’s more pleasant to do that by being quieter rather than louder. Which follows through to the title treatment, or rather the lack of one. I don’t really like title treatments for anything other than, you know, franchise movies. And I really dislike credit blocks, which are only important to the people on the credit blocks, and maybe their mums. So it was nice to do neither for this piece.

“I’m really pleased with it, more for what it doesn’t say about the movie than what it does. There was some kerfuffle about ‘not selling the love story’ and there were some noises made about Matthew Goode’s head not being ten times the size (and the right way up). But the trailer has all that covered, and the key art is just a signpost to the rest of the campaign.

“It’s still ‘key art’ — the key image to hang the rest of the campaign on — but in the last ten years the movie poster’s job has changed substantially; I’m sure there are people out there who will argue that key art has a quantifiable effect on box office, but I suspect they are either deluded or trying to justify their wages. Up to 10 years ago it did, when the only place you could easily see a trailer was in the theatre — but nowadays trailers and reviews are all just one click away, and they will always be far better at demonstrating the scope of the film than a single image is. However, I think the opportunity for us as key artists then becomes far more interesting: we’re freed from the demands of telling the story and introducing the characters and instead we have this new scope to create images away from actors’ heads and lame marketing box-ticking exercises and more to compelling pieces that arrest the (right) viewer’s attention and encourage them to investigate further. Which is really liberating. I will concede that we’re not quite there yet, it’s a bit of a no-man’s land at the moment, but I think in the near future it’s going to be a vastly more interesting place to hang out. At least I hope so.”

I asked Jeremy what posters he has liked recently and he mentioned the new poster for Martha Marcy May Marlene which I also like a lot, “such a beautiful image layout, really simple and so gorgeous even the terrible type can’t spoil it. There isn’t much key art that I’d put on my wall, but that’s one.” He also added, “Of course, the Drive key art is the exception to my title treatment rule — the cursive pink font is just excellent. I saw it and laughed out loud at its audacity, it’s perfect. I wish I’d thought of it.”

Burning Man is currently screening at the Toronto Film Festival, ﻿and you can watch the trailer here.﻿

You can see much more of Jeremy’s work and read his blog, at his website.