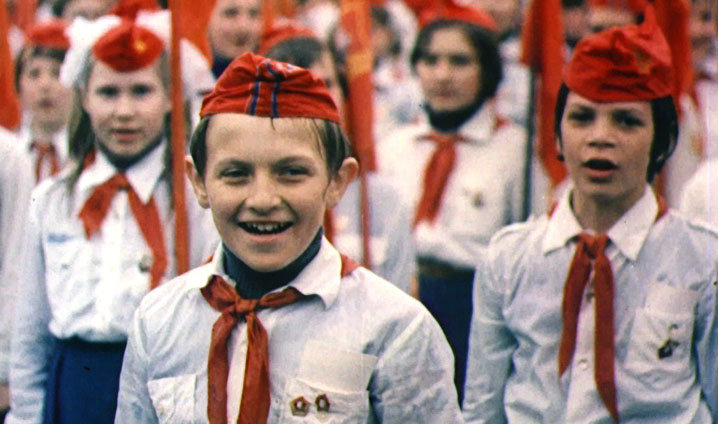 "If you're under the impression that post-Soviet Russia is a Wild West peopled at one extreme by gold-chained Mafiosi and at the other by starving babushkas hawking single daffodils in the Moscow subway, you may want to treat yourself to a riveting new documentary by New York-based filmmaker Robin Hessman," writes Ella Taylor, introducing her interview for NPR. "My Perestroika is an intimate portrait of five middle-class Moscow schoolmates. All of them were raised as upstanding Communist youth. All of them came of age with glasnost, and all of them — closing in on middle age today — piece together more or less viable lives under Vladimir Putin's queasy democracy, 20 years after the failed coup that led to the collapse of Soviet rule."

"The subjects, plainspoken and insightful, attempt to extract the objective lessons of the political past from their subjective fortunes," writes Nick Pinkerton in the Voice. "This struggling to untie the personal-political knot makes for compelling oral history, even as Hessman occasionally overreaches to create anti-capitalist anxiety."

Each interviewee "describes what it was like to grow up indoctrinated with a rigid ideology, then see that ideology crumble before their eyes," writes Nathan Rabin at the AV Club. "Hessman supplements their memories with home movies and Soviet-era newsreels, giving a glimpse of a semi-totalitarian state where people lived lives not too far removed from our own, with school, jobs, families, dating, and teenage rebellion between the regular rounds of enforced public service… My Perestroika is fairly foursquare as documentary filmmaking goes; it isn't stylistically snazzy, nor doggedly vérité. Its closest kin in the genre is Michael Apted's Up films, which are similarly focused on how people change over time. The difference is that My Perestroika is also about how a country changes."

The Boston Underground Film Festival opens tonight with Hobo with a Shotgun and runs through Thursday. Mike Everleth has the lineup while the Phoenix's Peter Keough preview three of the festival's 19 features: Adam Wingard's A Horrible Way to Die "won't disappoint aficionados of the genre. But it also offers elements of atmosphere, characterization, and narrative complexity that elevate it well above the usual slasher fare." Albert Birney and Jon Moses's The Beast Pageant "draws on a Surrealist tradition running from Un chien andalou to the works of such current practitioners as Jan Svankmayer, the Brothers Quay, and Guy Maddin." And Profane: "In the best underground tradition, [Usama] Alshaibi — who recently was savagely beaten in an anti-Arab hate crime — demonstrates that true reverence sometimes requires transgression."

"San Francisco's unique Disposable Film Festival (DFF) was created in 2007 by Eric Slatkin and Carlton Evans to celebrate the artistic potential of disposable video: short films made on non-professional devices such as one-time use video cameras, cell phones, point and shoot cameras, webcams, computer screen capture software, and other readily available video capture devices." Michael Guillén has an overview and an interview with Evans.

In the UK, Kinoteka opens tonight with Jerzy Skolimowski's Essential Killing — see David Thomson's profile in the Guardian — and runs through April 13. Simon Jablonski previews this Polish Film Festival for Little White Lies while Henry Barnes fills Guardian readers in on the humor of Janusz Kondratiuk, who's being honored at the fest with a retrospective. The Borderlines Film Festival opens tomorrow and runs through April 10, "providing a rich and significant moviegoing opportunity across Herefordshire, Shropshire and Powys," as James Clarke puts it in his overview for Little White Lies.

"The cinema of Mikio Naruse is one of heartbreak but also one of indomitable poise." So begins Michael Koresky's essay accompanying the release of the latest set from Criterion's Eclipse series, Silent Naruse.

"With time Naruse became a great poet of stoicism and quiet despair," writes Dave Kehr in the New York Times. "These sentiments are present in his early films, but in latent form. What's most striking about Flunky, Work Hard (1931), Naruse's earliest surviving film, is how brash and jaunty much of it feels and how freewheeling its camerawork is… More experimental still is No Blood Relation (1932), an unvarnished melodrama with a script by Kogo Noda, Ozu's regular collaborator… The following two films, both from 1933, deal again with self-sacrificing women: an aging geisha whose son is ashamed of her (Apart From You), and a waterfront bar hostess (Every-Night Dreams) whose long-lost husband returns, complicating her efforts to care for her son. In both movies Naruse seems to be moving toward the sense of resigned, suppressed suffering that would shape his masterpieces."

"So many of the giants of Japanese documentary filmmaking are woefully under-represented on DVD here in North America," writes Chris MaGee at Toronto J-Film Pow-Wow. Now, though, Zakka Films is releasing four films by Noriaki Tsuchimoto: Minamata: The Victims and Their World (1973), On the Road: A Document (1964), Traces: The Kabul Museum 1988 and Another Afghanistan: Kabul Diary 1985. 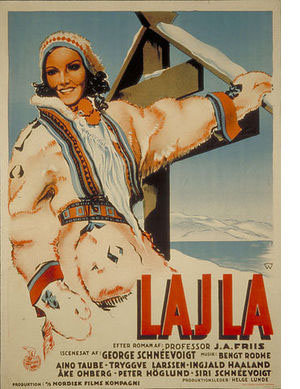 Luke McKernan: "Hot on the heels of the exciting news of Kino's Gaumont Treasures vol. 2 release comes what should be one of the silent feature film DVD releases of the year. Regulars will know that the Bioscope was mightily impressed by the Norwegian film Laila (1929) when it was shown at Pordenone in 2008. Now it is to be released by Flicker Alley on 11 April, and I can only say that every good silent home should have one. It's a bold move by the American label to release a silent that isn't a part of the canon and isn't covered in any film history outside of Scandanavia. But I think word of mouth is going to do the trick and justify their faith in the film."

Back to the Criterions, beginning with Edward Yang's Yi Yi (2000), which is out on Blu-ray this week. Dennis Lim in the Los Angeles Times: "Along with Hou Hsiao-Hsien, Yang was a central figure in the New Taiwanese Cinema that emerged in the 1980s, and to those familiar with his earlier films, many of which approached the contradictions of Taiwanese life and history with a mordant humor and anger, the serenity of Yi Yi might have suggested the softening of age. But the film has held up extremely well." Glenn Heath Jr in Slant: "It's a testament to Edward Yang's lasting influence on me personally that Yi Yi, his final completed project and lone entry for the decade, still stands as my favorite film of the aughts." More from Sarah Boslaugh in PopMatters.

"A truly great documentary, The Times of Harvey Milk (1984) has exceeded its original category with the passage of time," writes B Ruby Rich for Criterion. "It is now an archive, a political case study, urban geography, melodrama, and cathartic expiation, and has inspired both an opera and a theatrical feature, Gus Van Sant's Milk (2008). The Times of Harvey Milk is a dazzling exemplar of that defunct technology 16 mm celluloid, the predigital choice for all alternative documentary and feature movements in America. With its astute roundup of news clips, archival materials, and original footage, and careful casting of veterans of the era for context, all orchestrated to capture the emotions of such signal events as the candlelight procession on the night of the assassinations and the White Night riots on the day of the verdicts, The Times of Harvey Milk has become a film that defies any expiration date. It is the rare documentary that speaks to our time, its own, and the intervening years with equal fluency."

Alexander Olch's The Windmill Movie (2009) is "a strange and fascinating artifact," writes Josef Braun, "a memoir by proxy, an 80-minute essay constructed from some 200 hours of material shot or collected by Richard P Rogers with the vague intention of being either a self-portrait or a critique of the culture that spawned him. Maybe, inevitably, both." Out from Zeitgeist.