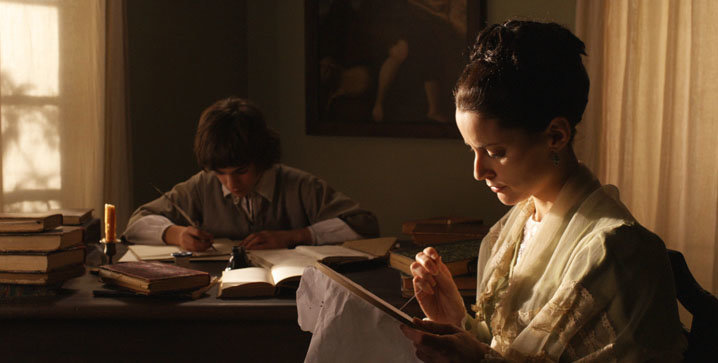 "Fresh from its world premiere at the Toronto International Film Festival in September, [Raúl Ruiz's Mysteries of Lisbon] is being shown just once, on Sunday, and doesn't have a distributor, so buy a ticket and grab some snacks," advises Manohla Dargis in the New York Times. You'd have to be quick about it, too. That showing begins shortly. "[T]he movie runs a daunting if easy-to-take 272 minutes. Based on a 19th-century Portuguese novel by Camilo Castelo Branco, it was partly produced for television and shot in digital, but is eminently cinematic whether watched on the big screen or small. The dizzying plot centers on a teenage boy, who, through many stories, intrigues and flashbacks within flashbacks, unlocks the secret of his patrimony."

"Raúl Ruiz is a filmmaker of labyrinths," writes Fernando F Croce in Slant. "A marvelously elastic storyteller, a dry wit, and a Rivettean anti-determinist, the Chilean auteur is fascinated by narratives that dilate from within, images seemingly full of secret passageways, and fabulists who collect tales like toys. In that sense, the ideal Ruiz project is his often sublime 1999 visualization of Time Regained, where Proust's themes of slippery memory weren't so much adapted for the screen as used as the flame which kept the director's own magic-lantern show reshaping itself over and over. Similarly adapted from a literary sprawler, Mysteries of Lisbon only occasionally hits the earlier film's levels of boldness, yet it nevertheless finds Ruiz in plangent form, offering a sumptuous and fluid work that, at its best, gives the elating impression of flipping through a book as the pages evaporate into smoke."

Glenn Kenny explains his tweeted summary, "'The Saragossa Manuscript + Great Expectations x Judex=Mysteries of Lisbon.' As in Dickens, this tale begins with a rather poor orphan (although it's worth noting that while this particular tale is full of characters of low fortune, or who are about to be deprived of what fortunes they may have, there is not much in the way of depictions of privation here) of obscure origins; like the ever mind-blowing Manuscript, it has a story-within-a-story-and-look!-over-there-another-story structure that creates a sometimes vertiginously 'reality, what does it mean?' effect on the viewer. As for Judex, that's a little harder to quantify. There's no real nefarious-crime element to the narrative, but once a black-clad young noblewoman played by the estimably beautiful Clotilde Hesme turns up, the intimations are palpable. I was reminded of Elie Faure's description of Vigo's L'Atalante, the memorable phrase 'fugitive shadows of Rembrandt;' fugitive shadows of Feuillade are cast throughout here."

"Though it may seem daunting, the size of the film is its chief pleasure," writes Michael Koresky in Reverse Shot. "There’s so much room to parry and maneuver, so many doors (some literal) to unlock, secrets and coincidences to be in thrall to. The story itself — initially concerning, Joao, a young boy living in an orphanage reunited with his mother by his priest caretaker and then spiraling out to encompass a grand and seemingly ever expanding cast of tight-knit characters — is one of immense contrivance, and Ruiz acknowledges and plays with that inescapable fact, constantly 'setting the scene' with winking theatrical grandeur.... For as convoluted as The Mysteries of Lisbon becomes — and that is hardly a negative value judgment — it is never without its essential clarity of vision (up to and including its simultaneously crystallizing and ambiguous conclusion) and Dickensian joy of narrative."

Similarly, Nelson Kim at Hammer to Nail: "In nearly every scene, Ruiz knowingly teases us by exaggerating the contrivances, coincidences, and bald-faced implausibilities of the plot and foregrounding the artifice involved in creating this fictional world — and yet, for all his postmodern gamesmanship, he somehow manages to make the whole thing utterly captivating on the level of old-fashioned, what-happens-next storytelling, like a magician showing us how he put his tricks together and enchanting us even more by doing so."

Kenji Fujishima at the House Next Door: "It's rare that one can say for a film that every single shot is a triumph of imagination and execution, but such is the case with Mysteries of Lisbon; even when you might find your attention wavering at certain points from the stories being told, Ruiz gives us something to marvel at in each shot."

Updates, 10/11: Miriam Bale for the L: "Though I admit a particular softspot for overlong, soap-operatic epics (especially w/ great costumes — and the billowy sleeves layered with grey linen smocks may be the most inspirationally offbeat thing in this film), the relationships between all the characters and how they relate to the themes of the film itself — despite the self-reflexive and humorous approach to this attempted omniscience — are too graphically drawn for my tastes. A film of this length should be a little more of a mess; I expect unresolved subplots and dissonant bit players (like the James Dean and Dennis Hopper characters in Giant, for instance.)"

"Mysteries of Lisbon is the director's career in 272-minute microcosm," writes Michael J Anderson. It "emerges as a new signature accomplishment, a masterpiece no doubt for the director, and also a worthy companion to Manoel de Oliveira's supreme masterwork culled from the same authorial source, Doomed Love (1978). There could be no greater compliment to Ruiz's latest than this."

Update, 10/12: "Ruiz's appetite for narrative is almost gluttonous," writes David Bordwell. "[H]e supposedly wrote over a hundred plays in six years, and he's made about as many films. He once told me that he thought that Postmodernism was simply a revival of the Baroque in modern dress. From Mysteries of Lisbon, it's clear that he sees in many older narrative traditions affinities with our tastes today. Network narratives? They've been done, and maybe better, centuries ago. Follow the lacy tendrils of classic family-origins plots, and you'll find a pattern as intricate as anything in Short Cuts or Pulp Fiction."