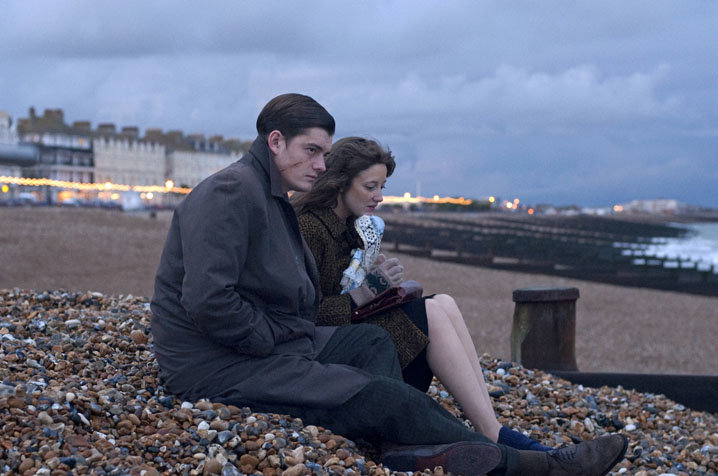 "Any remake of a much-loved film provokes outrage, which usually turns out to be justified," writes David Cox in the Guardian. "The Boulting brothers' 1947 version of Graham Greene's Brighton Rock is considered by some the best British film of all time. Martin Scorsese, Terrence Malick and even the Hughes brothers have all considered revisiting this hallowed ground, but then balked at the prospect. Worrying territory, then, for a first-time feature director. Rowan Joffe comes to the task armed with a best director Bafta for TV drama The Shooting of Thomas Hurndall and writing plaudits for Brit flicks 28 Weeks Later and Last Resort. Slim enough credentials you may think. Nonetheless, it is clear from the outset that he is quite ready to blaze his own trail."

"It's easier to think of Brighton Rock as a remix rather than a remake of the 1947 thriller that starred Richard Attenborough as an amoral gangster who must romance a witness to a murder he committed in order to keep her quiet," writes Stephen Saito, introducing his interview with Joffe for IFC.com.

Joffe "has a few tricks up his sleeve, the primary one being to update the action to 1964," writes Kaleem Aftab in the Independent. "The influence of 1960s-set Brighton biker movies such as Quadrophenia is strong both in the production design and the attitude of the principle protagonists, especially the women. Joffe uses the more modern context to make Rose a much stronger, less passive character. A breakthrough performance from Andrea Riseborough as the waitress who Pinkie decides to marry so that she won't be able to testify against him in a murder rap, implicates Rose as a more willing participant in the ruse."

"Despite its vibrant evocation of the English seaside town where Greene set his tale of reckless youth, sexual dysfunction and what he called 'the appalling strangeness of God's mercy,'" writes Justin Chang in Variety, "Joffe's first feature never shakes off the feel of a telepic with above-average production values, and its unsteady lead performances and often garish stylistic touches make a muddle of the source material's psychological acuity."

"Greene's examination of the tug of war between Ida and Pinkie over Rose's fate plays out as in the book," writes Ray Bennett in the Hollywood Reporter, "but the other characters are given short shrift. [Sam] Riley continues to grow as an actor but lacks the feral impact of the young Attenborough or Richard Widmark. Riseborough, her beauty made dowdy and winsome, captures with delicacy Rose's willingness to forsake heaven for the love of a wretched man. [Helen] Mirren makes Ida knowing and tough but also susceptible to the shy approach of the longtime friend played by [John] Hurt as a wounded soul."

"The film is beautifully shot by John Mathieson," writes Mark Adams in Screen, "and the recreation of the street battles between the Mods (on their scooters) and the leather-clad Rockers (on their motorbikes) is impressively staged, and does add a great deal to the sense of an England that seems genial and good-natured but that has violence bubbling away under the surface."

At Movieline, ST VanAirsdale talks with Joffe about his screenplay for Anton Corbijn's The American.