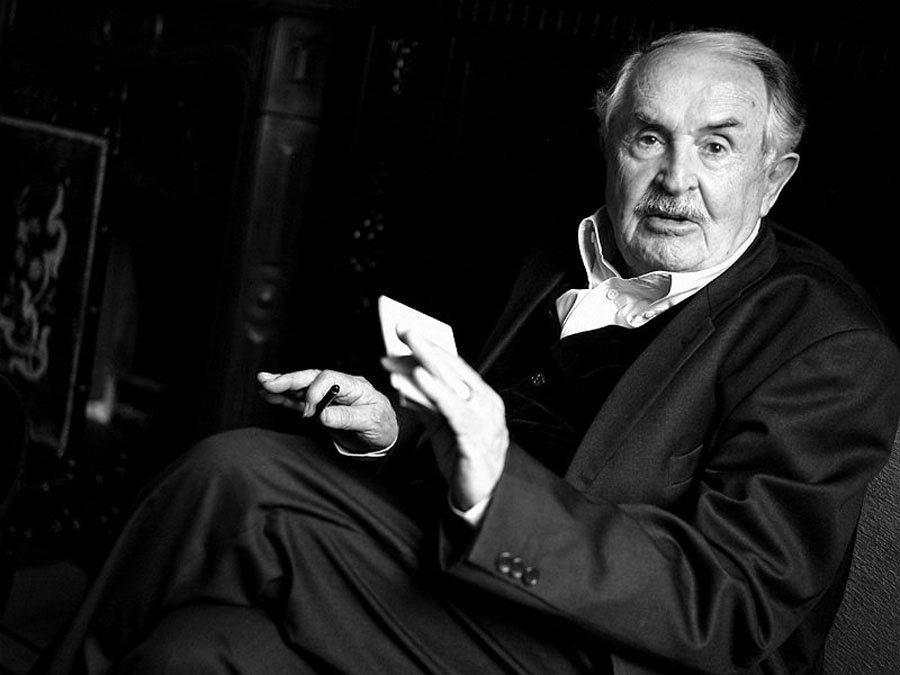 "Tonino Guerra, the poet and screenwriter from Emilia-Romagna who has worked with so many directors, died this morning," reports Camillo de Marco at Cineuropa. "He had turned 92 on March 16."

Even the honed-down list at Wikipedia﻿ of directors for whom Guerra wrote is rather astounding: "Michelangelo Antonioni with L'avventura, La notte, L'eclisse, Red Desert, Blow-Up, Zabriskie Point and Identification of a Woman, Federico Fellini with Amarcord, Theo Angelopoulos with Landscape in the Mist, Eternity and a Day and The Weeping Meadow, Andrei Tarkovsky with Nostalghia and Francesco Rosi with the militant politics of The Mattei Affair, Lucky Luciano and Illustrious Corpses."

All in all, he wrote more than 100 screenplays, was nominated for an Oscar three times (for Casanova '70, Blow-Up and Amarcord), won Best Screenplay at Cannes (for Angelopoulos's Voyage to Cythera) and the Pietro Bianchi Award at Venice, among many other prizes.

The Golden Apricot Film Festival Board has issued a statement: "We too loved this simple man who had a boundless zest for life. You could not help loving him. He not only dedicated himself to the cinema, the arts and poetry, but to everyone he met."﻿

Updates: Ray Pride's posted this clip from a documentary in the works:

Ray adds: "I once had a random conversation with Guerra at a film festival about his poetry, which I had discovered only a couple weeks earlier. He seemed pleased to be able to talk about that writing more than about the many directors he’d written screenplays with, including Angelopoulos, smoking a cigarette and glaring at the other end of a couch. (The poetry is written in his native dialect and much of it is scabrous.)"

And he follows up with this clip, Scene 3 from Voyage in Time (Tempo di Viaggio, 1983) in which Tarkovsky and Guerra are "Cooking Up Ideas":﻿

Cannes Film Festival president Gilles Jacob: "It is with great sadness that the Festival de Cannes has learned of the death of Tonino Guerra, one of the greatest Italian scriptwriters of all time. Be it the greatest films of Antonioni, the Taviani brothers, Tarkovsky, Rosi or above all Fellini and Theo Angelopoulos, it is sure that Tonino worked with them, illuminating their films with human simplicity and a poetic lyricism that is all the more moving since it is familiar to all. The Festival de Cannes, where numerous films written by Tonino have been selected, expresses its heartfelt condolences to his family. We are all deeply saddened by the loss of Tonino Guerra."﻿

"The Writers Guild of America West gave Guerra its Jean Renoir Award in 2011 for Screenwriting Achievement by an international writer," notes Anne Thompson. "At the time of the announcement, the WGA's Howard Rodman stated: 'By any standard one of the great writers of our times. His medium is the screenplay... Guerra's work is the brave and moral thread that runs through the fabric of modernist cinema. He is a breathtaking poet, a generous collaborator, and is possessed of the largest heart.'"﻿

"He first started writing poetry in dialect when interned in a prison camp in Germany, after being rounded up at the age of 22 with other antifascists from Santarcangelo," writes John Francis Lane in the Guardian. "To pass the time he told his companions stories: when he came home in 1945 he found a publisher for a book of them, I Scarabocc (Cockroaches, but also 'scribblings')." The came the move to Rome and the screenplays for Elio Petri, Antonioni, Vittorio de Sica, Rosi and, of course, Fellini. "Fellini wanted him to collaborate on City of Women, but at that time, the late 1970s, Tonino had fallen in love with Lora, the Russian woman who was to become his wife, and was commuting between Rome and Moscow. Guerra's 'Russian period' thus began." After Nostalghia, Guerra began working with Angelopoulos, "another director with whom he shared 'ideas on life and art.' Again, there was great chemistry between them, the Greek maintaining: 'Tonino has been my psychoanalyst for 20 years.'"﻿

Updates, 3/23: "In films such as La Notte and L'Eclisse as well as the aforementioned L'Avventura [Antonioni and Guerra] explored with an elegant yet pitiless look the inner corrosion of bourgeois values, their fetishist persistence, convincingly framing the elusive essence of impending social diseases." Celluloid Liberation Front in the New Statesman: "The sense of decline and dilated estrangement the films captured was doubtlessly due to Antonioni's aesthetic awareness but it was Guerra who wrote these rarefied stories of sentimental immobility and detachment. While steering through the existential aridity marking the affluence of the 'economic miracle' Italian style, he continued writing in his dialect delivering vernacular poetry from its parochial burden."﻿

"Most major film careers in Italy from the second half of the 20th century intersected at some point with Mr Guerra's," writes Dennis Lim in the New York Times. "In the second half of his career Mr Guerra's affiliations with Tarkovsky and Angelopoulos — who could be considered Antonioni's spiritual heirs — sealed his reputation as a writer with a questing, poetic sensibility, a hand-in-glove fit for directors who specialized in existential matters and the mysteries of interior life…. Mr Guerra was sometimes asked to reconcile his roles as poet and screenwriter. 'My poems were an essence of images,' he said in an interview when he was 80. 'They had the cinema inside them before I started working for it.'"﻿

From PJ Letofsky: "On Nov 10, 2009 I had the privilege of interviewing Tonino Guerra in Pennabilli, Italy, for my new documentary Tarkovsky: His God, His Devil. At the time he was already 90 years old but sharp, remembering his friendship with the revered Russian auteur director and their collaboration on Nostalghia. As this is one of the last interviews Tonino gave, I wanted to post it for his fans, honoring this great cinema poet by sharing his vitality and zest for life. The documentary, based on Tarkovsky's diary, is still a work in progress slated for release in 2013."﻿