"After the freshness and deceptive simplicity of their debut, the 2007 animated feature Persepolis, Marjane Satrapi and Vincent Paronnaud's Poulet aux Prunes — or Chicken with Plums — showing in competition here, is something of a disappointment," finds Movieline's Stephanie Zacharek. "The cast isn't the problem: The movie stars Mathieu Amalric as an embittered musician living in late-1950s Tehran, and Maria de Medeiros as his beleaguered but adoring wife; Chiara Mastroianni has a tiny part, and the fine Moroccan-born actor Jamel Debbouze appears in small dual roles. But the material just doesn't resonate, as Persepolis did."

Variety's Jay Weissberg disagrees: "Largely set in 1958 Tehran, the story, adapted from Satrapi's graphic novel, is a fail-safe tale of lost love leavened with panache, incorporating past and present with sweet and sour flavorings…. What Satrapi and Paronnaud have really achieved is an evocation of a lost world, much as they did in Persepolis. They've beautifully re-created the fiercely proud, Western-leaning life of the Persian middle class of the 1950s, all constructed in Berlin's Babelsberg studios with the kind of atmospheric quality of Fellini's Cinecitta-constructed Romagna (there's a nice visual homage to Fellini when Nasser Ali [Amalric] imagines being engulfed in Sophia Loren's outsized breasts). The side characters, such as Jamel Debbouze's two cameos, are lovingly constructed from the heightened haze of nostalgia, neither fully real nor fully cartoonish."

It's "pretty but ultimately empty," finds Lee Marshall in Screen. "Perhaps the core script problem lies in the graphic novel's premise and the film's central conceit. One day in 1958, Nasser Ali Khan (Amalric), a talented Iranian violinist, decides to take to his bed in the Tehran apartment that he shares with his schoolteacher wife Faringuisse (De Medeiros) and two small children Cyrus [Mathis Bour] and Lili [Enna Balland]. Life no longer holds any meaning for him, and he is determined simply to pine away until he dies. We watch him do so over the following eight days. However colorful these days are made by dreams of Nasser's past, present and future, many of them presented in seductive hyper-real or animated insets, they never really awaken our interest in a story whose end is revealed at the beginning, or a main character whose selfish gesture is never quite made okay by the fertility of his imagination." 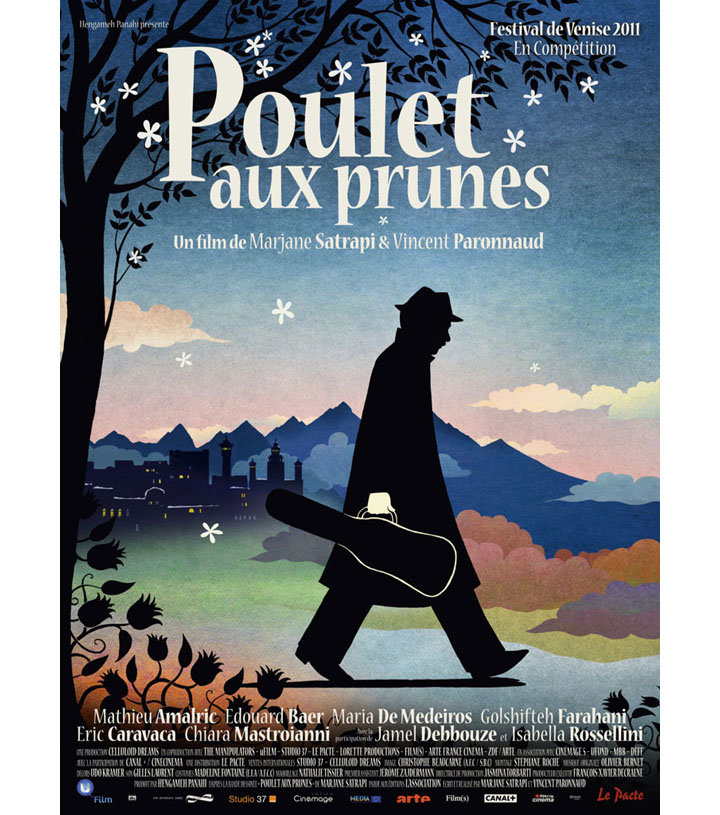 Back on the other hand, the Hollywood Reporter's Deborah Young finds it "winsome and sophisticated… The creativity of the artwork is fully matched by cinematographer Christophe Beaucarne's amusing lighting and Udo Kramer's magical sets."

"The digressive nature and tricksy, effects-aided camerawork recall Jean-Pierre Jeunet's recent films, which sometimes works, but mostly doesn't as the frequent cut-aways and dips into direct address come off as a big-screen sitcom more than anything else," finds Oliver Lyttelton at the Playlist. "And like those films, your reaction to the film may depend on your tolerance for whimsy." Indeed, "it's way too kitschy" for David Gritten at Thompson on Hollywood.

Domenico La Porta gets a few words with the directors for Cineuropa.

Viewing (2'11"). The Guardian's Xan Brooks warns the film may be too sweet for some, but it's  nonetheless been a big hit with audiences in Venice.﻿ Update: Brooks has posted a few written paragraphs as well: "Chicken With Plums casts an undeniable spell. It is bold, exotic and distinctive, particularly during the animated angel of death sequence. But I confess that Satrapi and Paronnaud's delivery was finally too sweet and winsome for my taste, like eating too much baklava, and considering that this is a film about heartbreak, despair and suicide it does feel awfully fluffy and insubstantial at times."﻿

Update, 9/5: Guy Lodge at In Contention: "Satrapi and Paronnaud are certainly more concerned with ornamenting memory than with parsing it, decking out this slight fancy — those squinting a little may find a ribbon of political metaphor amid the clutter, but don't strain yourself — with a cornucopia of visual filters and frills that pitch the film's aesthetic roughly halfway between Satrapi's own illustrative work and one of the adolescent Jean-Pierre Jeunet's more elaborate wet dreams. They're all realized with exquisite aplomb by the wonderful French cinematographer Christophe Beaucarne (Outside the Law, On Tour), but the cumulative effect is oppressively frou-frou and only intermittently beguiles."﻿

Update, 9/10: "Just as the story combines the fantastical with the biographical," writes Noel Murray at the AV Club, "so does the filmmaking veer from straightforward drama to something more outsized. The tonal shifts don't always work — there's a fake sitcom sequence that bombs badly, for example — but the nested narrative structure gives the movie a sense of inevitability that makes it all the more powerful when Almaric's wife and kids try to figure out what could make him happy."﻿

Updates, 9/18: "Some films traffic reckless, tawdry sentimentality while Satrapi and Paronnaud's sentimentalizes cheapness itself," writes Joseph Jon Lanthier at the House Next Door. "The stylistic thinness is finally heartbreaking: Even after we've saturated it with our own despondency, it's not sturdy enough for us to lean on." Further, from Fandor's Michał Oleszczyk: "Brilliantly described by Joseph Jon Lanthier as a cross between Unfaithfully Yours and Taste of Cherry, the film is all about transforming despair into playfulness — in order to arrive at new level of cosmic acceptance of grief."﻿

Update, 9/23: Another day, another interview: Miranda Siegel for Vulture.﻿

Chicken with Plums is competing in Venice and will be a Special Presentation in Toronto. If you're headed to Toronto, tiffr is a simple yet powerful way to schedule your festival.﻿ For news and tips throughout the day every day, follow @thedailyMUBI on Twitter and/or the RSS feed.﻿