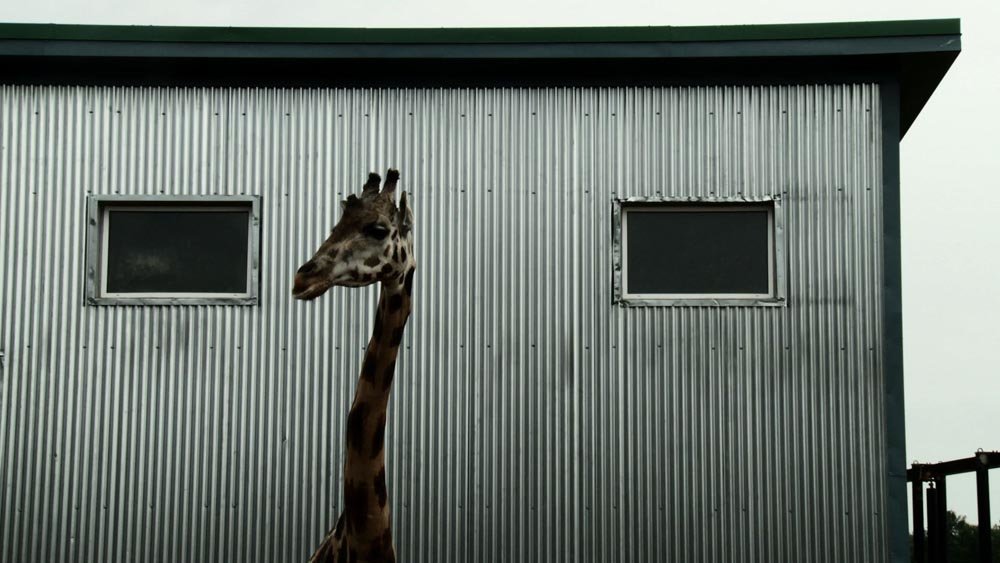 As Godard once said of Jerry Lewis, Denis Côté is "a very good framer, like great painters. He has a lot of sense of geometry." In Bestiaire, Côté trains the viewer's eye right from the opening sequence, in which three artists, one sitting, the other two standing before their easels on either side of her, sketch a doe. It might take a moment for the realization to sink in that the doe is dead; she's been stuffed and mounted in an eerily life-like pose. I have to wonder, too, if the artists weren't chosen for their radically different approaches. One concentrates on establishing the form of the animal, another on the texture of the fur.

What follows is a series of compositions whose dominating principle is the frame. For the most part, Côté does not set out to arrange these compositions in such a way that they'll kick the mind from one idea to the next in one long narrative or rhetorical arc, so that's one less burden on each image; it's not that there's nothing other than the geometry of each frame to concentrate on, but it clears the view.

If Bestiaire were a documentary (and in a moment, we'll get to Côté's argument that it is not), its "subject" would be Montreal's Parc Safari, one of those family getaways where cars are driven through habitats made as natural as budgets will allow (and I'd guess that making Canada pass for Africa can't be cheap). Côté begins with interiors and partial interiors. Bodies and heads and legs and tails of goats and zebras and so on set against perfectly flat planes of gray corrugated metal, muted blue gates, dusty beige walls, all perpendicular to the camera's line of sight. So: the organic forms of the beasts, alive and breathing and occasionally moving, framed in front of static backdrops made of artificial materials. Whether or not by choice, the skies are nearly all overcast, so the light draws the earthy palette out from the furs. The focus is notably sharp, distinctly outlining every hair and claw, and it's all thrillingly beautiful.

There is, though, an unfortunate detour to the taxidermy workshop — unfortunate because, by this point, a good third or half way in, humans, even humans working at a job as visually engaging as stretching a pelt over wires and wood, come off as simply less interesting than the animals. A section of overviews of the Parc, cars and families and all, is less distracting, but never as enthralling as Bestiaire's first half or so. 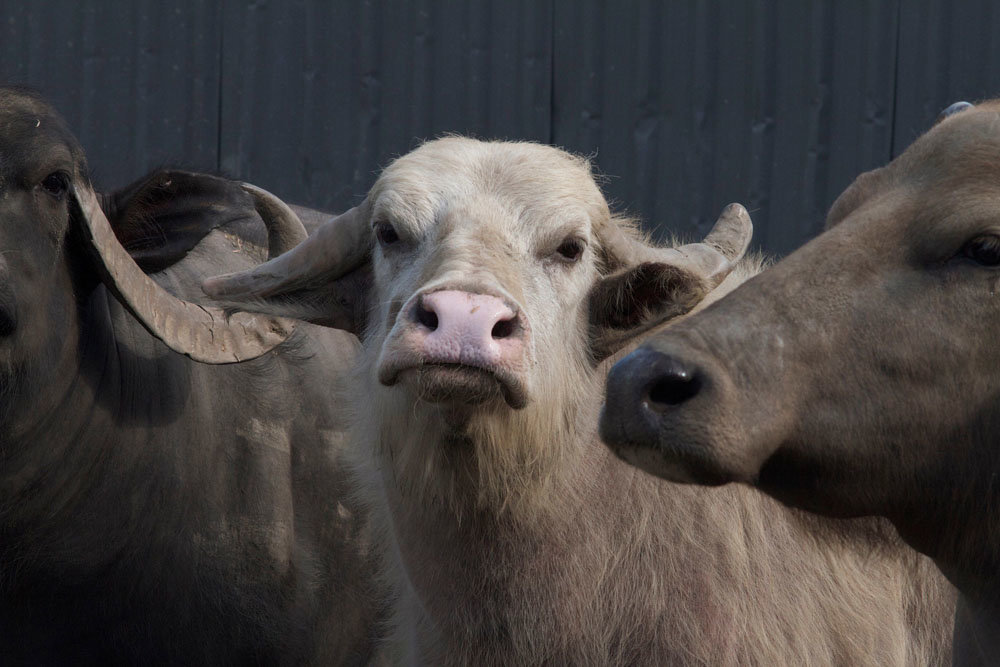 Côté's director's statement (it's in the press notes but not in the catalog) is worth quoting in full:

This film is no fiction, obviously. However, if it were a documentary, there would be a "subject." Also, to describe it as an "essay" would entail a polemic or partisan implication, corresponding to the proper literary term. Cinema has come to label this genre of proposition as "object." I don't know how to label it myself, and even better, if this film is difficult to subsume but poetic at the same time. I started out with a naive desire to explore certain energies and to observe the relations or maybe even the failed encounters between humans and animals. In the end, this film is about contemplation — and something else. Something indefinable, something more obscure which I hope to find out more about with the help of the audience.

Michał Oleszczyk, writing for the House Next Door back when he saw Bestiaire at Sundance, goes a little further than I would, but his is an interpretation Côté would likely lend an ear to: "The single instance of a structuring fade to black (in a movie otherwise perfectly content with a succession of non-narrative cuts) comes when we start to witness a diligent taxidermist at work midway through the film. For it is taxidermy itself — a process of rendering dead bodies look perpetually poised, and thus deceptively alive — that becomes Bestiaire's organizing metaphor. By turning nature itself into a theme park that a zoo ultimately is, we deny its key component (death), clouding it with 'fun' and 'education' instead. Côté deconstructs the mere notion that we're somehow capable of taming nature's ruthless ability to disrupt our peace of mind by reminding us of our own animal status."

Michael Sicinski tweeted a mini-review the other day, part of which reads: "Many striking images (undershot of lion in repose; giraffe against corrugated metal); just as many banal sequences (most human material). Very much like a combination of Bill Viola's existential style and Philibert's easy verite. Can't live up to best ideas. Still, as Steely Dan Sallitt says, Côté's clearly a 'major dude.'"

Finally for now, and just for fun, a snippet from an interview with Côté in the ExBerliner:

Your fave/least favorite movie from last year:
The Turin Horse (Béla Tarr) and The Autobiography of Nicolae Ceauşescu (Andrei Ujică) are two masterpieces. At the [other] end of the spectrum, I'm a bit sad to see that people give credit to an old-fashioned numbing exercise in puritanism like Shame. Or Polisse, a very cheap naive version of "social cinema."