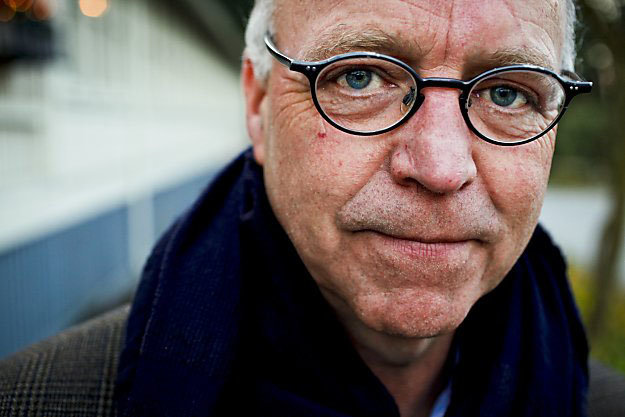 Stunning and deeply saddening news: "The San Francisco Film Society regrets to announce that Executive Director Bingham Ray passed away on January 23 while attending the 2012 Sundance Film Festival in Park City, Utah." He'd taken over the position after Graham Leggat passed away in August. Further into today's statement:

Ray cofounded October Films in 1991 and served as its copresident until its sale to USA Networks in 1999. October was one of the foremost independent film companies of the 1990s, winning two Oscars and garnering 13 Oscar nominations and top prizes at the Cannes Film Festival on three occasions. Some of October Films' credits include the internationally acclaimed Secrets & Lies, The Apostle, Cookie's Fortune, The Celebration, Lost Highway, The Last Seduction and Breaking the Waves.

Bingham Ray's career began in 1981 at the Bleecker Street Cinema, where he worked as a manager and programmer. Other posts he held included president of United Artists, president of Kimmel Distribution and president of creative affairs at Sidney Kimmel Entertainment. He was one of the good guys, a great storyteller, and he will be sorely missed.﻿

Updates: The Sundance Institute has a released a statement: "Bingham's many contributions to this community and business are indelible, and his legacy will not be soon forgotten."

Movieline's ST VanAirsdale remembers him as "supportive, insightful, broad-minded, funny and utterly devoted to films and the artists who made them. He will be mourned, missed, cherished and remembered for a long time to come. R.I.P., Bing."﻿

"There will surely be memorials announced before the festival ends next Sunday," blogs the Boston Globe's Ty Burr from Sundance, "and I imagine there will be many, many glasses raised on Park City's Main Street tonight. He'll be missed, and I don't say that sentimentally. Ray was attending the Art House Convergence Conference when he was stricken, advising theater owners on how to bring the movies he loved to the audiences who might best appreciate them. In other words, he was in his prime and still making a difference. He will be missed."﻿

"The Film Society of Lincoln Center mourns the loss of one of independent cinema's great leaders﻿."

IndieWIRE is collecting remembrances from friends, many of them filmmakers who worked with him.

Updates, 1/24: "The tone was somber at the Highwest Distillery on Park Avenue Monday afternoon, as the San Francisco Film Society hosted a memorial service for beloved film leader, Bingham Ray," reports Charles Lyons at Thompson on Hollywood. "Some 100 people gathered in a large room and remembered their friend. One of the first speakers was Keri Putnam of the Sundance Film Institute. 'All of us are devastated by this news,' she began. 'It's at times like these when we feel we are part of a community.' She read a statement that Sundance founder Robert Redford had written. 'We lost a true warrior,' it began, and continued, 'Most importantly, he was a humanist and lived a life that meant something.'… The New York Times' Manohla Dargis said she had panned a lot of Ray's movies over the years, but that he had remained gracious and a friend. 'I remember having a dinner date with him the night when I panned his movie Lars and the Real Girl,' she said, but, she recalled, he didn't treat her any differently…. Next up was Eugene Hernandez, the co-founder of IndieWire and current director of digital strategy at the Film Society of Lincoln Center. Eugene had recently worked with Ray at the Film Society and grown especially close to him during the past two years. 'He was so excited about San Francisco,' he said, adding, 'Talking about movies — that's what Bingham liked to do most and why we're going to miss him.' Veteran indie producer Christine Vachon echoed a feeling pulsing through the room, 'One of the many things about tonight is to realize how long we have all known each other.' Recalling a year in the early 90s when she brought both Safe and Kids to Park City, she said Ray told her, 'They are both kick-ass films.' She concluded by saying she will miss someone 'who I can have these amazing conversations with.'"

Jim Emerson at SLIFR: "I booked our first film at Seattle's Market Theater from Bingham in 1984 (Krzysztof Zanussi's Contract — for a two-week ramp-up before we opened Jonathan Demme's Stop Making Sense) and when we talked, as we often did, it was sometimes about business, but always about movies…. Bingham (who with his wife Nancy named their first son Nick, after the director of They Live By Night, In a Lonely Place and Bigger Than Life) cared about movies as much as I do (he was greatly responsible for importing Mike Leigh, Jane Campion, Lars von Trier and others to these shores), and he was one of the few 'art house' distributors of the day who understood our philosophy at the Market Theater, which was that, as the owner/operators of a 250-seat independent cinema, our taste, judgment and commitment were our most valuable assets…. Among Bingham's last bookings for the San Francisco Film Society were Margaret and Once Upon a Time in Anatolia — two of the best and boldest films you will see this century. Most of all, though, I can hardly bear that I won't be seeing the man again. Look for his name at a key moment in Mike Leigh's Secrets & Lies. Bingham's immortal in a way, but that doesn't lessen the pain of missing the guy."

Glenn Kenny: "The man was an incredible idealist about movies but also a stone cold realist and he never complained, never really complained, about the uphill battle he had with pretty much every film he believed in, every film he knew deserved a shot, and he had a healthy sense of not-quite-spite but definitely defiance in the face of the forces that stood between him and getting that movie seen. By the same token, he did what he had to do when he had to do it. We once discussed a gig that was less-than-optimum for him and he shrugged and said, 'What are you gonna do? I gotta put the kids through college.' He took all his responsibilities seriously. And it made me shudder, during the post-October periods when I saw him in scrambling mode. To think that a guy as sharp as that, with that kind of taste and tenacity and understanding of both art and commerce was not running things... I couldn't fathom it."

"A little over two years ago, the night after I moved from New York to Los Angeles to take my current job at the LA Weekly, I was seated next to Bingham at the LA Film Critics awards dinner," recalls Karina Longworth. "I hardly knew anyone in the room, and was actually kind of terrified, until I started talking to Bingham, who was so full of great, juicy stories that he made me forget all my self-conscious bullshit…. News of Bingham's passing spread around the festival this afternoon, and cast a palpable pall on the proceedings. Moments after I heard, I wandered in to a screening of a film I knew little about, which turned out to be a painfully conventional romcom, starring a handful of TV actors, about the dating foibles of underemployed 20 somethings living in fabulous lofts. Through the whole film, in the back of my mind I was reeling through the list of films Bingham had a hand in releasing — the above mentioned titles, plus Life is Sweet, Bowling for Columbine, Synecdoche, NY, The Addiction — while here I was, watching Friends: The Movie. Maybe it's a cliche to say 'he will be missed,' but it couldn't be more true."

Scott Macaulay: "I first met Bingham Ray in 1992, when I interviewed him and October Films partner Jeff Lipsky about their company's expansion and move to New York. It was for Filmmaker's second issue, and in our talk, Bingham was all the things he's now being remembered for — committed, combative, intelligent and garrulous." And Scott recalls a statement "which I believe Ray tried to live by in the two decades since: 'We've always been passionate and sincere about the films we're working on. A lot of people become jaded and cynical in this business, but it's never been like that for us and never will.'"﻿

Updates, 1/25: "Bingham was a good friend," writes David D'Arcy at Artinfo. "I had known him since Scarsdale High School, where he was a wise-ass in French class. This was before October Films, which he founded, released Tous Les Matins du Monde, Alain Corneau's 1991 film about the composer Marin Marais (with music played by Jordi Savall)…. Bingham grew up when everyone around him went to foreign films, which tended to be French or Italian back then. Then came German cinema in the 1970s and the film world expanded to assimilate it. I can remember seeing those films at the tiny Pix Theater in White Plains, which seemed to have less than 100 seats. October entered the marketplace when those theaters, or most of them, still operated. Bingham believed that the market could be broadened, and that quality was an advantage, not an obstacle.  That promise hasn't been fulfilled, and it will be harder to keep now that he's gone."

"Because his career has been so varied — distributor, exhibitor, producer and executive — Bingham Ray has probably done more for independent and international cinema in this country than anyone else," argues the FSLC's Eugene Hernandez. "Only the many filmmakers themselves can be credited with having a greater singular impact on our overall film culture. Imagine what he might have achieved in this next chapter of his life. 'Give me five years,' he told people last week at the Art House Convergence [at Sundance]. Little did we know we only had him for about five more days."﻿

Update, 2/4: "Mr Ray, whose career paralleled the ups, downs and triumphant and difficult studio detours of the contemporary independent film movement, was one of its most heroic figures," writes Manohla Dargis in the New York Times, where she then sketches a brief history of "off-Hollywood" before adding, "It would be a mistake to reduce Mr Ray's career to being the anti-Harvey Weinstein, even if there's also some truth to this description." The San Francisco Film Society "seemed like a perfect fit for a true believer like Mr Ray, who had retained his passion for cinema through his career highs and lows, holding on tight during the wild ride that took independent film into the multiplex. This love for movies is partly what endeared him to many in the independent film world, who counted him as a friend, a mentor and an inspiration."﻿

Update, 2/20: "IndieWIRE has collected clips from the February 9 memorial service to share with everyone."﻿