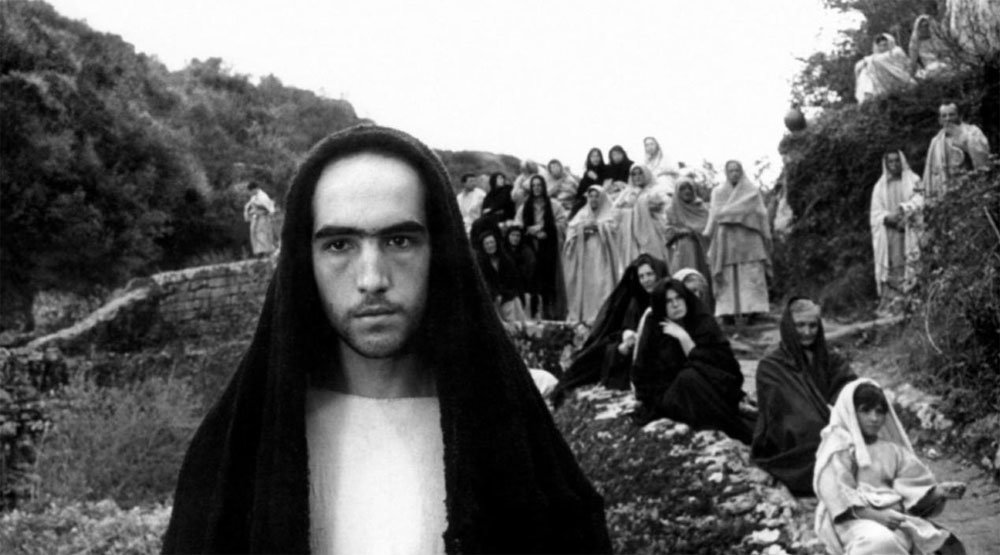 "In 1962 Pier Paolo Pasolini received a suspended sentence for his allegedly blasphemous contribution to the portmanteau film Rogopag, a brilliant sketch satirizing biblical movies," writes Philip French in his brief review of the new Masters of Cinema release of The Gospel According to St Matthew in today's Observer. "Two years later the gay, Marxist atheist showed the world how a life of Christ should be made, and it is a magnificent achievement, far superior to Scorsese's or Gibson's films."

David Jenkins in Little White Lies: "Essentially a 'straight' retelling of the life of Christ (who is played with fervent intensity by Enrique Irazoqui), which, on its surface, seldom editorializes or strays towards controversy, the film was fully embraced by the religious community to the extent that a colorized version was made to capitalize on the Bible belt buck. General familiarity of with the text makes this one of Pasolini's most easily approachable films, as we're given a Jesus Greatest Hits package which covers everything from Herod's violent purging of first borns via the loaves and fishes, walking on water and through to Christ's death by crucifixion. While the passionate sincerity of the delivery initially makes you wonder why Pasolini should change his tack so completely, the anachronistic tics and subtleties of the filmmaking offer room for deeper consideration."

The Wikipedia entry on St Matthew features a quote from Scorsese on Scorsese: Revised Edition, edited by Ian Christie and David Thompson (2003), in which Scorsese recalls seeing Pasolini's film for the first time:

Up to that point, I had an idea to do a film on Jesus, in cinema-vérité style, in the Lower East Side of New York with everyone wearing suits, a modern-day interpretation of the story we know. So I was moved and crushed at the same time by the Pasolini film because in a sense it was what I wanted to do. Jesus was played by a Spanish law student, and it was shot in the south of Italy... Pasolini's use of faces was marvelous. It reminds me of Renaissance art even though it's in black and white, and I love the music – the Missa Luba and Bach. Just compare his Christ with Jeffrey Hunter. He doesn't act walking, he is walking; it's not self-conscious and yet it's very determined... I like [Pasolini]'s Christ as a kind of conspirator. It was a revolutionary Jesus. In fact, at the time, people referred to him as a Marxist Christ. The strength of Matthew's language comes out very clearly, and it's purer because it doesn't try to make it a straight story from beginning to end. There are no transitions between scenes, characters come and disappear, they reappear in no dramatic way. Yet the key to the whole picture is Jesus – how forceful He is and how He carries through. 'Do not think I have come to bring peace on this earth. I have come to bring a sword... He who loves his father and mother more than me, is not worthy of me.' This is not the stuff you usually hear on Sunday morning in church! He's a very strong Christ, you're either with him or against him, and some of the sermons do give you the sense of being yelled at and beaten down. 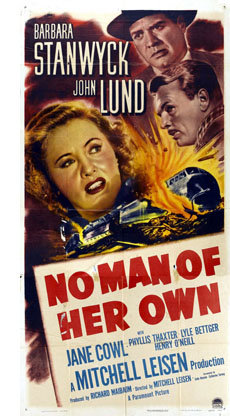 "Mitchell Leisen's 1950 No Man of Her Own, which Olive Films has recently released on DVD, combines two genres that are often considered antithetical: the male-oriented film noir and the sort of domestic melodrama that was once known as a 'women's picture.'" Dave Kehr in the New York Times:

It has a star, Barbara Stanwyck, who was all but alone among the performers of her time for her ability to register in both genres….

The kind of close control of lighting and set design that Leisen depended upon for his art was made possible by the particular conditions of studio filmmaking, in which everything could be built to measure and photographed to perfection. These conditions were changing even as Leisen was making No Man of Her Own — faced by competition from television and the loss of its theater chain, Paramount was slashing budgets just as all the major studios were — and directors of Leisen's meticulous ilk would find tough sledding ahead.

Five years later, we find him at MGM for Bedevilled, which was recently issued for the first time in its proper widescreen version by the Warner Archive Collection. Billed as "the first motion picture to be photographed in Paris in CinemaScope and color," the film is a vivid illustration of how location shooting was coming to replace back lot construction, while the realism of widescreen and color was coming to replace the stylization built into black and white.

In the works. At Artinfo, Graham Fuller notes that Michel Gondry will start shooting Mood Indigo, an adaptation of Boris Vian's surrealistic novel L'Écume des Jours (Froth on the Daydream), on Tuesday. Romain Duris and Audrey Tautou play "wealthy newlyweds Colin, an inventor of the olfactory instrument the pianocktail, and Chloe. Their bliss is destroyed when they discover during their honeymoon that she has a water lily growing in her lungs; she can only survive by being surrounded by flowers. Gondry himself will play her eccentric doctor, Mangemarche."

New York. "Broadly speaking, Zachary Oberzan's Your Brother. Remember?, an experimental video essay in which Oberzan and his older brother faithfully reenact home movies they made together 20 years earlier, is the best work of its kind since Mark Rappaport's From the Journals of Jean Seberg, with which it shares not just formal qualities, but emotional and intellectual ones as well." Calum Marsh in Slant: "Like Journals, and Rock Hudson's Home Movies before it, Your Brother. Remember? resembles something of a video collage composed of largely preexisting material. Oberzan culls his footage from three primary sources — Jean-Claude Van Damme's cult classic Kickboxer (1989); the infamous mondo 'documentary' Faces of Death (1979); and home movies made by Zachary and his brother, Gator, in which they attempt to recreate scenes from those two films, which they shot around 1990 — and combines it with new, meticulously choreographed reenactments of their former imitations. What results is a surprisingly sophisticated meditation on the specificity of cinematic representation and the impossibility of successfully reclaiming the past, as well as a secondhand character study as exhaustive and authentic as any in recent memory. That it does all of this amid Van Damme impersonations and toilet humor is what elevates it from a work that's merely accomplished to something like a work of genius."

Browsing. Ted Fendt, whose translations of Luc Moullet and others have been featured here on the Notebook, has a new blog, Howling Wretches.

A tumblr devoted to John Cassavetes.

The House Next Door's "15 Most Anticipated Summer Films."﻿