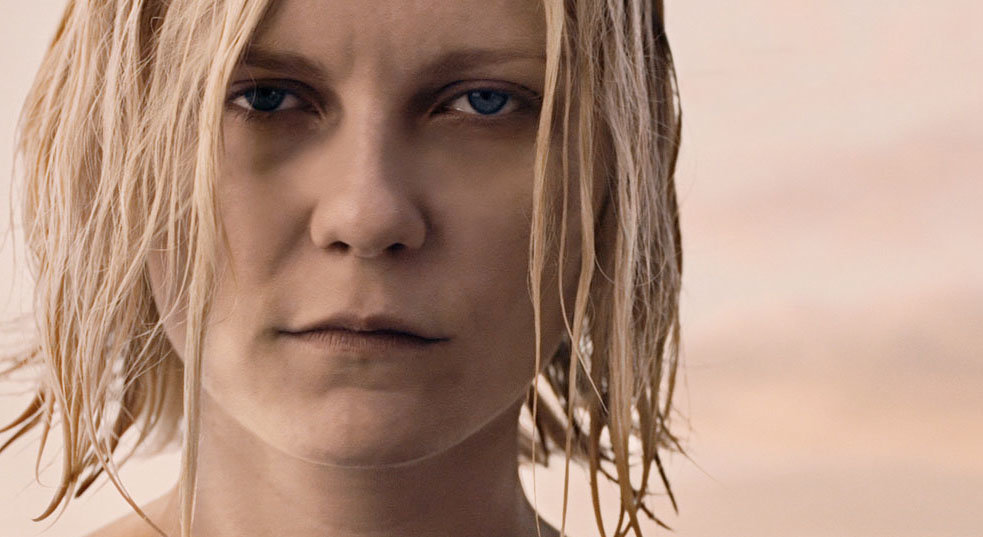 Nearly every weekend since its premiere in Cannes, Lars von Trier's Melancholia has opened in theaters in this or that country around the world, and today it hits the UK. It's also screened at a good number of festivals, including Toronto, and sees its first date in the States at the New York Film Festival on Monday. The following Friday, it'll be available on demand from Magnolia before finally opening in US theaters in November.

When and wherever you catch it, you may, like Farran Nehme, find the experience "unexpectedly marvelous. Divided like Gaul into three parts: a magnificently surreal flash-forward to the apocalypse that is about to hit in the form of a planet colliding with our own; a midsection showing the slow-motion cataclysm that is the wedding of Justine (Kirsten Dunst) to Michael (Alexander Skarsgård); and a finale focusing on Claire (Charlotte Gainsbourg), Justine's sister, as the end approaches and the extravagantly depressed Justine drifts around uttering downers like the bad fairy at a christening. Despite its plot and preoccupations, Melancholia merits adjectives that the Siren had not previously associated with von Trier: subtle, charming, sympathetic."

The adjectives coming out of the UK today are a mixed bag. "Melancholia is so stupendous, imaginative, weird and outlandish that it rearranges the contents of your soul," writes Nigel Andrews in the Financial Times; but the Guardian's Peter Bradshaw declares the film to be "entirely ridiculous, often quite boring, with a script showing worrying signs of being cobbled together. But even as a longtime Von Trier doubter, I now have to admit it grows on you; there's a mawkish fascination and some flashes of real visual brilliance, especially in the mysterious series of dream-tableaux that begin the film, which take something from both Millais's Ophelia and Resnais's Last Year at Marienbad."

Slant's Ed Gonzalez argues that "Melancholia peaks with its prelude, a dazzling eight-minute collage of slow-motion postcards from an apocalyptic edge…. Set to the prelude to Richard Wagner's Tristan and Isolde, this poetic, referential succession of near-still images so immaculately distills Melancholia's moody narrative and themes that it makes the two-hours-plus that follow seem impossibly redundant."

For Richard Porton, writing in Cinema Scope, "despite his professed admiration for modernist masters such as Tarkovsky and Antonioni, von Trier will always be the most vacuous kind of postmodernist. A talent for visual pastiche served von Trier well in early features such as The Element of Crime (1984), an enjoyable assemblage of noirish themes with a strikingly expressionist visual palette. But his efforts to tackle Big Themes in subsequent films consistently degenerate into artistic elephantiasis. Melancholia's grandiloquent 'overture' is a case in point. Although there's certainly superficial virtuosity in the digitized tributes to the Pre-Raphaelites, Gregory Crewdson, and Brueghel that set the stage for the apocalyptic proceedings, the overall achievement seems to be more akin to a superlative job of photoshopping than anything approximating the more nuanced artistic reveries of Tarkovsky or Antonioni."

At the House Next Door, Nick Schager finds that "Melancholia is ultimately beset by the same nagging problems that plague all of von Trier's more subdued works — namely, that it never seems fully sincere, or engaged with its characters, in a way that might compellingly grip one's heart or imagination."

"This film is perilously close to the aesthetic of American mainstream films." That's von Trier himself, as quoted by Danny Leigh in the Guardian. And Leigh agrees: "Melancholia may just be the year's best American movie…. Von Trier's fixation with America hasn't only — or even most importantly — been restricted to setting his movies there. There's scarcely a genre familiar from Hollywood he hasn't dabbled in. He's done noir, science fiction, Sirkian melodrama, the musical, cabin-in-the-woods horror. His cultural promiscuity is part of what makes him so interesting. For all that Hollywood and international cinema often feel walled off from each other, the grey zone where they collide is a fascinating place. And that's exactly where you'll find Melancholia." 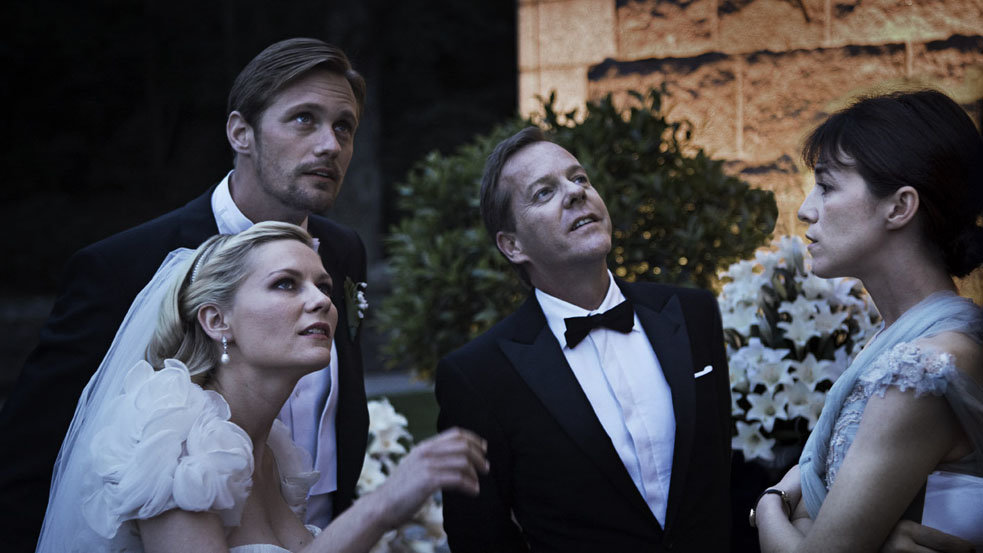 "It's no wonder I sometimes yearn for the good old days when directors were anonymous hires instead of beloved auteurs who sometimes say and do the darnedest, most awful things." In the New York Times, Manohla Dargis spins a few thoughts sparked by that infamous press conference in Cannes that got von Trier declared persona non grata at the festival. "Judging filmmakers along with their films is a favorite critical pastime, and it was fascinating to wade through the confusion of responses to Mr von Trier's statement, in particular the struggle to reconcile a superb work like Melancholia with his words. The mistake was thinking that the two could be reconciled rather than admitting that some contradictions remain insoluble."

Update, 10/1: "Absent are the usual von Trier double crosses, slippery send-ups and self-satire, empty 'Brechtian' distancing devices, and rampant misogyny," notes Amy Taubin in Artforum. "Women have almost always played a central role in his narratives, which typically fall into one of two categories: those in which the female protagonist is tortured nonstop and achieves beatitude through suffering (Breaking the Waves [1996], Dancer in the Dark [2000]) and those that end with her taking bloody revenge on her torturers (Dogville [2003], Antichrist [2009]). Melancholia breaks both molds — and as a result it is the first movie by the director that I haven't loathed. It is nevertheless certifiably von Trier in its formal strategies, primarily the subversion of popular movie genres (here, the wacky wedding comedy and the disaster-from-outer-space flick) through the blatant imposition of an aesthetic that at once heightens and decimates the conventions of realism on which those genres depend. As Pop art was to Godard's mid-60s movies, German Romanticism (including its devolution into Nazi kitsch) is to Melancholia."﻿

Updates, 10/3: The New Yorker's Richard Brody: "Melancholia is of a piece with von Trier's other recent films; everyone is either a shit or a doormat, and this facile misanthropy enables him to film the destruction of the world with bombastic delight. His own joy in destruction is his baseline trope — an infantile sadism in which he treats characters like flies whose wings he plucks or worms he cuts or ants he burns, a puerile glee in the death of the craftily guilty and the death of the stupidly innocent."

"In Melancholia, von Trier apologizes for his recent psychological state," writes Henry Stewart in the L. "But he vindicates it as well."﻿ 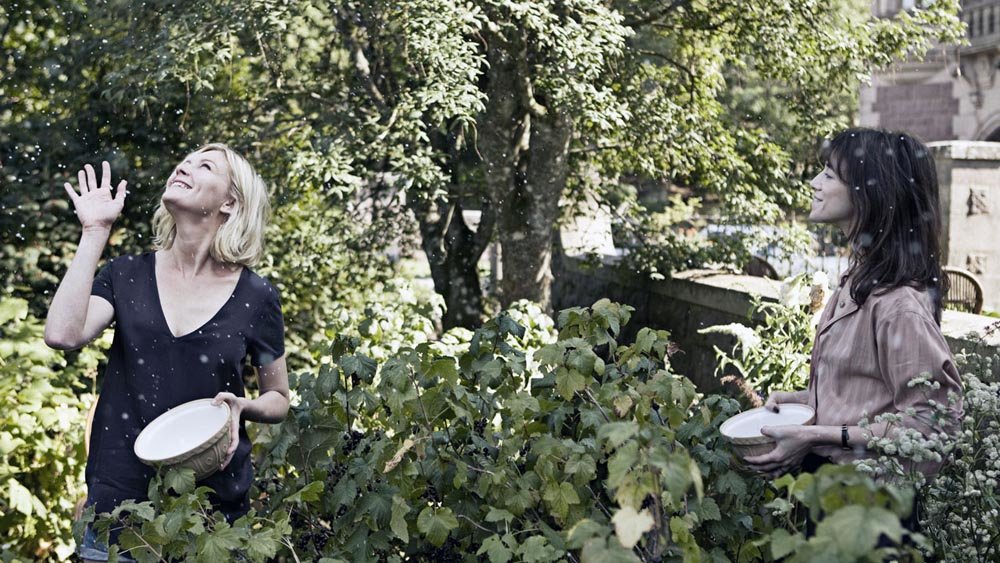 Updates, 10/5: Chris Wisniewski in Reverse Shot: "Melancholia has drawn many comparisons to another cosmic existential head trip that, like this film, debuted at Cannes 2011: Terrence Malick's The Tree of Life. Their superficially similar structures are obvious. The former imagines, with despondent nihilism, the end of the world through the experience of a person uncommonly attuned to the worthlessness of living; the latter tries to make sense of death and human suffering by contemplating the origins of the universe and of life on earth, as well as the childhood of its protagonist. It should be stated on the outset, however, that Trier's film is not the yin to Malick's yang; it is its opposite."

"Lars Von Trier's notorious latest baby is the least violent, and yet the most obliterating entry in his ongoing cinema of emotional assault," writes Michał Oleszczyk. "Pensive, timely and acutely understated, Melancholia taps into a state of mind more than it does into plot development." Also at Fandor, Jaime N Christley: "In an abjectly literal manner that underscores, by contrast, Antichrist's Grand Guignol abstraction, von Trier performs his own biopsy, extracting the tumor of his depression and flinging it not only upon the screen, but at the sum of life on Earth. Not to put too fine a point on it, but this is the sort of thing depression sufferers daydream about: all-of-existence-icidal reveries that combine a doing-unto-others and a surrender to a Big, Devouring Thing."

For Ambrose Heron, "he seems to be channelling two very different films: Solaris (1972), with its exploration of a ‘living' planet affecting human emotions, and The Celebration (1998), Thomas Vinterberg's hellish depiction of a family gathering, which still stands as the highpoint of the Dogme movement Von Trier helped create." And for Tony Dayoub, "Melancholia is yet another candidate for best film of the year."

Meantime, Danish police are looking into whether or not Lars von Trier broke French laws regarding the justification of war crimes when he made those infamous comments in Cannes. Von Trier has released a statement, and the Playlist's Kevin Jagernauth has it in full, but here's the gist: "Due to these serious accusations I have realized that I do not possess the skills to express myself unequivocally and I have therefore decided from this day forth to refrain from all public statements and interviews."

Jagernauth also talks with Dunst about the films she'll be appearing in next, and they "range from raunchy comedy to heady, sci-fi romance."﻿

Update, 10/19: Jim Emerson: "If Terence Malick's Tree of Life is, as I described it earlier in the year, 'a movie about (and by) a guy who wants to create the universe around his own existence in an attempt to locate and/or stake out his place within it,' then Melancholia, by my reckoning, is a movie about (and by) a person whose depression is so inescapably great and soul-destroying that it envelops and annihilates the world. Because it has to. There's nowhere else for it to go. Also, it's important for the depressed character/filmmaker to firmly assert that the only life in the universe is on Earth, and that all of it is annihilated. Hope of any kind is not an option."﻿

Update, 10/22: "Justine and Claire — and the halves of the film titled for each sister — seem to function as, respectively, the director-surrogate and audience-surrogate," writes Josh Timmermann. "The intense discourse inspired by these concentric relationships gets us somewhere close to the 'heart' of the film. So, yes, an understanding of, not the experience of clinical depression (it's like watching a rogue planet travel through the sky en route to obliterating the one we live on, remember?), but of Lars von Trier's much-publicized medical history does add a rich extra layer to one's engagement with Melancholia." It's "von Trier's most fully-realized film since Dogville. If it requires some contextual leg-work on the part of the viewer, it's worth it; if it's not a masterpiece, it's close."﻿

Update, 10/25: "I would sooner return to the dull drama and fanatic grotesquery of Antichrist, or the brutality inflicted on Björk in Dancer in the Dark, or the smug anti-smugness of The Boss of It All, or the immorally moral tale of Dogville (my favourite of his works), or even its lesser sequel before returning to Melancholia," writes Adam Cook. "This isn't a critical judgment. Melancholia is Lars von Trier's purest expression. It stands perfect in its misery. Its flaws, qualities, beauty and ugliness lie in the eye of the beholder."﻿