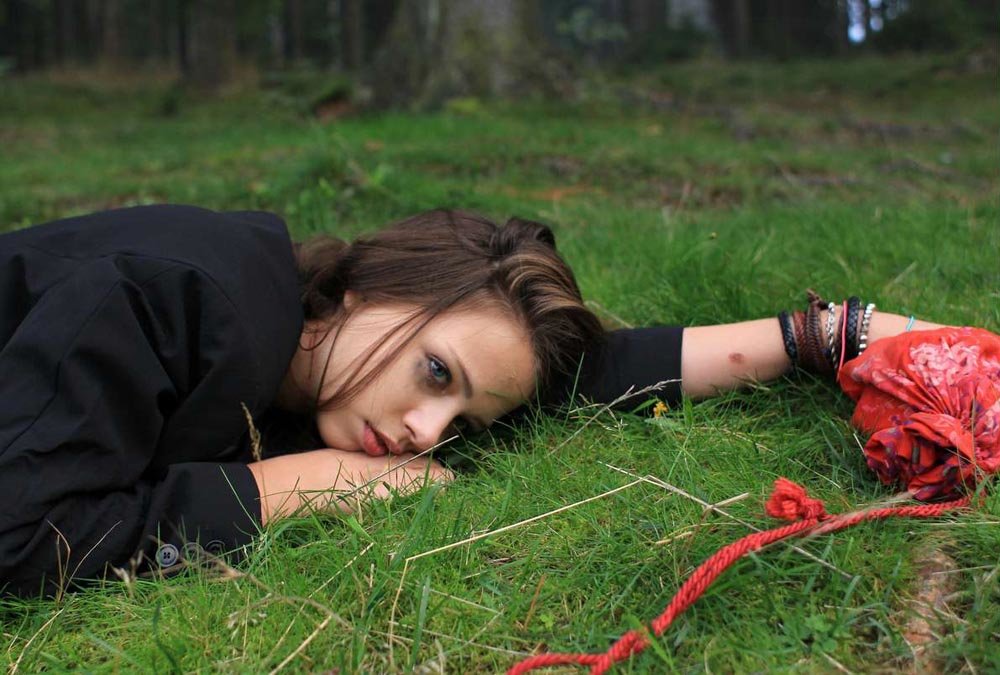 The three 90-minute features made for German television that comprise the trilogy Dreileben — Christian Petzold's Beats Being Dead, Dominik Graf's Don't Follow Me Around and Christoph Hochhäusler's One Minute of Darkness — "share a single plot event," noted Girish Shambu a couple of weeks ago, explaining why he was ranking Dreileben among the personal favorites he saw in Toronto: "a murderer in custody is brought to a hospital to visit his dying foster mother, and uses the opportunity to escape. They weave separate stories around this event, often at its peripheries, occasionally moving to its center. The Petzold film, Beats Being Dead, employs a mise en scène that is so absurdly clean that it strikes me as humorous…. The Hochhäusler film (to my mind the strongest of the three) finds an equivalence between a cop losing his hearing and a hypersensitive, mentally disturbed murderer. This is a film about heightened, concentrated sense perceptions that puts the characters — and us — in a strange and uncanny awareness of the surrounding natural world. The crack of a twig, the chaotic swarm of an anthill, the crawl of a colored bug on a leaf, the smear of an animal's blood on a man's face — all of these register with uncomfortable vividness, their impact enhanced by the electronic soundtrack of hums, whirs and whines that is forever reminding us of the hearing loss of the protagonist. A strongly sensuous film."

"Unlike the dire Red Riding Trilogy," writes Phil Coldiron in Slant, "Dreileben occurs in vertical rather than horizontal time, with each of the three sections complicating any sense of temporal certainty in the others. This conflicted time is just one facet of the struggle for a coherent narrative that lies at the heart of the project, a fact that manifests itself on every conceivable level across the film's nearly five hours. Graf's section, Don't Follow Me Around, embodies this conflict most distinctly on the level of narrative: What begins as a procedural modulates into a chamber piece centered on the drama caused by the revelation of a mutual lover shared by two old friends. Graf builds the film out of cluttered, illogical compositions (his favorite being a fractured image that splits two people in close contact into completely separate spaces) and unmotivated camera moves that give the impression of an organizing intelligence situated forever beyond our recognition." 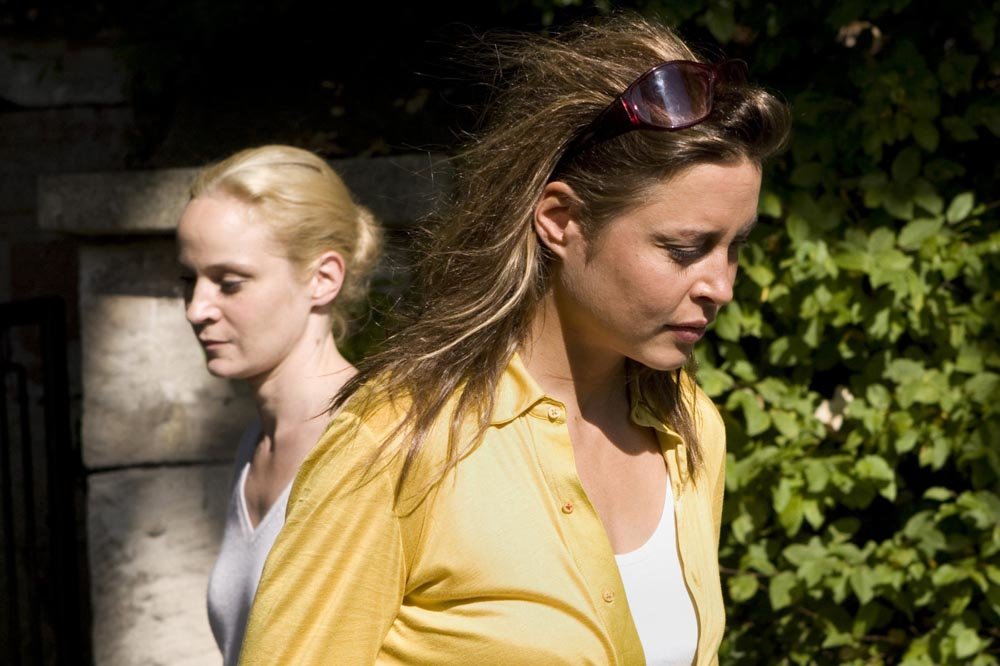 "While Hochhäusler invokes detective, monster movie and fairy tale genres, and Graf mashes domestic melodrama with cat-and-mouse cop movie, Petzold's piece is a teen dream of desire and deception cast under a Hitchcockian spell," writes Fandor's Kevin B Lee. "While news of an escaped convict buzzes through town, a young hospital intern falls head over heels for an immigrant girl; their extended mating dance unleashes newfound reserves of lust, tenderness, jealousy and betrayal, all dealt with stunning swift force. Like Hitchcock, Petzold plays a meticulous game of perspective-shifting to tilt our sympathies back and forth between the two lovers until the point of irreparable damage is reached."

In Cinema Scope, Dennis Lim sketches the contextual background to the project, noting that it began with "an email correspondence among the three filmmakers, published in Revolver magazine in 2007, on the state of German cinema that revealed mutual concerns and sharp disagreements. Graf was born in 1952, Petzold in 1960, Hochhäusler in 1972, and each has a distinct relationship to the now decade-old 'new German cinema' that has come to be imprecisely known as the Berlin School. Graf, a respected senior figure and a stalwart of German television, predates the Berlin School's emergence, and has criticized what he sees as the reticence and passivity of many of the films. Petzold is often identified as one of the movement's de facto founders, part of the pioneering wave that studied at the dffb in the 80s and 90s. Hochhäusler belongs (with Benjamin Heisenberg and Ulrich Köhler) to the Revolver-aligned second generation, whose careers have progressed and diverged in ways that reflect the constant sense of flux, born of habitual self-examination, that defines this loose group…. If the Berlin School's house style — cool, precise, observational — was positioned as a reaction to mainstream storytelling conventions, the recent move toward genre experimentation, with an embrace of more robust narratives and more expansive emotions, seems partly a reaction to the marginalization of the early films."

At Tativille, Michael J Anderson and Lisa K Broad argue that "the Eastern 'Berlin School' is making its best effort at commemorating the memory of Polish master Krzysztof Kieslowski and his single-diegesis multi-part sagas — both The Decalogue (1989) and the Three Colors trilogy (1993-1994) are very germane to the latter-day trio — following more than a decade after the FDR-born Tom Tykwer began his own work of elaborating upon the former's idiom. Kieslowski, in other words, is once again proving to be an over-sized influence in his neighboring Germany, even as the tenor of modernist and postmodernist world cinema elsewhere appears less and less indebted to the maestro of multitudinous parallel narrative forms and especially to his very keen sense of filmic craft."

At the House Next Door, Kenji Fujishima suggests another point of reference: "Dreileben as a whole could be considered yet another modern-day variation on Béla Tarr's 1994 Sátántangó, at least narratively speaking. The German series also shares with Tarr's epic an interest in dissecting a whole social environment, uncovering some unsavory human truths in the process. 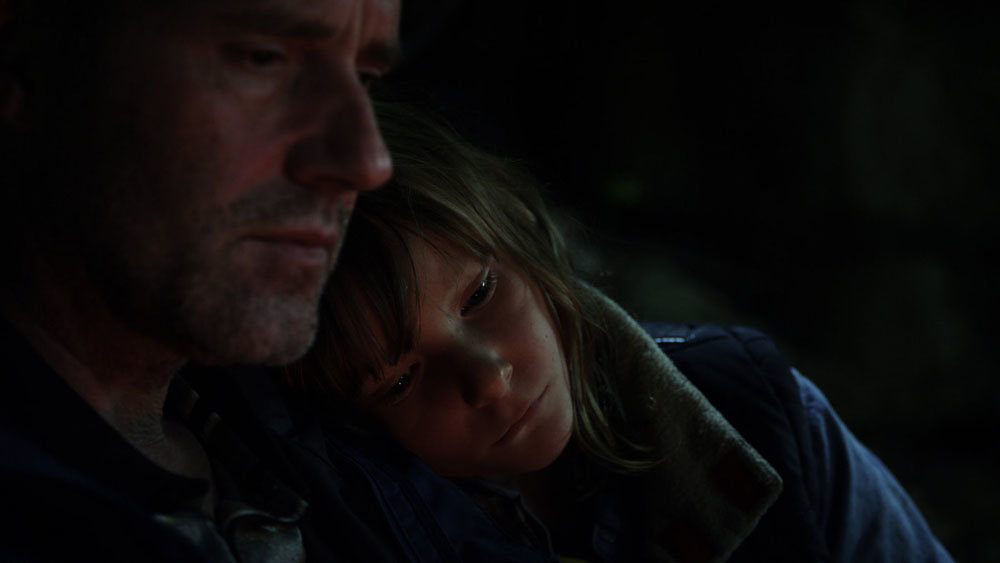 As you click from review to review, you'll naturally find critics comparing each of the three films with the other two; what's fascinating, too, though, is to discover not only an impulse to rank them but also how differently each writer actually does. For Notebook editor Daniel Kasman, "Petzold's Beats Being Dead stands alone, not just as the finest film of the three but as the most self-sufficient." R Emmet Sweeney, writing for TCM, sees Don't Follow Me Around as Graf's "play for a communicative cinema, shot in soft, sun dappled 16mm, shifting from the hard-edged 35mm and HD of Petzold and Hochhäusler." At the Playlist, Christopher Bell sums up with a report card: Beats Being Dead (B-), Don't Follow Me Around (B+) and One Minute of Darkness (A). At the L, Vadim Rizov seems slightly disappointed in the Petzold, more so with the Graf and very much so with the Hochhäusler. ﻿

Update, 10/5: In Reverse Shot, Leo Goldsmith argues that "the aesthetic questions addressed by this triptych aren't just the provincial concerns of a national cinema; rather the contradictions of cinematic form and function suggest that the 'three lives' indicated by the film's title have immense import for international cinema generally."﻿

Update, 10/17: David Bordwell notes that "works like Dreileben characterize much of today's festival moviemaking: an effort to graft modernist narrative strategies onto a genre-driven plot premise…. A cynic could argue that a serial-killer investigation serves to attract audiences who might be put off by purely formal gymnastics. But actually mystery plots, based on hiding information and misdirecting our attention, mesh well with the narrational maneuvers of international art cinema. If crossover films like this bring in more viewers, that's a side benefit of merging two robust traditions — a storytelling mode that hides and then reveals secrets, and one that believes that even when revealed, secrets remain secretive."﻿