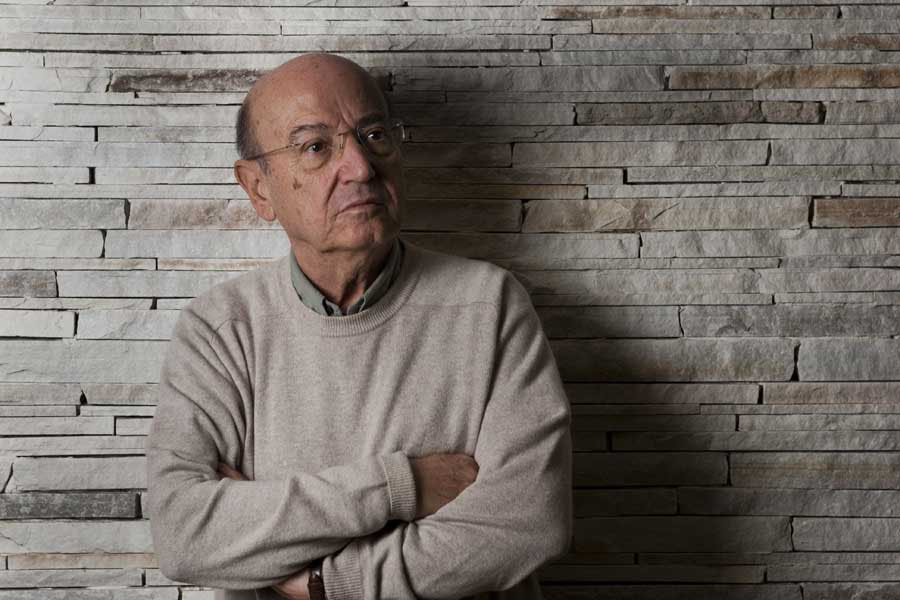 Just ten days ago, we were pointing to an interview in which a lively-sounding Theo Angelopoulos was telling David Jenkins in Sight & Sound about his plans for his next film, The Other Sea. Now word comes via, among others, Kevin Jagernauth at the Playlist that the 77-year-old filmmaker was struck by a motorcycle near the set not far from Athens' main port of Piraeus and has died of his injuries. At the moment, the AP has only a few other details on the accident.

Acquarello in Senses of Cinema in 2003: "From the absence of the conventional word 'End' at the conclusion of his films to his penchant for interweaving variations of episodes from his earlier films (which, in turn, are often culled from personal experience) to create interconnected 'chapters' of a continuous, unfinished work, Angelopoulos's cinema is both intimately autobiographical and culturally allegorical and, like the children of Landscape in the Mist [1988], traverses a metaphysical plane where the real and the mythic figuratively (and sublimely) intersect to map the organic and borderless landscape of the Greek soul." And at Acquarello's Strictly Film School, you'll find her reviews of six of his films.

Also in 2003, Geoff Andrew introduced Angelopoulos to an audience at what was then still the National Film Theatre in London: "I think he's probably the most distinctive film-maker at work today anywhere in the world because [after] five seconds you know it's his film. Nobody else creates a universe like Theo Angelopoulos."﻿

Someone's left this note at the IMDb under the citation for the Grand Prize of the Jury awarded to Ulysses' Gaze (1995): "Obviously very disappointed that he and his cast headed by Harvey Keitel had not [won the Palme d'Or], Angelopoulos told a shocked and suddenly silent audience, 'If this is what you have to give me, I have nothing to say.' Andy Garcia, presenter for the award, didn't know what to do when the director went off stage without even pausing long enough for photos and followed Angelopoulos." He did win the Palme d'Or, though, in 1998 for Eternity and a Day as well as several other awards throughout a career that spanned four decades.﻿

Updates, 1/25: For the Guardian's Peter Bradshaw, the very circumstances of Angelopoulos's death — a traffic accident that's taken him even as he was working on what might have been his last film — "has an enormous irony and poignancy: so much of his work is about the unfinished story, the unfinished journey, the unfinished life, and the realisation that to be unfinished is itself part of the human mystery and an essential human birthright and burden. This was part of what he conveyed to audiences, in a cinematic style that was poetry and epic poetry, steeped in the tumult of Greek history from the time of the second world war, and yet his movies were anything but frenzied or dramatic. They addressed not history's surface action but its spiritual causes and effects; he created long, dreamlike takes in long, dreamlike films, visual compositions of great beauty and delicacy, and a tempo that was largo, rising occasionally to adagio."

Scott Tobias at the AV Club: "His breakthrough film, the four-hour 1974 epic The Travelling Players, epitomized the difficulties and rewards of Angelopoulos's best work. Composed of just 80 shots, each a meticulous tableau with subtle camera movement, the film cannot be fully comprehended without an understanding of modern Greek history and Aeschylus' Oresteia tragedies. And yet it's possible to be awed by it without fully comprehending it: Made under the shadow of a military dictatorship, the film follows an acting troupe across a country ravaged by civil war, and if some of the details are hard to decipher, Angelopoulos's political message and magisterial images come through powerfully."

"The Other Sea, starring Italy's Toni Servillo and Greek newcomer Irini Stratigopoulou, was in the middle of its six-week shoot," reports Joseph Proimakis at Cineuropa. "Scripted by Angelopoulos with input from Cretan writer Rhea Galanaki and long-time collaborator acclaimed novelist Petros Markaris, the film was to focus on the economic hardships of modern-day Greece — the future of the €4-5 million production is now uncertain."

Ray Pride posts a photo of Angelopoulos he snapped in Thessaloniki in 2008 and adds an extract from an interview: "How can you ever finish a film?" "I can't. You will have noticed, if you look carefully, that my films never really end. To me they are all works-in-progress."

Viewing. A "career in clips." The Guardian's Xan Brooks posts a collection.﻿

"His elliptical style was born partly out of the restrictive atmosphere of the epoch during which he managed to make his first feature, Reconstruction (1970)," writes Ronald Bergan for the Guardian. "Shot in spare, high-contrast black and white, it was about a Greek migrant worker who returns from Germany and is murdered by his wife and her lover. It was immediately clear that the director was less interested in the crime story than the ideological, individual and collective implications of the murder inquiry. Angelopoulos then emerged on the international scene with his impressive historical triptych, Days of '36 (1972), The Travelling Players (1975) and The Hunters (1977), the most ambitious Greek films to date. Shot by Giorgos Arvanitis, the cinematographer on almost all of Angelopoulos's films, they are long, contemplative studies of modern Greek history."﻿

Angelopoulos "wasn't just the most important Greek director of his generation," writes the Film Society of Lincoln Center's Scott Foundas, "but also one of the last true masters in a dying tradition of 20th-century European modernism. Which may be what Angelopoulos meant when he said, in his 1998 acceptance Palme d'Or speech at the Cannes Film Festival, 'I belong to a generation slowly coming to the end of our careers.' … As a teenager, he immersed himself in poetry (especially that of TS Eliot and George Seferis) and, eventually, movies (Huston, Hawks and Walsh were among his early favorites). But bowing to family pressure, he enrolled in law school at the University of Athens, dropping out before graduation and heading for that bohemian Mecca, Paris. There, he eventually found himself at the famed film school IDHEC and, perhaps more significantly, in that sacred temple of cinephilia known as the Cinemathèque Française. He devoured the films of Welles, Murnau and Antonioni, and soon tried his hand at making one of his own, a thriller called Black and White, the negative of which remained at the lab when Angelopoulos could not afford to pay for it." Scott walks us through the filmography before wrapping with this:

As genre films, pastiche and a pan-global wave of neo-neorealism have become the dominant fashions on the international film festival circuit, there has seemed to be ever less room for Angelopoulos' brand of large-canvas, symbol-laden, formally rigorous moviemaking. (Most likely due to lack of DVD availability, or comprehensive retrospectives, he has never been taken up as a cause by the same "remodernist" hipsters who have made a patron saint out of Béla Tarr.)  But as the invaluable David Bordwell reminds in a 1997 essay on Angelopoulos, "Often majestic, sometimes mannered, almost always melancholic, Angelopoulos demonstrates that, contrary to what prophets of postmodernity keep telling us, cinematic modernism can still open our eyes." Now that he is gone, as is all too often the case, many new viewers will doubtless open their eyes to his work. To quote TS Eliot: "In my beginning is my end." And vice versa.

﻿Update, 1/26: "His final film, The Dust of Time, largely retained the rigorous template he'd developed for over three decades," writes David Jenkins for Little White Lies. "An elegiac European saga which addresses the manifold problems of age, identity and the creative process, The Dust of Time sees Willem Dafoe as a film director whose daughter goes missing, an occurrence which halts production on his latest autobiographical film. Directors in the midst of existential meltdown were commonplace in Angelopoulos's work, featuring in films like Ulysses' Gaze and Voyage to Cythera."﻿

Update, 1/27: "The sorry state Greece finds itself in today was built against Angelopoulos's poetry of images," writes Costas Douzinas in the Guardian. "If, for a moment, we put to one side the immediate economic news, a largely unreported dramatic picture of decay of the integrated political, economic and media elites that ran the country for the last 60 years emerges. The implosion of this elite is a textbook study in the collapse of a system of power." And he lists "some recent symptoms, each of which have occurred in the last month, and which show an elite turning in on itself."﻿

Update, 1/28: A tribute from Curzon Cinemas: "Though his death has come as a shock to many, Theo Angelopoulos leaves behind a body of work that is as exacting, challenging and visually ravishing as any produced by the great European directors of the last 50 years. As The Village Voice's Michael Atkinson said of his work: 'Time grows gargantuan, landscapes change, masses of people engage in epochal social phenomena. It's not a strategy dilettantes should entertain; Angelopoulos, one of Europe's most rigorous film artists, stands as the master of monumentalism.'"﻿

Update, 1/29: Philippe Theophanidis discusses "a central episode" in The Beekeeper (1986) "and some general aspects of Angelopoulos's style."﻿

Update, 2/1: "Angelopoulos didn't always seem interested in solving the mysteries he put before us," writes the Boston Globe's Wesley Morris, "not even with an actual mystery, as was his ninth movie, 1991's The Suspended Step of the Stork, which starred Marcello Mastroianni as a disappeared politician and Jeanne Moreau as his ex-wife. They aren't around much. Most of the film is devoted to matters of journalistic detective work… and at its crux is a question of refugees, borders, and boundaries…. It's also typical of him to hire a star like Mastroianni then vanish him. He turned Fellini's most astral instrument into thin air. There were more important matters to investigate…. Angelopoulos was all gradual unfurling. We knew we could get the circus elsewhere, and so we did. Angelopoulos didn't want to fill another director's niche. He was undreamt Fellini."﻿

Updates, 2/2: Another mighty roundup from Catherine Grant: "Voyage to Cinema: Studies of the Work of Theo Angelopoulos."

David Thomson in the New Republic: "He worked in the belief that we could examine a film as we might a place, a person or a problem — walking around it, meditating, taking our time. And he knew that a moving camera, panning, tracking, circling, was a perfect embodiment of such thought processes."﻿

Update, 2/12: "Suranjan Ganguly, a colleague of mine at the Film Studies Program here at the University of Colorado, Boulder, recently organized a private screening of one of Angelopoulos's films titled The Suspended Leg of the Stork (To meteoro vima tou pelargou, 1991)," writes keelsetter at Movie Morlocks. "In memory of Angelopoulos and his work, Ganguly kindly agreed to answer some questions about the Greek filmmaker."﻿