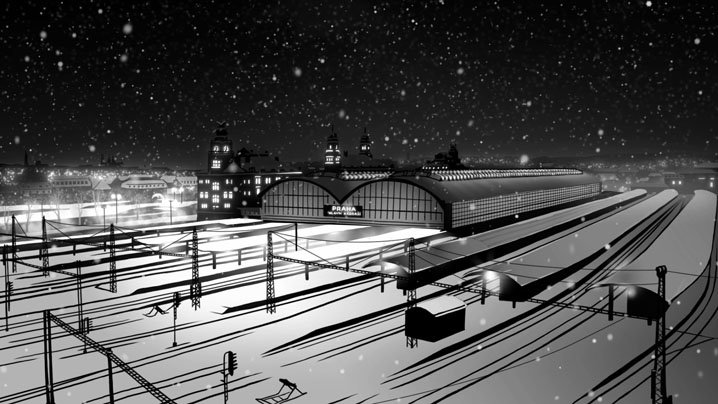 The Toronto International Film Festival has lined up 25 features for its Discovery program. All the descriptions that follow are from the festival. Additional notes and more are on the way.

Pablo Giorgelli's Las Acacias. A truck driver has been charged with transporting a woman on the long journey from Paraguay's border to the city of Buenos Aires. He is totally unprepared for the extra passenger that will accompany them, the woman's infant daughter Jacinta, whose penetrating gaze eventually disarms his gruff exterior. Subtle and poignant, Giorgelli's 2011 Camera D'Or winner is a movingly beautiful road movie highlighted by stunning performances. (See the Cannes roundup.)

Tomás Lunák's Alois Nebel. Stories from the past and present converge at a small railway in Billy Potok, a tiny village on the Czech-Polish border. The local dispatcher, Alois Nebel, is a loner who prefers old timetables to people and has hallucinations of trains passing through the station from the last 100 years. Ghosts and visions from the dark past of Central Europe – Nazi occupation, transportation of Jews, communists' revenge on the Germans – ultimately send him on a tumultuous and ominous journey.

Marco van Geffen's Among Us. Split into three segments, each told from a different perspective, this smart thriller focuses on the lives of immigrant workers in Europe. Ewa, a vulnerable and shy girl from Poland, journeys to the Netherlands to work as an au pair. From the onset, the relationship with the young couple she works for is strained as she finds it difficult to live up to their clichéd expectations. When a rape takes place in town, Ewa believes she knows the sexual predator. Having nobody to share this knowledge with further alienates her from the people who surround her.

Axel Petersén's Avalon. After serving time with an ankle bracelet, Janne, a former party organizer, travels to Bastad to open an exclusive nightclub and get his life back on track. A few days before the club's launch, Janne causes a catastrophic accident, and his increasingly desperate attempts to deal with the situation drag him into a dark downward spiral.

Milagros Mumenthaler's Back to Stay. Three sisters, bound by the loss of their grandmother, are forced to redefine their relationship with one another in their matriarch's home. Milagros Mumenthaler's debut explores the many hidden areas of human desire and the dichotomous relationships between family members, where so much and so little is known and shared. (Winner of the Golden Leopard in Locarno and, as Robert Koehler writes, it "also scored a prize for Maria Canale as best actress — an odd pick in my view, since the film is for a good stretch of its running time a ensemble drama between Canale, Martina Juncadella and Ailin Salas.﻿")

John McIlduff's Behold the Lamb. Eddie, a depressed accountant, accompanies his junkie son's girlfriend Liz on a mysterious pick up to help save his neck. Between moments of unexpected heroism and sporadic bird watching, Eddie's dysfunctional humanity connects with Liz's tortured past and a kind of healing begins.

Karl Markovics's Breathing. Without a family and seemingly incapable of coping with society, an18-year-old incarcerated boy faces a slim chance of probation. After many failed attempts, he finds a job through the day-release program at the municipal morgue in Vienna. Encountering a dead woman who bears his family name sends him on a quest to find his mother. (Cannes roundup.)

Ryan O'Nan's The Brooklyn Brothers Beat the Best. Equipped with an acoustic guitar, a broken heart, and an arsenal of children's instruments, Alex, a dejected singer-songwriter, and Jim, a self-appointed music revolutionary, set off on a dubious tour that may be their last shot at achieving their childhood dreams.

Dain Said's Bunohan. Three estranged brothers return home, each with their own path and their own fate. Adil, a kickboxer, is on the run from an illegal fight while Ilham, an assassin, hunts for his next prey. But it's their opportunist brother Bakar who propels them all onto a collision course of deceit, regret and murder.

Joseph Israel Laban's Cuchera. Based on a true story, Cuchera examines the grim fate of Filipino drug mules, drug couriers and their recruiters. It follows Isabel, a veteran drug mule, in her first attempt at running her own drug shipment operation between Manila and China.

Zaida Bergroth's The Good Son is an unsettling, modern-domestic tragedy about the small gap between childhood and adulthood. After a scandalous premiere, an actress, Leila, escapes to the old family summer house with her two sons. Ilmari, her explosive oldest son, has spent much of his life looking after his mercurial mother who has been constant tabloid fodder. The peaceful vacation is disrupted when Leila invites her artist friends over for a rowdy weekend.

Susan Youssef's Habibi. Re-telling Majnun Layla, an epic poem on a forbidden love marks the first fiction feature set in Gaza. Two Gazan students in the West Bank are forced to return home, where their love defies tradition. To woo his lover, Qays scribbles verse across walls all over the refugee camp where they live.

Ruslan Pak's Hanaan. Stas is third generation Korean-Uzbek, a people who were deported from the Far East of the Soviet Union under Stalin. He and his three friends try heroin together, sending them into a downward spiral marked by tragedy. Facing corruption, Stas leaves his job as a police detective and heads to South Korea, where a bright future is guaranteed. Will this be hanaan for him — a land of promise?

Julia Murat's Historias Que So Existem Quando Lembradas. In Brazil's Paraiba Valley, dotted with abandoned estates, ghost towns and vestiges of a short-lived coffee boom, lies the fictitious village of Jotuomba. Here, in a town that has been forgotten by the rest of the world, life rolls on at a languid pace for its elderly inhabitants. When young photographer Rita finds the town by following the unused railroad tracks, her presence, and her questioning of the locked cemetery gates, reveals the secret to Jotuomba's mystery.

Nicolas Provost's The Invader. Amadou, a strong and charismatic African man, is washed up on a beach in southern Europe. Fate leads him to Brussels where he tries to make a better life for himself. Exploited by traffickers, his daily life is slowly drained of hope, until he meets Agne's, a beautiful and brilliant businesswoman. She is seduced by his charm and force of character, while he projects all his hope and dreams onto her. The illusion quickly shatters, and Agne's breaks all contact with Amadou, who little by little sinks into destructive violence, struggling with his inner demons.

Frédéric Louf's J'aime regarder les filles. Set against the backdrop of the 1981 presidential elections, Primo, a middle-class youngster, falls in love with Gabrielle, a Parisian upper class rich girl. They soon learn they have to deal with her condescending friends who look down upon this upstart.

Ngoc Dang Vu's Lost in Paradise. Khoa, an innocent man who leaves his poor village for Sai Gon, falls in love with Lam, a male prostitute. Misunderstanding, jealousy and tragedy unfold when Lam's ex-boyfriend shows up, and Khoa discovers the truth about his career choice.

Rebecca Daly's The Other Side of Sleep. A sleepwalker. A body. A family. A small community. Arlene is like a ghost in her life. She lives in a small town in the midlands – surrounded by field after field, woodlands and laneways to disappear down and never come back... One morning Arlene wakes in the woods beside the body of a young woman. Someone watches from the trees. The body is soon discovered and suspicion spreads through the community. Increasingly drawn to the girl's family, her grieving sister and accused boyfriend, Arlene barricades herself in at night, afraid to sleep. Haunted by grief buried and delayed, Arlene's sleeping and waking realities soon blur. And all this time someone is watching her. (Cannes roundup.)

Dee Rees's Pariah. Alike, a young African American teenager, juggles family and friendships in search of sexual expression. She yearns to embrace her identity as a lesbian, but pressures from her conservative family leave her conflicted while she strives to move through her adolescence with grace, humour and integrity. (See the Sundance and New Directions/New Films roundups.)

Sebastián Brahm's Roman's Circuit. When a prominent researcher in the field of human memory returns home, he stumbles upon the fact that a man's past – as he remembers and tells it – is nothing but fiction.

Rolando Colla's Summer Games. A beach holiday in Tuscany draws families and their children together. The youngsters join into a little gang and engage in fun and games in a nearby abandoned shack. The two eldest find themselves attracted to each other despite their family problems.

Haofeng Xu's The Sword Identity. Set during the Ming dynasty, when Japanese pirates had long been eliminated from China, a swordsman tries to prove that his weapon was used by the famous General Qi's regiment to resist Japanese pirates. While attempting to prove the sword's identity, a top martial arts master finally obtains inner peace.

Emmanuelle Millet's Twiggy. When a young teenager becomes pregnant, she goes into denial. Too late to have an abortion, she is determined to give the child up for adoption immediately. Struggling with her situation, she keeps the news from her mother and withdraws into herself, while also reaching out to a young man.

Angelina Nikonova's Twilight Portrait. An upper-crust social worker with a doting husband and an enviable downtown apartment is suddenly transformed into a bizarre twilight version of herself when she is raped by three policemen.

Rúnar Rúnarsson's Volcano. This coming of age story follows a 67-year-old man who proves that it is never too late to change. Hannes is a bitter old man who finds renewed purpose in life in the wake of a family tragedy. For years, Hannes isolated himself from his wife and his now grown children. Determined to care for his wife for the first time, Hannes slowly discovers sentiments long buried within him.﻿ (Cannes roundup.)

Image above: Alois Nebel. If you're headed to Toronto, tiffr is a simple yet powerful way to schedule your festival.﻿ For news and tips throughout the day every day, follow @thedailyMUBI on Twitter and/or the RSS feed.﻿