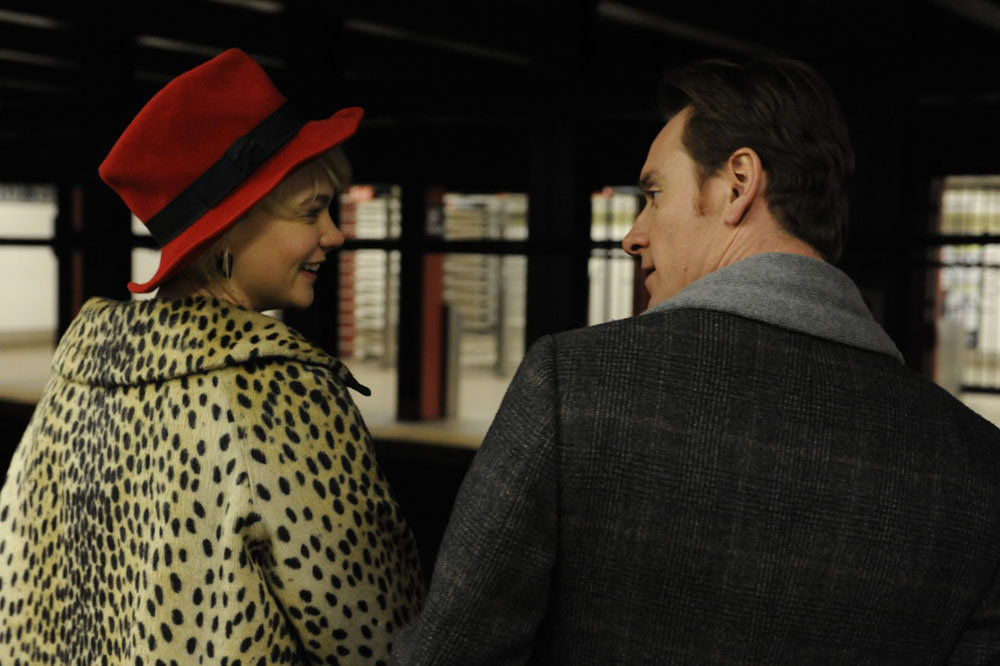 "Michael Fassbender and Carey Mulligan give dynamite performances in Shame, a terrific second feature from the British artist Steve McQueen," begins the Guardian's Xan Brooks. "Fassbender is Brandon, a sex-addicted corporate drone, directing a radioactive stare at random women across the aisle on the New York subway. Mulligan plays Sissy, his sister, who sings for her supper, self-harms for kicks and is surely pointed towards disaster. 'We're not bad people,' Sissy assures her sibling. 'We just come from a bad place.'"

"If Hunger, artist-turned-filmmaker Steve McQueen's remarkable debut feature, was a study of a body strenuously denied its fundamental needs, his satisfyingly rigorous, explicit follow-up, Shame, traces the very different damage done by a body over-gifted with wants." Guy Lodge at In Contention: "Hunger was a film that dismantled known history and re-presented it in highly sensual, imagistic terms. The new film might be a foray into fiction for its director — working from an original screenplay by British playwright and television scribe Abi Morgan — but it performs a similar trick with psychology so embedded in the popular consciousness it would appear to offer little room for surprise. Morgan's views on the human condition, and on single professional self-alienation, aren't especially revelatory (its portrait of Brandon is a more solemn essay on male ennui issues that fill monthly copies of GQ magazine), but McQueen's depiction of his narrow, clammy routine is rendered in such crisp, arresting visual and sonic strokes that his plight becomes that much more distinct. This is lifestyle cinema in the most literal, and least romantic, sense of the term."

"The film's an interesting companion piece to Fassbender's other Venice entry, A Dangerous Method," finds Oliver Lyttelton at the Playlist, "both being firmly grown-up looks into sexual lives and the causes behind them. Although to call Shame an investigation would be a stretch; McQueen only hints lightly at the back story that Fassbender and Mulligan share, one that continues to haunt them — and it may frustrate some audience members. If you're paying attention, it's all in there, however — a strange flirtatious quality to the relationship, unusual comfort with each others' bodies, for siblings — and the film is all the better for resisting any temptation to push it to the forefront."

"In scene after scene, McQueen builds an involving if never easy portrait of Brandon’s uncontrollable urges, the conflicting emotions they engender and the crippling effect they have on his relationship with women," notes Boyd van Hoeij at Cineuropa.

"In the end," writes Dave Calhoun in Time Out London, "despite so many naked revelations — so much flesh and so many encounters — Brandon remains a mystery. The film leaves us with a sense of cycles repeating themselves. There's a welcome and appropriate absence of closure, even though McQueen and Morgan are not bold enough to leave their immediate story hanging in the same open-ended and provocative way: they round off this chapter in Brandon's life with an event which is a little too conclusive — too obvious, even — for the film that surrounds it."

Diana Lodderhose has a brief encounter with McQueen for Variety.

Updates: "From an aesthetic standpoint, one can only marvel at how Turner Prize-winning video artist McQueen has transitioned from Hunger's austere study of enclosed environs to a more open, traditionally constructed narrative without abandoning the formal deliberation and moral concerns that have informed his work," writes Justin Chang in Variety. "Seeming to unfold in perpetual night, the New York-shot production treats the city not just as a seductive backdrop but as an incubator of Brandon's pathology, moving from sterile, glassy interiors to grungier environs as his descent quickens. Cinematographer Sean Bobbitt and editor Joe Walker, who both worked on Hunger, retain their aesthetic of meaningfully framed long takes and tracking shots set to a controlled rhythm. But they allow the film to breathe more naturally in keeping with its less oppressive tenor, aided by composer Harry Escott's resonant, largely cello-based score."﻿

"Fassbender is outrageously handsome in the conventional sense," writes Movieline's Stephanie Zacharek, "but in this role, there's also something guarded and reticent about his expressions. He resembles the young Christopher Plummer — his smile is gaunt and a little forced, like a death's-head grin. There's some sex in Shame, but there's only one scene that qualifies as truly sexy (his partner here is Nicole Beharie, who must share the credit), and it's so erotic, so frank without being explicit, that its culmination is devastating. I hesitate to give away anything more, but I wonder who will find this scene more upsetting, men or women? My heart sank when I saw where it was going, and I thought it was just me, but the woman next to me also gasped."

"Fassbender is incredible," agrees the Hollywood Reporter's Todd McCarthy. "It's amazing that it has taken him this long to be fully recognized, as he's got it all: Looks, authority, physicality, command of the screen, great vocal articulation, a certain chameleon quality and the ability to suggest a great deal within while maintaining outward composure, just for starters. Whether he becomes a real movie star is another matter but, when it comes to pure acting skill and potential, it's possible that Daniel Day-Lewis now has a young challenger."

And "what a gifted film-maker McQueen is turning out to be," blogs David Gritten at Thompson on Hollywood. "There's an impressive a long tracking shot as Brandon runs the length of several city blocks, using the exertion to quell his inner rage. And then there's a key scene in a club, where Sissy sings 'New York, New York' from beginning to end. It's usually performed in triumphalist mode, but Mulligan, a gifted chanteuse, turns it into a slow, mournful blues."﻿

Updates, 9/5: For Screen's Mark Adams, Shame is "certainly a mid-point highlight of the festival."﻿

"Though set in today's Manhattan, Shame pulses with the grimy vibe of New York in the late 70s and early 80s," writes Time's Richard Corliss. "Shame shares a lot with another creepy fiction of the era, Bret Easton Ellis's 1991 novel American Psycho, set in the go-go '80s and portraying the moral emptiness of a Wall Street yuppie. Back then, the porn was on videocassettes; and Patrick Bateman, Ellis' deranged protagonist, either killed and dismembered many of his sexual conquests or, nearly as bad, dreamed he did. But both men are ciphers; as Patrick said of himself, 'I simply am not there.' McQueen doesn't judge the character or probe beneath his hard surface; and though Fassbender exposes plenty of himself, he declines to open a window into whatever Brendan has in place of a soul. The director's and actor's point, boldly taken and bravely shown, may well be that for this nonstop cocksman there is no hope of change, no resolvable crisis, no there there."

Via the Playlist, more highlights from the press conference, followed by a clip, which starts around the 2:30 mark:﻿

Updates, 9/6: For Ferdinando Schiavone at the Film Experience, "it's all but impossible that it will be ignored by the Venice jury."﻿

Shame "has a wild voltage about it that leaves most of the other films in competition in Venice looking wan and underpowered," finds Geoffrey Macnab in the Independent. His brief review runs alongside Kaleem Aftab's longer overview of artist filmmakers such as McQueen, Gillian Wearing, Tacita Dean, Ben Rivers, Andrew Kötting and Mark Lewis.﻿

Update, 9/7: "First impressions of Shame are that it's an exceptionally powerful piece," blogs Jonathan Romney for Sight & Sound. That said, "I'm already beginning to wonder if Shame is all it seems to be while you're watching it. I wonder how seriously the title should be taken, and whether McQueen (and co-writer Abby Morgan) are being judgmental about their protagonist, or prompting us to be. There's a terrible sequel to the character's dark night of the soul – which involves two hookers, a gay club (not quite plausibly) and a reckless cruising for a bruising – and a sense of moral comeuppance that isn't entirely palatable. Still, Shame is a formidable, and formidably sober, provocation."﻿

Update, 9/9: "That anyone should feel a measure of sympathy or antipathy towards [Brandon] might reflect one's own experience of the insidious emotion of McQueen's choosing, which may well be the film's point," suggests Jay Kuehner in Cinema Scope. "To ratchet the drama to tragic proportions, however, misses the implicit tragedy that poor Brandon may be more of a common man than we care to admit."﻿

For Demetrios Matheou at the Arts Desk, "Fassbender dominates the film; it’s impossible to take your eyes off him, and not just when he shows a commendable lack of inhibition in its raunchier scenes. For her part, Mulligan gives her best performance to date."﻿

"Where it really wavers," finds Blake Williams at Ioncinema, "is in its suspect ideological footing and an ultimately sententious tone. Combined with glimpses of homophobia in the final reel, the lasting taste is alarmingly conservative."﻿

Updates, 9/12: The AV Club's Noel Murray reminds us that Shame is "specifically about addiction" and "at times resembles one of those old-fashioned movies about alcoholism, like Days of Wine and Roses. Granted, Shame is too raw to be corny, but the arc of misbehavior (accompanied by screw-ups at work, lashing out at family, et cetera) feels very familiar. What elevates the material is McQueen's impressionistic approach to depicting Fassbender's life of inescapable need."﻿

Updates, 9/13: "McQueen combines 80s disco-pop and 19th-century Romantic music brilliantly, in one of the best soundtracks of the year," writes Salon's Andrew O'Hehir, "and his cinematographer, Sean Bobbitt, uses the antiseptic interiors of contemporary Manhattan as no one has since Mary Harron's American Psycho. Shame isn't an easy film to sit through, to describe or to figure out, but it's riveting, spectacular, passionate cinema."

Interestingly, American Psycho has come to the mind of the AV Club's Scott Tobias as well.﻿

Update, 9/14: Method acting hasn't been taken up by too many British actors, notes Geoffrey Macnab in the Independent. "However, there is now increasing evidence that the mantle of De Niro, Brando, Al Pacino, Dustin Hoffman et al is being picked up by British actors. In films from Bronson to The Machinist, from Shame to Hunger, the likes of Tom Hardy, Christian Bale and Michael Fassbender have brought a brooding, introspective intensity to their performances that has occasionally made even their more illustrious American predecessors seem half-hearted by comparison."﻿

Venice 2011 Index.﻿ Shame is competing in Venice and screening at the Telluride, Toronto, San Sebastián and New York film festivals.﻿ If you're headed to Toronto, tiffr is a simple yet powerful way to schedule your festival.﻿ For news and tips throughout the day every day, follow @thedailyMUBI on Twitter and/or the RSS feed.﻿