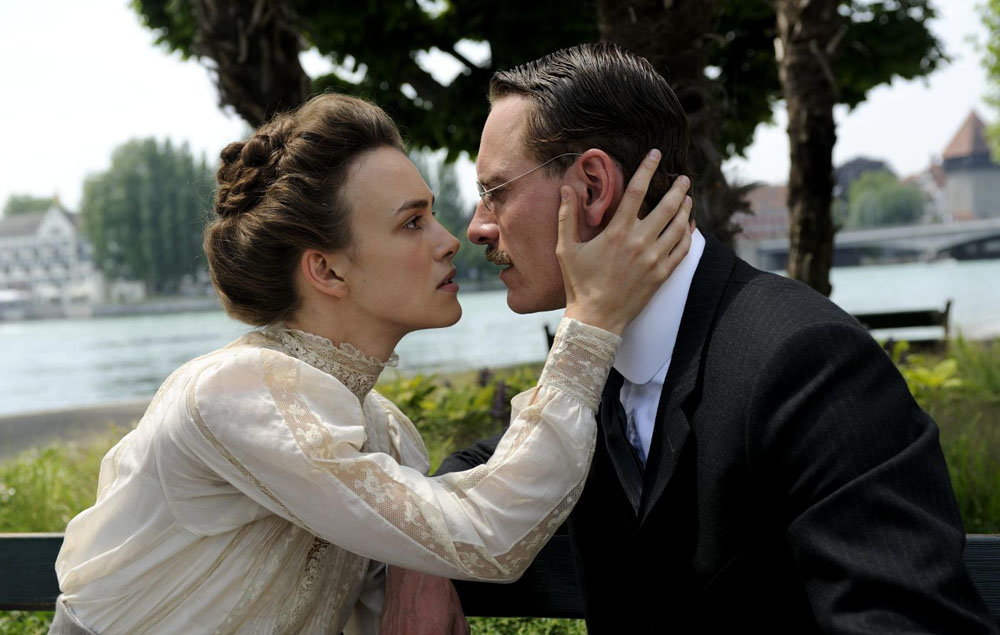 David Cronenberg's A Dangerous Method "seeks to rehabilitate the 'talking cure' as a radical, even potentially incendiary, concept," argues Richard Porton in Cinema Scope. "Inspired by John Kerr's A Most Dangerous Method, a study of the complex relationship between Carl Jung, his patient (and mistress) Sabina Spielrein, and Jung's mentor, and eventual adversary, Sigmund Freud — and more directly based on screenwriter Christopher Hampton's play The Talking Cure — Cronenberg tackles one of his favorite themes: the toll exacted by sexual repression and the danger, as well as frisson, of shedding the weight of such repression. Just as these themes were delineated with the aid of generic horror tropes in Shivers (1975), A Dangerous Method reveals the emotional violence that bubbles below the surface of Hampton's witty repartee."

"Precise, lucid and thrillingly disciplined, this story of boundary-testing in the early days of psychoanalysis is brought to vivid life by the outstanding lead performances of Keira Knightley, Viggo Mortensen and Michael Fassbender," writes the Hollywood Reporter's Todd McCarthy. "Shaking off any dusty remnants of a period biographical piece, the film tackles thorny psycho-sexual issues and matters of professional ethics with a frankness that feels entirely contemporary…. Despite having to cover stages in the trio's relationships spread over many years, Hampton's screenplay utterly coheres and never feels episodic. The dialogue is constantly confronting, articulate and stimulating, the intellectual exchanges piercing at times. Cronenberg's direction is at one with the writer's diamond-hard rigor; cinematographer Peter Suschitzky provides visuals of a pristine purity augmented by the immaculate fin de l'epoch settings, while the editing has a bracing sharpness than can only be compared to Kubrick's."

"It's amazing to think that until 1977, when the first cache of Spielrein's papers was discovered in the former Psychological Institute in Geneva (these letters formed the basis of an acclaimed 2003 documentary, My Name Was Sabina Spielrein), Spielrein existed only as four footnotes in the works of Sigmund Freud." Nisha Lilia Diu revisits the case in the Telegraph.

"The influence of Freud on cinema is so pervasive that it may come as a surprise that Freud himself has been portrayed on screen relatively infrequently," writes Geoffrey Macnab in the Independent. "We have seen shrinks in countless comedies and dramas. We have seen many over-determined melodramas from the 1940s and 1950s that play like Freudian case studies, with heroines working through childhood traumas, overcoming kleptomania or amnesia or trying to decipher symbol-laden dreams. We have seen teen rebels with Oedipal desires. Even when there has been a backlash against Freud — 'the great fraud,' as he was dubbed by the psychologist Hans Eysenck — it hasn't worried Hollywood. Freud's work has provided very rich pickings for screenwriters."﻿

Updates: Spielrein "is, she claims, 'vile and filthy and corrupt' and her greatest desire Guardian's Xan Brooks: "What the spanking can't do, unfortunately, is knock some life into this heartfelt, well-acted but curiously underwhelming slab of Masterpiece Theatre. A Dangerous Method feels heavy and lugubrious. It is a tale that comes marinated in port and choked on pipe-smoke. You long for it to hop down from the couch, throw open the windows and run about in the garden."﻿

"Few filmmakers deal with sexuality — proper, grown-up sexuality, not 'can you have sex without falling in love?' — like Cronenberg does, so in many ways a film like this is a natural fit, particularly considering an interest in psychoanalysis already shown in Spider," suggests Oliver Lyttelton at the Playlist. "As such, some might be surprised at how restrained the film is, bar a couple of spanking scenes and a sticky close-up of virginal blood. Instead, it's a film of ideas, one dominated by verbal exchanges, as you might expect considering its theatrical origins — Cronenberg opens it up more successfully than Polanski did in Carnage, but it's certainly less cinematic than The Ides of March (also based, albeit very loosely, on a play). But where it does feel like a film authored by the director is in the control, the discipline with which it's put together—one scene in which Jung conducts research on his wife Emma (Sarah Gadon) displays some of the best cutting of the year."

"The main performances are fine, with Fassbender conveying seething emotion beneath a calm veneer," writes the Telegraph's David Gritten. "But it's Knightley that one remembers, for a full-on portrayal that is gutsy and potentially divisive in equal parts."﻿

"Cronenberg has rarely shown so much restraint in his directing," writes Domenico La Porta at Cineuropa. "The decision not to give in to sensationalism by acting out the dreams (which are often evoked) is a form of particularly intelligent artistic humility."﻿

"[W]hen I first saw Viggo Mortensen done up in his trim little Freud beard, I nearly laughed out loud — not because he looked ridiculous, but because he looked so right." Movieline's Stephanie Zacharek: "Mortensen has become one of Cronenberg's go-to guys in recent years, and you can see why: Even in a period film like this one — a picture that runs the heavy risk of being ponderous and stiff — he can slip himself into the scenery with a 'Don't mind me, here in my Sigmund Freud getup' naturalness." A Dangerous Method is "never dull for a moment, which is an achievement for a movie about two guys who built whole therapeutic disciplines around the acts of talking and listening. Cronenberg is attuned to the inherent drama, and the pitfalls, in what these men did. As a filmmaker, he's as good a listener as he is a talker."

Justin Chang for Variety: "Maintaining a cool body temperature throughout, A Dangerous Method shows extreme attentiveness to the subtler peculiarities of its strange story: the way Sabina's illness frees her to slip the bonds of a patriarchal society in a way Emma cannot, for instance, or Jung and Sabina's shared enthusiasm for Wagner, which causes Freud understandable and amusing consternation even as it beckons toward the encroaching shadow of WWI."

"One of the strengths of the film and of Hampton's script (and presumably his play before it) is that the film's two distinct stories, Jung's friendship with Freud and his painful romance with Spielrein, are fully complementary and each cleverly sheds light on the other." Time Out London's Dave Calhoun: "By the time the film leaps forward for a final epilogue in 1934, you feel that Cronenberg and Hampton have succeeded in a full and telling professional and personal portrait of Jung, even if the film that houses it is sometimes lacking."﻿

Guy Lodge at In Contention: "Handled by Cronenberg with characteristic fastidiousness but a surprising lack of perversity, A Dangerous Method will delight lovers of highbrow adult cinema of discussion and mildly disappoint those hoping the subject matter augured a return to the deranged, physicality-obsessed kinkmeister of old. (One half-wishes Cronenberg and Pedro Almodóvar had traded their most recent scripts at the Kit Kat-style bar where they presumably hang out.)"﻿ 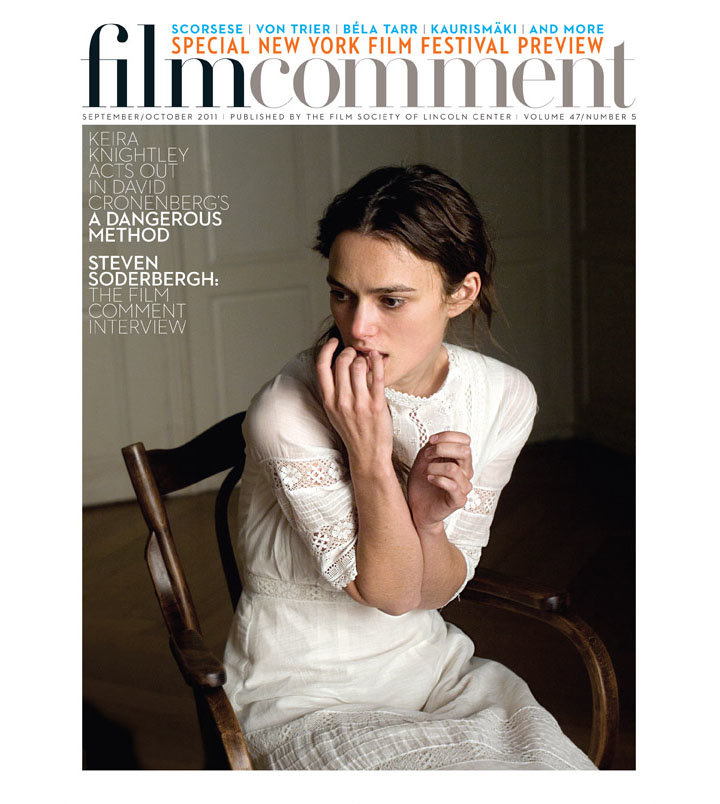 "Need it be said that Cronenberg's ongoing primary subject is the interpenetration of body and mind?" asks Amy Taubin in the cover story of the new Film Comment. "By situating a film in the world of psychoanalysis and afflicting his protagonist with conversion hysteria (literally the transformation of psychical conflict into physical behavior) he can approach the issue with almost comical directness and also from a somewhat different angle than, say, the body horror of Dead Ringers, a film with which, nevertheless, A Dangerous Method has much in common. In both films, a masochistic female patient survives the treatment of male doctors whose pathology is in no less doubt than that of the institution that empowers them."﻿

Updates, 9/3: "For all its formal restraint, the film is just as subversive and as disquieting as predecessors such as Crash and Naked Lunch," argues Geoffrey Macnab in the Independent.

Screen's Mark Adams: "As always Mortensen — in his third film with Cronenberg after A History of Violence and Eastern Promises — dominates the film and brings a much needed sly humor to the proceedings."

At the Film Experience, Ferdinando Schiavone's "first impression is that the auteur could have gone further and deeper with this material."

Film Zeit rounds up reviews from the German-language press.﻿

Updates, 9/4: "Whoever does not look for the bastard within him or herself after watching this film (which could only seem 'dry,' 'empty,' 'not all too original' or even 'disappointingly un-Cronenbergian' on a superficial level) is living in denial," blogs Barbara Wurm for Sight & Sound. "Our tendency to deceit and self-deception is stripped away the moment Spielrein confesses her masochistic desire; it is perturbed even more when another patient/analyst, Otto Gross (Vincent Cassel, magically frantic), states that a neurotic such as himself 'can't imagine a more stressful concept' than monogamy…. For all the meticulous historical framing, Cronenberg's exploration of the irrational, and of psychoanalysis as the radical turning point in the history of the mind, offers all kinds of joyful and painful transfers into the world (and body) we live in."

"The film shocks with its sheer stateliness, its almost quiet abstraction of tumultuous﻿ melodrama." Daniel Kasman here in the Notebook.﻿﻿

Update, 9/7: For Box Office's Sara Maria Vizcarrondo, "despite the way characters are divvied up into the tidy archetypes of father and son, daughter and dad, wife and woman, that Jung would make famous, you can still feel Cronenberg under the surface trying to bring forth the messiness of human behavior and body fluids."﻿

Update, 9/9: For Pasquale Cicchetti, writing in Reverse Shot, "the film, despite its exquisite technique, is too concerned with living up to its characters' names to develop a strong perspective of its own. The feeling of 'pastness' may be effective, the jargon and the psychoanalytical references may be accurate, the details may be vivid — but nonetheless A Dangerous Method feels almost harmless. And not even Viggo's perfectly held cigar can make up for that."﻿

Updates, 9/10: Fernando F Croce at the House Next Door: "The most classical film yet of David Cronenberg's classical period, this portrait of the struggle between mind and body elegantly suggests a plethora of urges, addictions, and neuroses continuously churning under its fastidious period-piece veneer."

Knightley "gives a brave if bizarre turn," finds Kevin B Lee, and her "oddball mannerisms bear witness to all the behavior that can't be reduced to words. A great film about the violence inherent in human understanding." Also at Fandor, Michał Oleszczyk: "Knightley provides a veritable twitch-a-ton of a performance that is so violently at odds with Michael Fassbender's super-composed Jung (starched and scrubbed even while climaxing), that one has to admire Cronenberg's shrewdness in casting the leading parts."﻿

Update, 9/12: "The period-piece stiffness and artifice are entirely deliberate," argues Time Out Chicago's Ben Kenigsberg. "All of the director's films deal with the split between the mind and the body; A Dangerous Method merely explores that realm from a more cerebral angle. It's also, in more subtle ways, Cronenberg's most Jewish movie, with a punch line that makes the preceding debates about repression seem deeply irrelevant — or perhaps relevant in entirely different ways."﻿

A Dangerous Method is competing in Venice and screening in Telluride, Toronto and New York before opening in November.﻿ For news and tips throughout the day every day, follow @thedailyMUBI on Twitter and/or the RSS feed.﻿